You might think techno is primarily music of the night, but personally I find it an excellent way to start the day. Listening to Aoud’s pulverising ‘1’ first thing is like showering in a rushing waterfall after breakfasting on scrambled condor’s eggs. Kier Wiater Carnihan

Cozz feat. Bas – I Need That

I quite like the ghoulish melody over the trap beat, although feel Bas’ feature steals the show a little bit from the main attraction. At least now Cozz’s friends know what to get him to Christmas. Nicholas Burman

As regular Monitors readers will know, we have something of a pre-existing relationship with FEMME. I mean, I wrote the bloody press release for this track so you’d be forgiven for thinking impartial judgement could be a little tricky. Frankly though, there’s no need for impartial judgement as ‘Gold’ is a glittering delight and probably my favourite FEMME number to date. The way it keeps pushing higher and higher has me thinking beyond contemporary efforts and focusing on proper pop royalty like Gloria Gaynor and Tina Turner instead, while the breakdown at 1.56 is a thing of beauty. Impartiality be damned, this is a belter. KWC

Another dark, techy drum’n’bass leaning tune this week in the form of Russia’s Kedr Livansky. Combining the atmosphere of a Russian winter and the sort of low-key tech of Hype Williams, ‘Sgoraet’ (translation: burning down) gets a bit of a production overhaul for its re-release on the 2MR label but loses none of its original downbeat grimace. NB

The women are stealing the hip-hop show at the moment, with Junglepussy, Dai Burger and Little Simz among those sounding angry, political and entertaining with plenty of technical ability. Lizzo was a little ahead of the curve with her 2013 debut, but her upcoming album should find her a wider audience second time around. ‘Ain’t I’ is a single in three parts, the first being a harshly delivered family tree over a contemporary bass rumble, before phasing into a jazzy movement where she showcases a soulful voice. While the final electro segment feels a little rushed, ‘Ain’t I’ certainly won’t lose her any fans and should be a stomper in the live shows. NB

Missy Elliott feat. Pharrell Williams – WTF (Where They From)

Of course, the only reason hip-hop was even there for the taking is because Missy Elliott went on leave for a while. The word’s ‘comeback single’ usually have you geared up for disappointment, and I still haven’t forgotten the embarrassing scenes of music journos scrambling to convince themselves that David Bowie’s ‘Where Are We Now?’ wasn’t a turgid snore, but Missy’s ‘WTF (Where They From)’ is different from that disaster in every way beyond the similar titles. That bass. Those bars. That walking mirrorball outfit. God, I’d forgotten how much more fun music is when Missy is around. Game over, everyone else. KWC

A prettily subdued echoing synth jaunt over a 4/4 beat. It’s not quite life-affirming but it’s warm enough to hook you in for its running time. NB

A slow, measured intro builds into an atmospheric, woozily romantic track bookended by ambient recordings of the London Underground. “I’ll help you on your way down,” sings the nameless vocalist, and whether he’s talking about the escalators to Camden Town’s Bank Branch or not, the immaculate production suggests he’ll do so in smooth style. KWC

Are we just reviewing our mates nowadays? [Our Girl’s Lauren Wilson is a pal and colleague of ours] Doesn’t matter, I like this all the same; especially the garage-y aesthetic against the intimate lyrics sang in a smoky voice, which seems to be a bit of a running theme with this lot. NB

Phèdre’s 2013 album Golden Age got a fair amount of play on my stereo that year, but I don’t remember them being quite this nuts. The vocals on ‘Tivoli’ have that same weird, wired, heliumed-up quality that made Battles’ ‘Atlas’ such a bonkers delight, and the video doesn’t skimp on the surreal either. Fishing nets as the next big fashion statement? Probably not, but I’ll be keeping my eye on Phèdre’s next collection all the same. KWC

There´s a tendency to turn off as soon as those plinky plonky Jamie xx keys make an appearance, but once in a while a band like Polo at least manage to use the zeitgeist keys in the context of a decent song. Fans of Sylvan Esso will find much to enjoy musically here, alongside a couple of zingy one-liners too. NB

Remember that band The Walkmen? I never really liked ’em much apart from that song ‘The Rat’, which seemed to punch like Manny Pacquiao when all their other tracks struggled to land even the feeblest open-handed slap. ‘Look Both Ways’ reminds me of ‘The Rat’ in all the right ways, with some added punk enthusiasm – hopefully Sievehead’s forthcoming Into The Blue album will offer access to a whole warren of similar songs. KWC

Late to the Party: featuring Queen and Shamir... 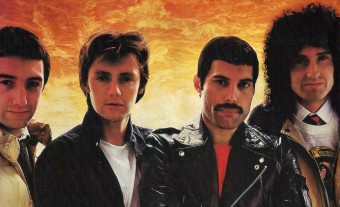 Alex Allsworth compiles more albums he's finally got round to listening to, plus brings news of his efforts to review every single Queen track ever...
Read More