This week’s singles column features the rise of Hunck, the return of Hype Williams, and what Nicholas Burman describes as “the most ultimate embodiment of ´blog music´ I think I´ve ever heard…”

The first time I listened to this I thought it was a little style over substance; the rising yell that opens the track grabs your attention but even though what follows sounds amazing, musically it doesn’t do a great deal. However, having since heard ‘Evocation’ in the context of Anna von Hausswolff’s third album The Miraculous, its gradual but atmospheric progression makes perfect sense. For those who found Chelsea Wolfe’s latest album didn’t quite tip them as far into the darkness as they might have liked, this should send them over the edge. In a good way. Kier Wiater Carnihan

I just accidentally opened this in two tabs, with about a second’s delay between the two, and listened for about a minute before I realised my mistake. Turns out it sounds a lot better when hitched to an unintentional echo. Will we ever hear the urgent, vital, adventurous Deerhunter of Cryptograms, Turn It Up Faggot and Microcastle again? On this lightweight evidence, it seems unlikely. KWC

People say artwork doesn´t matter anymore, but the visual backdrop to the SoundCloud embed for this instantly made me want to run a mile. It´s got nothing to do with the song thankfully, although I guess it ties in with the artist name *sigh*. “I just want a peng ting that talks Catalan” is quite a funny line, although this is essentially a not-very-good redo of something like ´Wearing My Rolex´. It´s stupid, pretty fun stupid, but stupid nonetheless. Nicholas Burman

The sound of guitar-based indie is so tediously over-familiar now that it takes really special song-writing to stand out from the floppy-fringed murk. This effort from Hunck actually manages it, mixing all the usual references – The Smiths, The Byrds, The Las – into such a great tune that you can’t help but be smitten. Plus the endearingly home-made video sees them cover themselves in sheets and pretend to be ghosts. It all feels like the sort of behaviour that probably shouldn’t be encouraged, but you can’t help but ruffle their hair and let them get on with it, the loveable bastards. KWC

If the Anna von Hausswolff track sounded great without really going anywhere, then the unexpected return of Hype Williams takes the biscuit, dips into a nice cup of tea, and feeds it to you for what feels like eternity (but is actually only two-and-a-half minutes). And you know what? If eternity sounded like this I wouldn’t mind a bit. If heaven has hold music, this is probably it. KWC

Ignatz – We Used To Smoke Inside

I can’t actually remember how this track crossed my path now. All I know about it is that it’s from a cassette EP by a Belgian bloke released on a label called Goaty Tapes, and it sounds like one of those bootleg Nick Drake demos after being soaked in the morning dew magic of Hush Arbors. Or in other words, quietly beautiful. KWC

I’m still not sure whether this has completely won me over or not, but there’s something to the whirring industrial beat and creeping sense of claustrophobia which is definitely intriguing. Not sure I’d fancy going on a trip to Margate with them mind. KWC

This track has a fuzzy, crackling, really engrossing production quality to it. I´m not sure the song is all that ground-breaking, but the clash of the really heavy drum beat into the synth drone creates a dramatic change of pace. NB

I´ve never much been into the American side of punk, so I feel a little unfair reviewing this. If people want a rhythm to thrash to then Metz deliver the possibility of that better than most though. The disorientating guitar and bass sounds are pretty interesting, although ultimately have me reaching for that Girl Band record… NB

Son Lux has already produced one of my favourite tracks of the year with ´You Don´t Know Me´. This track isn´t as grandiose as that, but the shuffling time-frames and squelchy bleeps work well with Bell´s choral vocals. NB

This is the most ultimate embodiment of ´blog music´ I think I´ve ever heard. NB

Tasha the Amazon – My Level

Yep, I like this. Like her cutting vocal delivery in the verses, the gothic musicality and video style screams iD Magazine, but thankfully with a bit more grimacing substance than that might suggest. The chorus smooths the edges off a little too much but everyone needs a meme in 2015, I guess. NB 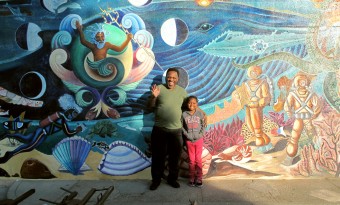