In the first of a new feature on The Monitors, we present the eleven finest music videos we’ve seen over the last month (not including the three we premiered by Strauss, Dooks and Phall Fatale)…

Nothing amateur about this Amateur Best video, which features nuns, gongs, Hannibal Lecter masks, esoteric scribblings and a singer who looks a bit like Mickey Rourke playing Jim Morrison during his beardy phase. Frankly not the elements you’d expect to make up an electro-pop promo, but the choreography and cinematography in this black-and-white clip are so sleek (as is the track for that matter) that it works anyway. No idea what it all means, but by the time that sax solo comes in around the three-minute mark, who gives a damn?

Apparently the team behind this gorgeous video used a ‘light painting machine’ to create their beautifully slick and perfectly synced imagery; I have no idea how that works, but it’s basically like that light trail effect you get by waving your camera around when taking photos at night with a long exposure. Except really good, obviously. The track, by Floating Points, is suitably lush as well. First class effort all round.

Over 5,000 printed photos were utilised in the painstaking making of this video; no doubt director Charlie Tyrell was glad Keita Juma’s dark, grimy track doesn’t last more than two-and-a-half minutes. The Hockney-inspired animation technique is, much like the track, effectively executed thanks to a minimal but well-judged backdrop. What’s more, in this day and age, it’ll lend itself well to promo gifs and snapchat clips too…

The first of two videos in this list to feature a party political broadcast from David Cameron, although sadly both were completed too early to contain any reference to #PigGate*. Don’t worry though, as this impressive promo for Darkstar does feature a healthy dose of bizarre interspecies interaction; a mundane supermarket nightshift takes a sudden turn for the surreal when the manager turns out to be an anthropomorphic koala bear. Add in a dirty protest and a bit of reversed bestiality, and the whole thing quickly becomes a nightmarish vision of the Big Society. Broken Britain indeed.

Tindersticks have never been shy to undertake a soundtrack commission, so it’s no surprise that their new album The Waiting Room is a collaborative film project, with an impressive array of directors producing visual accompaniments to the songs. ‘We Are Dreamers!’, featuring Savages’ Jehnny Beth, is the first look-and-listen and doesn’t disappoint. The visual, a comment on the powerlessness of the individual amidst global industrial concerns (maybe), not only communicates a dreamlike sense of vulnerability and futility, but also feels weirdly reminiscent of Time Bandits. Which is never a bad thing.

The phrase ‘refugee crisis’ has been repeated in the media so much recently that it’s started to lose its meaning. This video, a collage of news footage taken from a variety of sources, provides a necessary reminder that there is a genuine, harrowing humanitarian crisis behind those words. The track itself, by Finn Vine and Tom Vek’s side-project The Fax, is available to buy here, with all proceeds going towards the Migrant Offshore Aid Station and The Refugee Council.

It’s strange being old enough to remember a time when this sort of computer animation would’ve been cutting edge, and it’s even stranger that this HeCTA music video manages to transcend simple nostalgia and become actually affecting. We generally try to avoid regurgitating press releases verbatim, but the comments from director Chris Shepherd explain the story behind the clip better than any rambling gubbins I can muster:

“It felt like the Human League/Heaven 17 vibe of the track screamed out for something visually similar to the ‘Money for Nothing’ promo by Dire Straits. I also thought it would be cool to collaborate with RTS award nominee and Kingston graduate Jez Pennington, whose graduate film Pigeon Kids is a story of urban alienation in a world of CGI.

“Myself and Jez were really into the idea of getting data moshing into the promo. We wanted to get a sense of abstraction, where the music becomes so powerful it breaks the images apart. There’s a great bit in the promo for David Bowie’s ‘Loving the Alien’ where the image breaks apart as the music hits a peak. I love the power of that idea.

“The story is about a father and son who don’t communicate. The son tries to reach out to his dad, but is he cold and remote. It’s not till he thinks he’s lost his son that things change. They are like ships passing in the night. But will they collide?”

If in doubt, mash together a collage of vintage footage including as many sci-fi shots as you can muster and, if possible, at least one giant hypnotic eye. It’s a formula that never fails, and Memphis garage punks Nots pull it off with aplomb here. (It helps that the track is a banger too.)

A second appearance for Girl Band on The Monitors this week following the release of their uncompromisingly brilliant debut album. This video by Bob Gallagher, in which our hero possesses a television for a head, would seem to be a warning about the dangers of becoming what you think people want you to be rather than what you are – especially if what you are is a man with a television for a head, and especially if that television insists on showing Girl Band videos all the time. Although that doesn’t sound like the worst affliction to be honest.

OK, full admission, this video mainly makes it into this inaugural MPEGs Eleven due to the fact it seems to be wholly based on Arsenal’s away kit circa 1992-93. And why not? It is a thing of beauty after all. This retro vibe dovetails nicely with the VHS-style video and the gently psychedelic electronics of the music too – it seems Flamingods and My Panda Shall Fly have got everything Wright (Wright Wright)…

This month’s line-up is completed by JaJa OK, formerly known as Francobollo, a band with a reputation for making excellent music videos like this one, and this one, and especially this one. Luckily the name change doesn’t seem to have to have had a negative effect on the quality of either their videos or their music, as evidenced by their latest effort ‘Gimme Your Money’, which sees singer Simon Nilsson recast as a big-headed Prime Minister (is there any other kind?). Corbyn, Boris, Hague, Clegg and Farage all get their moments in the spotlight too (although Hague fudges it as usual), and ultimately the world is destroyed. Not that dissimilar to real politics then.

There’s even a disturbingly prescient scene where something unsettling seems to be happening just out of shot beneath waist height – we can only hope no pigs were harmed during the making of this video.

*Actually, after posting this article JaJa OK tweeted us to say there was in fact a reference to #PigGate in the video. See if you can spot it… 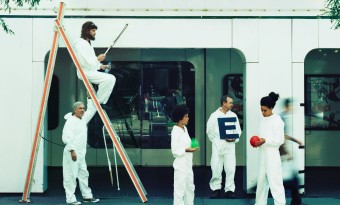 What do you get if you mix Pedro Almodóvar, Hot Chip, Right Said Fred and a couple of overly attentive stylists? Phall Fatale's fantastic new video, that's what...
Read More