Saturday evening saw the return, after three years away, of Blur to the Hyde Park stage. Having borne witness to one of their wonderful reunion gigs on the same stage in 2009, I had decided to give their 2012 Olympics show a miss. However, with a new album, The Magic Whip, to go and experience live, it would have been perverse not to make the pilgrimage to central London once again.

Blur were performing on Saturday as the headline act of the British Summertime Festival. Not that there was much summery about our day in the park. By the time the impressive-looking stage had been assembled and the band had taken the stage to the strains of ‘Teddy Bear’s Picnic’, we had already been subjected to one heavy shower and a couple more that felt like insult to injury. But, lo, the clouds did part and Damon led the band out onto the stage, arms thrusting into the sky.

“Let’s fucking have this!”

Appropriately, given the weather, it was the squally guitars of one of The Magic Whip’s many highlights, ‘Go Out’, which opened proceedings. Whilst Damon has always had, in the words of Miranda Sawyer, “a way with a pretty tune”; Blur have equally, thanks to Graham Coxon’s guitar work, sounded just as good when getting down and dirty.

With the backing singers beefing up the “O-O-O-O” (repeat ad infinitum) backing vocals, we were off to a great start. ‘There’s No Other Way’, the only track to be dusted off from 1991’s debut album Leisure, got people’s feet and hands moving in a more serious way, with Coxon’s supercharged riff front and centre.

Set against this, The Magic Whip’s curtain raiser, ‘Lonesome Street’, suffered a little. Though the opening lines, “What do you got/ Mass produced in somewhere hot/ You’ll have to go on the underground / To get things done here”, seemed quite ironic as I considered the lady in front of me who seemed intent on taking as many photos as she could. Which, surely, was ultimately pointless – cast as we were behind a barrier just behind the mixing desk, essentially miles out to sea.

‘Badhead’ provided the first real, “Ahhhh!” moment for me and was the first of seven tracks to be unfurled from Parklife, six of which were also played here in 2009. Twenty-one years later, it’s this album, unfairly I think, dominating their set lists. Don’t get me wrong, it’s a classic album, of course it is, but then so is Modern Life Is Rubbish. And 13.

Anyway. Somehow, in a park full of thousands of people, Damon still managed to imbue the almost ad-libbed “I know” which closes ‘Badhead’ with the necessary resigned tenderness.

‘Coffee & TV’ provoked the first real sing-a-long and also, the brief return of the rain. On ‘Out Of Time’, Graham’s guitar work again reminded you exactly what Blur lost when Coxon departed the band in 2002, before a slightly slower than I’m used to ‘Beetlebum’ lifted the Hyde Park crowd out of their shoes. It also provoked a 6’4″ guy to plonk himself in front of my tiny mate Jen – until she shamed him into returning to his position behind her.

The dubby ‘Thought I Was A Spaceman’, featuring the beautifully contrasting vocals of Messrs Albarn and Coxon, cooled things off a notch. This led into a version of ‘Trimm Trabb’ which started off so drowsily it almost seemed to be going backwards. Was Dave Rowntree falling asleep on his stool? On the screens we could see Damon clasping hands with the front row, seemingly trying not to laugh as he intoned his words. It seemed like the song went through about three gear changes to get to its screaming crescendo. In keeping with this mood (the drowsiness not the crescendo), ‘He Thought Of Cars’ was a welcome addition to the setlist, even if Damon did appear to fumble his words at one point.

With Damon nodding to the mosh pit, ‘I Broadcast’ signalled a change of pace and then… ‘Trouble In The Message Centre’! My favourite Parklife song and one that I had given up all hope of ever hearing played live. With Graham doing the “No calls today dear, they just have to wait dear” bit… well, I thought it sounded fantastic.

From here on in, Blur were on the home stretch. ‘Tender’ was taken over by the now traditional crowd sing-a-long, with “Love’s the greatest thing” displayed in many different languages on the screen behind the band. Phil Daniels arrived for an ice cream and ‘Parklife’, with Graham’s staccato riffing and Damon’s scurrying about the stage really whipping the crowd up, before ‘Ong Ong’ led into the explosion that is ‘Song 2’.

The beautiful ‘To The End’ saw a giant mirrorball dominating that screen, before the peerless, timeless, ‘This Is A Low’ concluded the main set in fine style. It would have been a wonderful moment had the constant chatter behind me not been so audible. 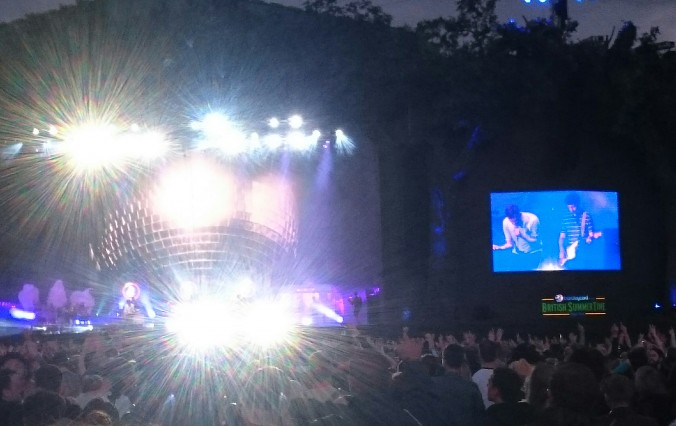 After a brief pause, and a “Oh my baby / All the people” battle in the crowd, the boys were back and malfunctioning their way into ‘Stereotypes’, a much funnier song than I remembered it being. The indie disco of ‘Girls And Boys’ finally made its inevitable mark on proceedings and got everyone dancing one last time.

It was almost over now. With the darkness now fully descended we were heading for the emotional 1-2 sucker punch. First off, Damon’s most famous love letter to the capital city, ‘For Tomorrow’, saw me with tears in my eyes for the first time.

Dedicating it to a lovely old lady named Ethel, Blur swung into the final song of the night. I never had much regard for ‘The Universal’, until I heard it in Hyde Park in 2009. It has a way of destroying any irritation you might have felt at being surrounded by people talking through songs that you know and love and want to hear. It reduces the (on this occasion) vast space between you and the band and, really, it just sums up everything great about these old Essex dogs. It makes you want to sing along, punch the air and at the same time, as I’ve got older, I’ve really begun to appreciate the poignancy of its call for you to just let your days go.

On reflection, perhaps it’s not Blur’s best song – at least not in my book – but the song that most powerfully articulates the melancholic euphoria that lies at their heart. Maybe I’m just talking rubbish. I don’t know. I do know that as we left the park on Saturday night, all the earlier irritations of the day (and it was a long day…) well, I’d just let them go.

It really, really did happen. Thank you, Blur. 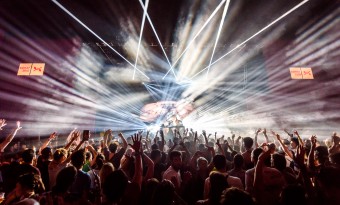 From the resurgence of grime to the PC Music lot looking confused by a synth, there was plenty to see at Sonar this year. Here are Nicholas Burman's highlights...
Read More