It’s been just over a week since the absolutely incredible Raw Power festival drew to an inevitable but devastating close, forcing me away from its warm, feedback-drenched, music-loving embrace and back to the grey silent reality of everyday.

Well I say silent, I’m still hearing aural echoes from the musical equivalent of the Big Bang knocking about the deserted landscapes of my ears, as a distant hiss crashes around my tubular lugholes and reminds me of what I’m now missing.

Fuck, I’m only just about done collecting up the little broken shards of memory-containing brain flab which was totally bashed out of my nostrils and left strewn across Tufnell Park dancefloors. Now to make a concerted effort to start gaffa taping them back together, in an attempt to form my garbled thought-bubbles into some form of written word-based sense making sentences. 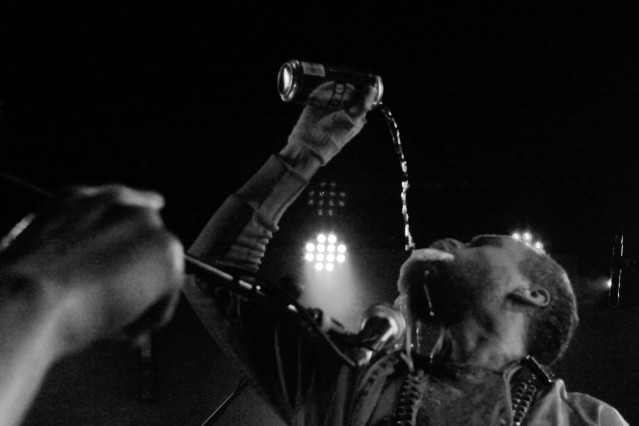 How the people at Baba Yaga’s Hut put such a fine, fine weekend together is genuinely nothing short of remarkable, and the scores of wonderful people who I drunkenly chatted to throughout the weekend had nothing but fawning praise and love in their bleary eyes for the weekend. Anthony Chalmers and the gang deserve bloody medals of gold I tell you.

Ramming more bands than a noisily bangled belly dancer into Tufnell Park’s The Dome and The Boston Arms Music Rooms, Baba Yaga’s kicked the festival right off in pulsating style with the duo-drumming madness of Luminous Bodies. What a way to start. They’re a bloody entertaining watch, so the weekend begins with a massive smile on my dopey face. 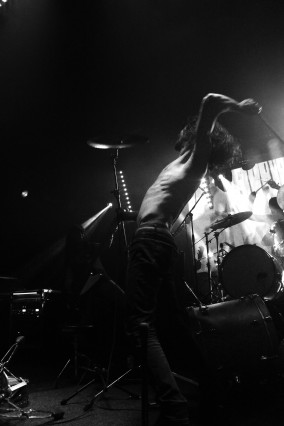 This is then turned into a deep, serious furrow as I try to keep my mind from imploding during Gnod’s excellent set of psychedelic noise madness. It seriously left me feeling inside-out, so to save a complete breakdown of the senses it was time to head home in preparation for Saturday, which was looking like a belter…

… And it absolutely was. Anji Cheung and Hivikolari are early surprise treats, before Newcastle noise bastards Pigs Pigs Pigs Pigs Pigs Pigs Pigs completely take the stage apart. Though the start is beset by early guitar problems the band shrug them off and throw themselves into their set like true world-beaters. Pigs x 7 were fucking speaker-climbing rock quality. Downstairs The Wharves were as great as always, so don’t miss them if you get the chance. 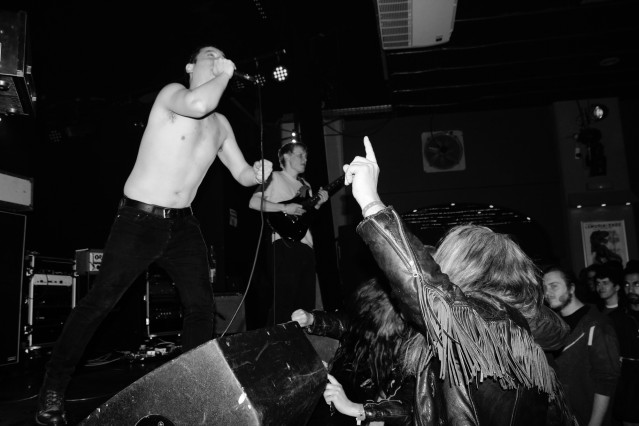 I’d oddly/foolishly always thought Esben & The Witch were some sort of nu-folk band like Mumford & Sons or Noah & The Whale (you can see I was probably thrown by the ‘and’ in their names like some sort of ignorant wiccaphobe goat). Thus, I’d avoided seeing them until now. It was a good thing I did watch them this time and was taught a valuable lesson, as they were damn good and not in the least bit like the two bands I have just unfortunately mentioned. Their guitarist even looks like a slender Dr. Robotnik for good measure. How can that not be a good thing? 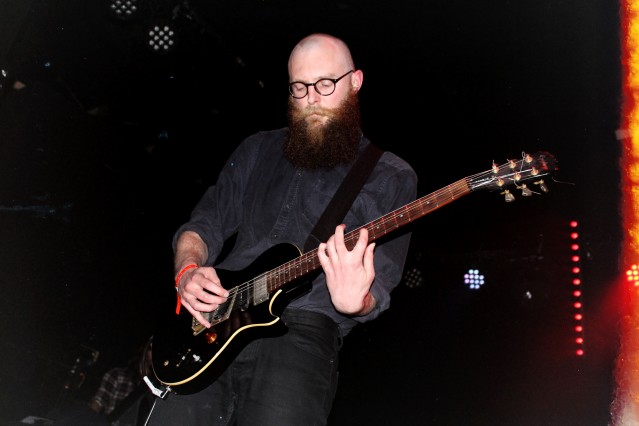 After having some of the excellent burgers provided on site (the food stalls provided totally lovely foodage), I was looking forward to seeing Sloath and watch them in a sort of distanced, food-addled daze. Like being stoned on meaty goodness. They slay nonetheless. A broken bass string mars the opening of Good Throb’s set, but once re-started they’re a great whirl of panic-attack-riddled suburban shouty punk fun. Go and download their album. Go on. 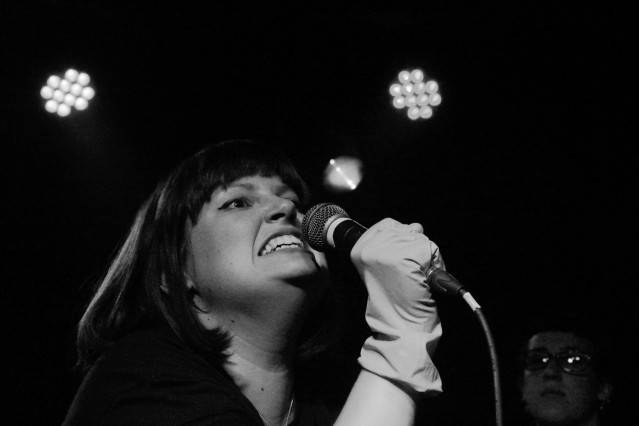 Underground super-band Sex Swing were as brilliant as you may have heard they are. Weird, distorted sax-noise fumbling its way through crunchy guitar and pained vocals. The legendary (and devilishly nice chap) Tim Cedar menaces away on keys creating a mesmeric and hard to describe noise; like Gnod on the Friday, it’s oddly unclassifiable and totally bewitching. 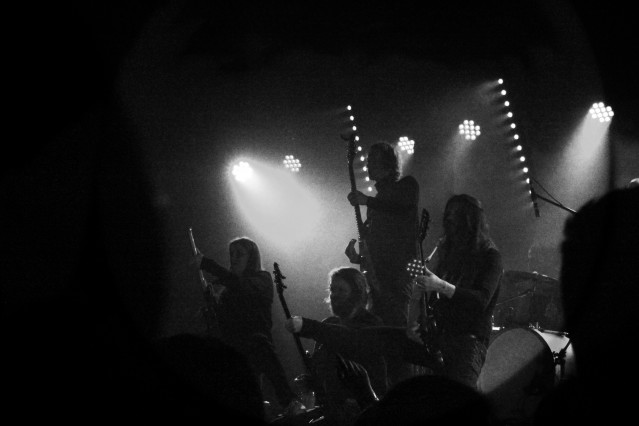 Earthless take a final crack at breaking my noggin’ as the evening comes to a close, guitar soloing away like Slash on mushrooms in the desert, at night. They are tighter than a very tight thing in a small matchbox in a vacuum. It was time for me to head into my own little vacuum and try to cling onto reality, for one more day at least. 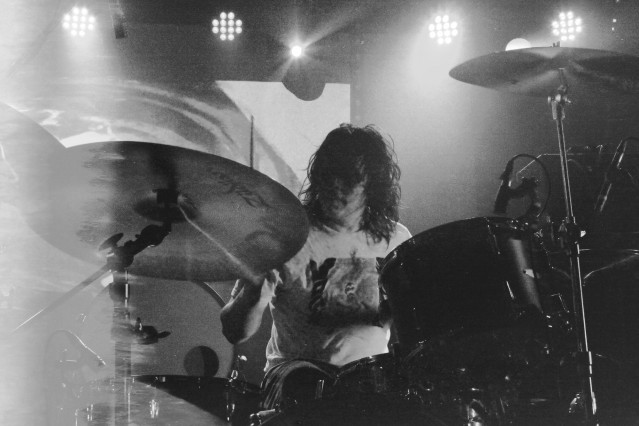 Well, Sunday totally kicked the fuck out of reality I can tell you! By the end I was smashed off my face and my head was filled fit to bursting with new faces and more righteous music than I can handle. My skull felt like the ghost vault used in the 1984 film Ghostbusters; you know, the one where they put the traps to store all them ghosts what they capture at the end of each day. The one that duly explodes, spreading rampaging carnage all over the gaff. Well that’s how I felt after Sunday.

Metamono were fantastic. Dressed like steampunk laboratory assistants they ease us into Sunday morning with some lovely, tuneful electronic dance music. 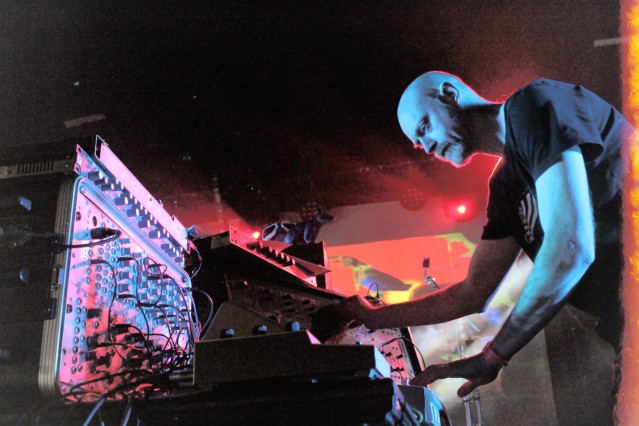 Downstairs Ye Nuns are right good fun. Essentially a tribute act to garage rockers The Monks, Ye Nuns knock through their riotous set with ease and charm, and the crowd bloody loves them. 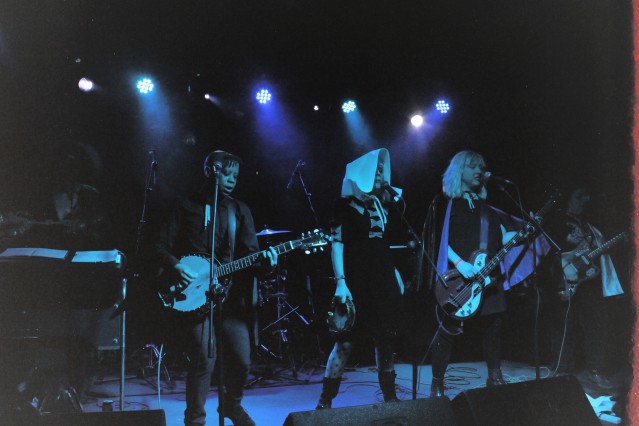 Blown Out are seriously, I mean seriously, fucking good. Featuring two of the chaps from Pigs x 7, they take my slowly pickling brain into the cosmos and leave it somewhere quite hard to find. (Possibly underneath a rock on the surface of Jupiter or Saturn. These things are always in the last place you look for them, innit.) 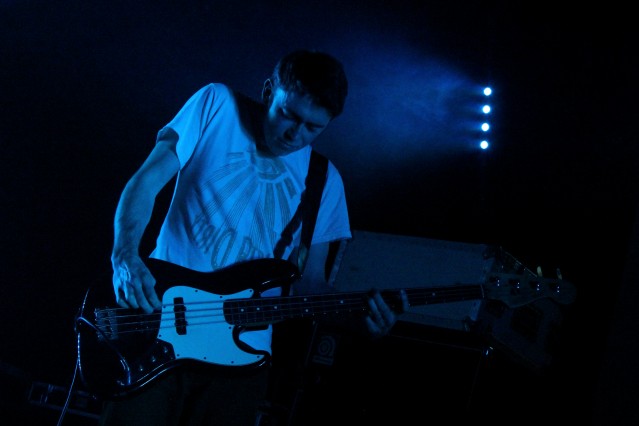 That Hey Colossus were immense should come as no surprise to anyone, and it wasn’t a surprise. They are immense as standard. I will never have too many nice things to say about Hey Colossus, so find me later and ask me about them and I’ll happily rant away at you for a good three quarters of an hour to a full hour, about my professed love for them. It’s very much professed. They booted in the nearby window and flung my spongy thought muscle out onto the nearby street like some sort of disgusting viscous rugby ball. 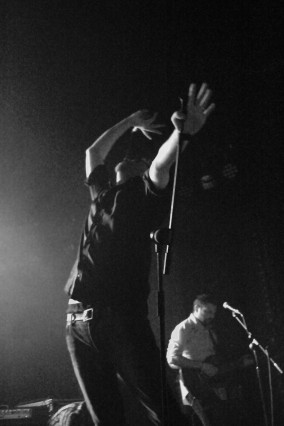 With the festival soon drawing to a close it’s left to The Cosmic Dead and Circle to finish me off. And sure enough they do. Circle (who share three members of Pharaoh Overlord) are still lingering in my mind like a hot pants wearing Slimer (from Ghostbusters again, if he had legs), and as the night slips away into shots of liquor and manic dancing, the festival is over all too soon and I’m left picking up the broken pieces. But what a way to go to pieces. 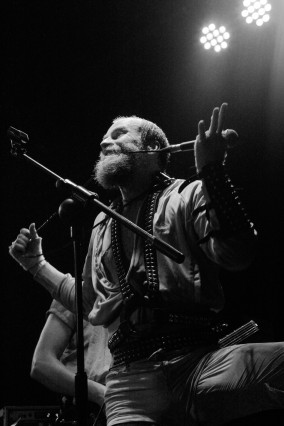 Not to get all teary, but Raw Power 2015 was an absolute pleasure to be at; the bands were incredible from start to finish. Many could be found chilling out, having a pint and chatting about how great the other bands were in the courtyard, which really created a sense of togetherness you’d be hard pressed to find anywhere else. 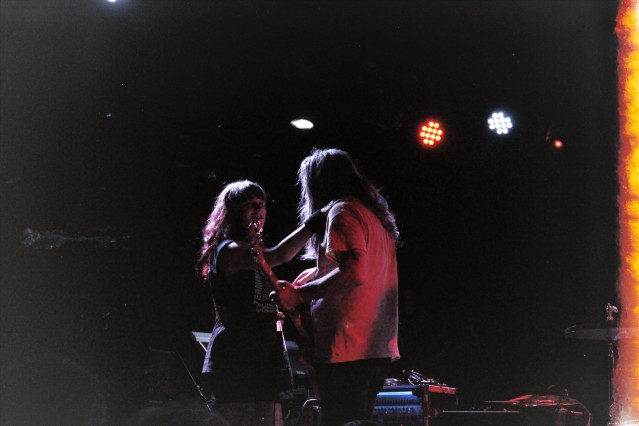 Turns out that the real ‘raw power’ here is genuine, good old-fashioned fun. Sickening isn’t it.

See you next year, when I’m hopefully fully gaffa-taped back together.

(Don’t worry I’ll use staples if I run out of tape.) 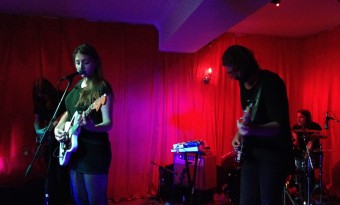 Dreamy Gothenberg duo Pale Honey were told to “Go Home!” during their first gig in the UK, but hopefully they won't be taking that suggestion seriously...
Read More