Despite warning others against the idea, I have indeed spent my March ricocheting around Shoreditch in a laser-induced daze, courtesy of Glenn Max and his marvellous programme of events at the second ever Convergence festival. Now that I’ve had some sleep and un-learned my route home via Village Underground, here are some thoughts on this year’s offering, and on how the festival looks set to shake up our Marches for years to come.

The handy thing about Convergence’s theme of art+technology+music is that it appears to carve out a niche for itself in the crowded festival calendar, but at the same time 99.9% of musicians nowadays can claim to bring these three elements together in at least a tenuous way – whether that’s acoustic Gruff Rhys’ recent multimedia journey into his Welsh ancestry, or – any excuse to mention my favourite thing ever – Beyoncé’s stratospheric Billboard performance of ‘Run The World’. It’s certainly the case that some events at this year’s Convergence met the criteria head on, whilst others went for a more subtle (or coincidental…) take on the theme…

Top of the class was Radioland, Matthew Bourne and Franck Vigroux’s reworking of Kraftwerk’s Radio-Activity (also top of the class was Bourne’s beard). Which makes sense really, given the album’s status as the harbinger of the electronic music era. Antoine Schmitt’s live video installation perfectly captured the foreboding sense of future which pervades the composition: using only white dots and lines against black, Schmitt conjured up a dark vision of existence both at a molecular and a universal level, sending delicious chills up and down all our spines. About halfway through the animation did end up resembling something like Snake II from hell, but generally speaking I think Kraftwerk would have nodded in mechanical approval, and so did I.

Perfectly enacting Kraftwerk’s 1975 premonition, the opening and closing parties featured a series of electronic heavyweights. Village Underground was packed out and buzzing on the first night, where Vessels’ double drummer show didn’t disappoint, creating the bizarre sensation of ‘live’ techno. Clark then opened with the arresting video for new track ‘To Live and Die in Grantham’ before giving way to a pulsating set with irresistible intensity. He’s a good’un is Clark.

Similarly, Pantha du Prince and Darkstar drew in the crowds for Convergence’s final night, which due to demand was relocated from the relatively cosy Village Underground to the kitsch and glitz of Troxy in Limehouse. I did feel a bit sad to leave the Village Underground for that final night; up til then it had proved a trusty venue for an incredibly diverse series of shows, and defied the physics of its high ceiling to achieve a fantastic quality of sound. The hike up in size at Troxy meant that the atmosphere was pretty school disco for most of Darkstar’s set, but with the 2am arrival of Pantha du Prince, the expanded dancefloor became well justified.

My only grumble about the festival would be relating to the Monday night ‘Boom Room’ event, which the Institut Francais had billed as a pioneering reverb experiment. Unfortunately, the tough Monday night crowd needed a fair bit more guidance on what to be listening out for. I had envisaged a pop-science explanation growled at me with a throaty French accent before listening in wonderment to a mind-boggling sound installation. Instead there was just a series of rather mismatched artists who barely deigned to speak a word to us, and no one really knew what was going on.

In fairness, the opening DJ set of Ben Osbourne – funk-inspired, overlaid with live saxophone – together with Mental Overdrive, was all pretty danceable… although the name of the latter does sound like a pisstake, as my gig buddy realised when he tried to caption his night on Instagram. French producer Saycet then had some nice ambience and dreamy visuals, but his introspective electronic sound was at odds with Andrew Weatherall’s strange brand of reggaedub (including a reggae-fied Dr Who theme… just no) and then even more at odds with an awkwardly self-indulgent guitar-out from White Noise Sound.

The stand-out night of Convergence this year was undoubtedly Thursday night’s Tropical Beats Party, where music, art and technology did feature, but in the end the whole thing gave way to the human, the social and the dancefloor. The too-cool-shackles of the Monday night were cast off as the performers – shock horror – actually noticed that us, the crowd, were there too.

Alo Wala got the night off to a cracking start, turning up with waist-length silver braids and a futuristic visor, and delivering a gutsy performance to which the label ‘Indian-inspired hip-hop’ just doesn’t do justice. She also made one guy’s life when she noticed the moves he was pulling and got him up onstage to dance to ‘Cityboy’.

Skip&Die continued to blur lines between artist and audience when goddess-like frontwoman Cata Pirata jumped down to ground level and sang the middle part of the set in the midst of a euphoric crowd. Swapping instruments as quickly as they jumped genres, Skip&Die’s energy was contagious and had me tying my winter coat around my waist in order to summon up the most summery dancing I could muster. Apologies to those in my nearby vicinity.

The night was rounded off by Batida, Pedro Coquenão’s fusion of modern electronic sounds and Angolan ’70s rock. The fact that by the mid-way point the entire room was unabashedly getting down to a song which consisted of yelling ‘Bazuka’ over again showed the extent to which the party mood had taken hold. That’s not to say the show’s political message was lost: it’s difficult to explain how Coquenão struck the balance between approaching the sensitivities of Angola’s war-ravaged modern history and keeping up the night’s momentum, but he cracked it, and we danced all the way home, cheerfully blowing the whistles that were thrown out to us during the final song. If you get the chance to see any of these guys this year, do not let it pass you by.

So that was my Convergence festival – which in actual fact was only a sliver of what was happening in Village Underground and beyond in the middle of March. Not wanting to go all Michael Eavis on you, but there really is something for everyone, and it’ll be well worth taking a good look at the line-up next year and sprinkling your spring gig calendar with an exploration of the relationship between music, art, and technology. Or, to put it another way, just having a bloody good time. 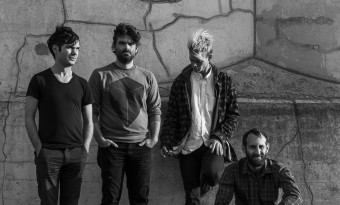 Viet Cong are so good live they broke Anna Katrina Lockwood's arm! OK, not exactly, but their dynamic counterpoint and rhythmic interplay is almost worth splintering a limb for...
Read More