The Mancunian Rock ‘n’ Roll tourist board is out in force this week, as some familiar faces kick off our singles round-up…

I love John Cooper Clarke, and I’m probably the only person under thirty who owns an Inspiral Carpets record. However, I do get bored with old mods banging on about how good Manchester was – that’s why 6Music gets turned off after Lauren Laverne.

While ‘Let You Down’ lacks originality, and is accompanied by an awful video, the song itself is by far not the Carpets’ worst, and seeing as they did the ’60s renaissance thing first they get away with it. The organ lines are playful and the baggy bassline is done far better here than by many of their contemporaries. It’s Clarke’s verse which makes no sense though, his poetry has never worked to music (unless someone else edits the phrasing, as Alex Turner did) and ‘Let You Down’ doesn’t break the cycle. [Editor grips his copy of Snap, Crackle & Bop and bites his tongue]

Slug – Running to Get Past Your Heart

On the face of it this is one of the most non-single singles we’ve had on Single-Minded. This strange afro-grunge alliance is anti-structure (intro leads to chorus leads to middle eight to a wet synth outro which would sound shit anywhere else). As it is, ‘Running…’ sounds like a late ’80s New York gem everyone’s forgotten exists, its weird amalgamation of styles creating charisma instead of chaos.

Neo-Americana is still not doing anything for me. At least with Balthazar you get a bit more bite than, say, The War On Drugs offer. The politics are commendable, but comes and goes within a couplet and offers no context. If you’re going to do a Dylan impersonation (vocal intonations and all) then you’ve got to do a bit more than down-the-line romance. The light touch harmonies are pretty enough but the track never takes you anywhere other than back to the beginning.

Another new Chicago MC creating a bit of a buzz, featuring a fuzzy bassline and a bouncy vocal style. ‘Cheap Champagne’ never quite kicks in enough though to sound more than a good idea which was never fully realised.

Callum Pickard and the Third Look – Lonely Boy and Girl

To cut to the chase, this is Jake Bugg junior, so if you like Jake Bugg you’ll like this. A soft acoustic guitar number with a nostalgic ear (and eye, with the video a series of clips from ’40s black & white film Double Exposure), it’s a bit emo in the right places, and it has saxophone! If Pickard gets a three minutes thirty radio edit into the Radio 1 offices they’ll probably weep with joy.

What’s this, an indie rock re-imagining of ‘Bills Bills Bills’ by Destiny’s Child? But why? No, seriously: why. Constituent parts show promise; a Prince-like swagger, a Gospel-esque chorus, all tying in with a downtrodden blues heritage. Unfortunately the grit is lost amongst the clutter.

Alex Winston – We Got Nothing

Never has a pessimistic realisation sounded so positive. Nice chorus, but where’s the rest of the song? ‘We Got Nothing’ is another track which does one thing really well, but doesn’t change much from the starting gear – it sounds like she couldn’t even think of a way to end it.

Another bout of pessimism here, as the Brooklyn band recite “this is the end” over a clock-like rhythm. The bridge would sound like Queens of the Stone Age if it wasn’t drowning under its own production. It’s all too washy to make an impact.

‘Dumb’ is a bizarre eurotech track, with the pensive vocals citing “basic bitches” before “dumb” is repeated over an obnoxious Steve Aoki-like drop. Never has a song been more aptly titled.

Seemingly making a break from the ultra-traditional mainstream culture which gets the country so much negative press, ‘Night’ is a pulsating four minutes of techno from the dark heart of Russia, weaving an intense path around a dancefloor in your mind. Until you hear it on an actual dancefloor, at which point gurn yourself stupid.

KNOX – Out On A Limb

A hushed, echoed vocal steps delicately around its cinematic surroundings. The sister/brother duo create a dense atmosphere out of not not doing too much. What’s even tastier is the Moon Bounce remix on the B-side, which adds a sharp boost to proceedings and edits in some schizophrenic harmonies with stargazing wobbles. A track of the week is a B-side, who’d have thunk it?

FEMME – All That She Wants Is A Fever Boy

And for desert: here’s a mash-up from one of our favourite underrated pop acts, FEMME. Taking cue from her hip-hop sampling influences she blends her own ‘Fever Boy’ and ‘SOS’ tracks with Ace Of Base’s ‘All That She Wants’ and a melee of other tunes which’ll make you go “oooh that one…” 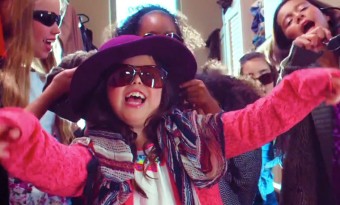 11-year-old pop star Sophia Grace's debut single is refreshingly pure of heart - so why has it been given such a cynically money-spinning video?
Read More