Now listen here Sonny Jim, Mclusky were an absolutely great band. This is a fact, a simple impenetrable fact. Go and Google it.

Plug any of their three studio albums into your stupid face and you’ll be amazed (you fucking will!) by the sheer amount of creativity, venom, tenderness and just plain brilliance splattered across each and every song.

I used the word ‘were’ earlier (you may have noticed) as the band split up in 2005, clouded by a grim fog of rumoured in-band animosity and the crushing reality that they were not as world-conqueringly successful as they deserved to be (the truth is, apparently, far less sensational). Sadly it seemed Mclusky weren’t as loved by us record-buying bastards then, as they appear to be now.

Though I blame you, you pricks.

My love is bigger than your love

Nowadays their abrasive, bass-heavy brand of noise has grown in reputation and stature. After the split Andrew (Falco) Falkous (guitars and vocals), Jack Egglestone (drums) and Jon Chapple (bass and vocals) went on to form other bands of various success.

Falco and Egglestone formed the four-headed rock beast that is the awesome Future Of The Left and Chapple eloped to Australia and formed the scrappy punk outfit, Shooting At Unarmed Men. But still the shadow of Mclusky lingered and grew. Like mould in a pub toilet.

Speaking of toilets, you may have read recently that good old London town is in the middle of a small venue cull. Many reliable indie clubs are being closed down amid various problems and (devastatingly laughable) reasons.

Heartbreakingly, North London’s popular rock dungeon The Buffalo Bar is one of them. The old sweatbox of a place where I’ve spent many a night smashed off my face on ‘adult pop’, listening to bands and dancing like a demented Stig of the Dump. It appears some people wont be happy until the only venues left are sponsored by McDonalds and the few bands who can get on the fucking stage are U2 and Sting.

Your Heart’s Gone the Colour Of Coca-Cola

The Buffalo Bar is a place where I’ve seen the likes of Future Of The Left, Selfish Cunt and Kong. At a time of dwindling gig spaces and rampant homogenisation it was an excellent fallback of quality rock-grime. Now like Mclusky it will cease to be.

Everywhere I look is a darkness

But there’s still time for one last hurrah, right? One last ‘fuck you Bono’?

In order to raise a bit of cash for the soon to be jobless staff of The Buffalo Bar, Falco and Egglestone decided to perform a one-off London ‘Mclusky’ show, with the sizeable aide of FOTL bassist Julia Ruzicka and Damien Sayell, bellower of the St. Pierre Snake Invasion, filling in on second vocals for the absent Chapple.

Tickets sold out in about 20 minutes.

First up for the evening are USA Nails who do a ruddy good job of getting the crowd going. Their blast of filthy post-hardcore noise is a perfect way to start the night. It would be a perfect start to most days to be honest. They’re fucking ace. Made up of members of Kong, Hawk Eyes and Silent Front they warm up the already receptive audience as much as an oven warms up a small moist snail.

Suitably hot, it’s time for Mclusky. The smell of anticipation is in the air; well I think it was that, there were a few over-excited people around.

Like the caustic smart-arse bastards that they are, they open the evening with ‘Fuck This Band’, a song that admonishes an audience for their potential role in the destruction of a band. When first released in 2002 it seemed like an ironic dismissal of a fickle audience, played live now it feels like an honest confession of disappointment and inevitability.

From then on it’s literally one of the dirtiest sets a Mclusky fan could want. ‘De-Think To Survive’ has the packed room surging forward, moshing away like sweaty goats in a junkyard. Personal favorite ‘Without MSG I Am Nothing’ is immense, its cacophonous bass shaking through the bones with an intense force. ‘That Man Will Not Hang’ and ‘Gareth Brown Says’ fill me with something that can only be described as happiness, though I’m not sure.

There is no other disappointment here, there are no other obstacles

The set is offensively good, nearly bringing a tear to my eye with the sheer brilliance of it all. Tonight ‘Mclusky’ are tearing down The Buffalo Bar before it’s even closed. The small audience area is turned into a heaving mesh of sweaty limbs spilling back and forth like a very rude jelly.

Falco’s legendary wit and between-song interaction is in full force. The ‘C word’ (cunt) is used liberally and appropriately, and the steaming audience eat out of the palm of his dexterous hand.

Seriously, it’s a gig that you’d burst your eyeballs to see. I could go on about how good each song was but I don’t have all day (I probably do to be fair but I respect your time too much for that). Have a look at the setlist online and weep. There are many shit stadium-sized bands that would kill for a back catalogue like this.

The night ends on ‘She Will Only Bring You Happiness’ and ‘To Hell With Good Intentions’ and a genuine sense of closure and satisfaction. If I could I’d eat several small suburban houses, barbed wire fences, small replacement fireplaces and all, then use the digested bricky remnants to internally rebuild The Buffalo Bar in my pickled, damaged brain and relive the memory of this night and its bludgeoning brilliance forever. (Disclaimer, I will not do this it’s a metaphor, O.K.)

They may have split up in 2005 but here in 2014, Mclusky’s ghosts have just performed one of the best gigs of the year. 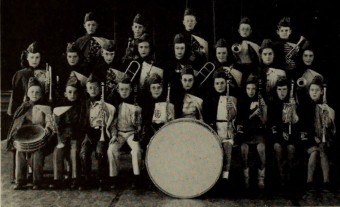 At the current rate of venue closures this round-up will be much shorter next year, but for now relax and revisit what we reckon were the best gigs of 2014...
Read More