When people ask me where I’m from, I say ‘The Wirral’. When they then ask ‘Where’s that?’ I proudly say ‘It is the home of Half Man Half Biscuit, John Peel and The Coral’. When they look on blankly, I venture ‘Paul O’Grady?’, before finally wrapping up with ‘Fake Scouseland’. But I always start with the Coral at least.

Essentially, I’d be lying if I said I didn’t approach this album with home team bias. I was very excited to learn my fave psychedelic woollybacks were unveiling 12 songs from way back in the day, aka 2006. It’s oddly calming to listen to an unearthed record. Gone is the stress of analysing new-new material; of deciding if Skelly(s) & co have taken enough of a new direction, whether they’ve sufficiently innovated whilst retaining the best of what came before. We can take comfort in the knowledge that the sound of this album will most likely fall snugly between The Invisible Invasion and Roots & Echoes, and be done with that whole cumbersome conversation. The only question left to ask is ‘Was it worth their while digging it up?’

My gut answer would be ‘Yeah, I reckon so’. The shadowy production of The Curse of Love fits perfectly with its mysterious emergence from the past. It is a cocoon of wistful melodies, fairytales of forests and seafaring types. Basically what The Coral do best. Forcing myself away from all patriotic pride, maybe a few tracks could have been culled; ‘The Watcher in the Distance’ and the droll waltz of the title track don’t really do enough to distinguish themselves from what we already know*.This culling would have meant that the genuine gems of this buried treasure got the chance to gleam uninterrupted. The swirling guitar and poignant storytelling of ‘View from the mirror’ is not to be missed – a Brothers Grimm counterpart to the dead old lady of Half Man Half Biscuit’s less reverent A country practice. The faraway call and response ‘The Second Self’, and again in ‘Nine Times The Colour Red’ is both quiet and urgent, gesturing towards another time and place, one of adventure and not of Thameslink or pulled pork pop-ups.

I can’t be certain how much my perception of a bittersweet longing on this album comes from my own longing to be back hanging out on the Wirral. To walk along the sandstone cliffs which inspired The Coral’s enchanting brand of neo-psychedelia , to be called ‘love’ by bus drivers and hear at least five ‘k’s in the word chickkkkken. But if you have to go and listen to The Curse of Love for yourself to find out, then my work here is done.

*although the ‘Curse of Love’ reprise at the end has something incongruously ‘Take 5’ about it, which was novel. 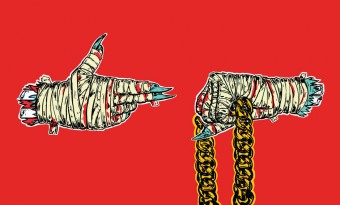 Following the unexpected success of their first album, Killer Mike and El-P return for another round as Run The Jewels - but is it just more of the same?
Read More