While David Cameron manages to turn England’s oldest folk dance tradition into some sort of warped, UKIP voter bait, we’re leapfrogging through October like nobody’s business. Not only have we now got our very own, personalised Gig Guide Calendar all set up (you can view it HERE, while we get our website elves to get it embedded and all that jazz), but we have another Swizzle Knicks mix for you… you (not so) lucky things. This month, Swizzle and Knicks gave up on the commentary and decided to hand over writing duties to Monitors contributor Emma Hall, who’s reviewed it below. We think this has created some sort of music blog black hole, but we can’t be sure as we have disappeared through it.

In the meantime, also get October 25 in your diary, as it’s when The Monitors DJs will be returning to The Star of Bethnal Green for Camel Milk and another night of musical goodness. And if you’re needing some ideas for the Halloween weekend, definitely give our good friends Racket 808’s launch event at the Old Blue Last on November 1 a gander, it features some pretty tasty live morsels too.

Swizzle Knicks 1014 by Swizzleknicks on Mixcloud

How do you go about concocting the much anticipated Swizzle Knicks Mix the fourth? A rare glimpse into the Burman-Swift beat syndicate last Friday night produced the following answers: some haphazard DJ software, a healthy dose (/overdose?) of spontaneity, and not fewer than six Budweisers. The smaller, more bearded half of the duo describes his vision for the project as “somewhere to slang some dope beats. It’s nothing too serious, but provides an insight into some of my influences. It’s something that’s fun, me and Nick drink beers and play tunes. What’s not to like? It’s also a good way of showing what we’re about for potential DJ sets in the future.” The taller, blonder half muses over his hopes for the collaboration: “Doing something. Getting out the house” – coincidentally the same techniques he had employed to combat a headcold earlier that day.

In the course of the mixtape’s production, the closing seconds of each track brought with them a renewed hope that, by some bizarre twist of fate, the Virtual DJ would this time work his magic and the next song would emerge gloriously, seamlessly, out of an unspecified orifice of the former. In reality, the transitions provoked any of three reactions in me, the increasingly merry listener. Some made me giggle (‘Can You Pay My Bills (Siobhan Bell Edit)’>’You-Turn’). Some made me profoundly unhappy (‘Next to it ‘>’Can’t help it’). Some of them were sort of alright (‘Nobody But U’>’Off The Corner (feat. Rick Ross)’).

At times I didn’t give Swizzle Knicks enough of the benefit. Some might say I was too ready to cast judgement on the weirdly decelerated vocals at the end of ‘Multiply (feat. Juicy J)’… turns out this was entirely A$AP Rocky’s doing. My bad. On the flipside – half way through ‘You-turn’ (Fantastic Mr Fox x Kid A) I was on the brink of declaring the hands down best bit of mixing of the night… it transpires it was just a change of pace in the same song. Hmm.

If it’s super sleek mixology you’re after, go sit and look pleased with yourself whilst listening to some Alle Farben or Late Night Tales. Think of Swizzle Knicks 1014 rather as a gapless assembly of songs you most definitely need to hear.

There are nods to the big musical moments of the fast fading summer with some Aphex and Lupe Fiasco. Nods to the fast fading summer itself with a Swim Mountain track so tropical I felt the need to whack on my grass skirt and dance the hula down a sodden Tooting Broadway. Nods to our fast fading youth with some priceless Destiny’s Child. All washed down with first-rate hip-hop, and polished off with the downright nasty ‘Red Sex (Edit B)’ by Vessel, an industrial change of direction at the mix close which leaves you wanting more. 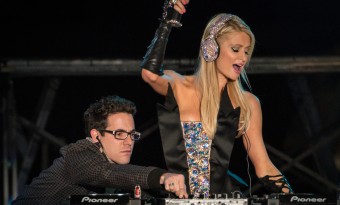