Chances are that you’re a creative person in some capacity; you paint, you write scripts, you’re an author, you play an instrument, you write lyrics, you produce music, etc., etc., etc. So, picture the scene. You’ve got your favourite drink in your favourite mug (don’t judge me) and there’s a blank canvas right in front of your eyes. The thing is though, despite the pre-creative ritual, nothing’s coming out. You might shrug your shoulders and try again, but all of a sudden there’s this invisible monster sat next to you tapping you on the shoulder chanting, “you’ve got nothing, you’ve got nothing…”. So as someone who regularly goes through dry patches of creativity, what do you do? This is my how-to guide on how to break the cycle of doom…

When was the last time you went on holiday? Turned off your phone, unplugged yourself from the internet, stuck two fingers up at the world and just did what YOU wanted to do for a change? Turning up at an airport and getting on the next available flight to literally anywhere is what I’d love to do right now. A holiday to a faraway land where no one is on your back, where there are no emails or tweets to reply to, where there’s no Facebook gossip to catch up on, etc., is a pretty tempting prospect, even if only for four or five days. So if you’re reading this and wondering where your holiday case is, it’s time to book that taxi to the airport!

If my first suggestion is a little out of the question (and you haven’t won the lottery recently) then I have some more Happy Hour-esque solutions. On the face of it, this might not be THE most sensible advice. However, have you ever been to the cinema, watched a film (obviously) and when it finishes, you walk down the steps and back out into the harsh reality of life momentarily thinking you could be just like the lead character in the film? Tough and immune from danger (all the things I’m most certainly not). Films, like books, can evoke so many creative thoughts that your mind is (albeit temporarily) engrossed in a totally different world. I would at this point shout “Orange Wednesdays baby!!!” but errrm, asking for a ticket for one doesn’t exactly do me any favours. PLEASE LOVE MEEEEE! *dabs the tears*

Wait wait wait. Ok. I feel like I need to explain myself. If you’re not a book worm or a film buff, this could be perfect. Now, I don’t understand golf. I don’t understand the what the different clubs are for, I don’t understand the terminology, I dont know if golf gloves give you some kind of special superpower, I don’t even understand golfing attire. All I know is that a driving range complete with a wide open space with targets to aim for, a club, and a bucket of balls (make of that what you will) is definitely worth trying. It’s quite clear that my brain, eyes, hands and legs have all been borrowed from different people because I’m clearly not built for this.

Close the notepad, put the pen down, shut down your computer, put the instrument back in its case and sleep. Power down. The moment you wake up, start creating. Even if it’s just random words or notes. This is your brain trying to play a game of Pictionary but having absolutely no idea what the word actually is. When you revisit this brainstorming session sometime later, you will probably wonder where in your home you keep your secret stash of LSD because it won’t make any sense, but it just takes one of these ideas to click and you’re off and running.

It might seem obvious but actually a lot of people forget this. Revisit some of your previous best work. What were the creative processes you went through to get it like that? Some people can write a sixteen bar verse in ten minutes whereas I can take weeks writing, recording, re-writing, re-recording, trying new things, so remember: each to their own. Don’t stress.

First and foremost, Craig David knows what’s up. The age-old advice of creating when you feel creative is when many people put together their best work. I’ve spent many a studio session trying to force creativity like you’re sat on the toilet trying to force out the biggest number two OF YOUR ENTIRE LIFE and nothing is happening. Relax. If I have an instrumental and I have no idea what to write, I do housework, because I’m cool. OK, not because I’m cool, but again it’s that distraction (as with films/books etc). Washing up or hoovering are my specialities. When I’m going through a creative block my place is SPOTLESS, I tell thee!

Creative people generally know other creative people. Organise a jam session or embark on a collaborative project. There’s just something about being around other creative minds. Two, three, four, five, even six heads are better than one. One idea leads to another idea, and everything starts coming together.

Some people are lucky enough to have a time of day when they feel their brain is at its most active. I’m a night-time person so everything (pretty much) happens when the rest of the world is asleep, and if that works for you, awesome, but Tom Robinson of BBC 6 Music gave me some great advice. He said you might write one hundred bad songs before you write the gem on your one hundred and first attempt. The concept of forcing yourself to create gets all of the rubbish ideas out of your system until you find something which really works. Don’t be scared to create things which aren’t good, just make sure you only show the world your best work.

So, if all else fails, the answer to my opening question, “what do you do?”, is actually simple. The solution is LIFE (no, I’m not high, drunk or a born again hippy). Stuff we go through makes us feel so many different emotions, even on a daily basis; love, hate, make-ups, break-ups, arguments, overhearing conversations, etc. Live your life and embrace everything that gets thrown at you. It takes just one thing for the creative engines to fire up again, so hang in there! 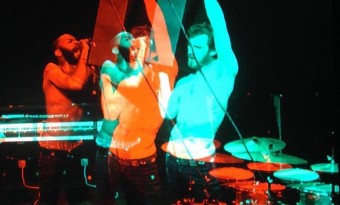 Abrasive, explicit, seedy and unpredictable, no one seems to quite believe, or want to believe, that Death Grips are finished. Ted Ralph leads the tributes with a retrospective of their chaotic career...
Read More