The most regrettable misconception about horror/thriller film-music is that it ought to be frightening. Tense or unnerving it may be, but if you’re aiming for shock value, the best you will come up with are tired orchestral hits, the musical equivalent of a Scoobidoo monster leaping out of the wardrobe shouting boo. Which is why when it comes to the true horror, that of reality, the greatest weapon in a filmmaker’s arsenal is the often-underused power of silence.

And so we may easily imagine Jonathan Glazer’s pitch to Mica Levi, who some of you will know as Micachu and the Shapes, as follows: Under The Skin is a film built on subverting, bending and blending the codes of science fiction, horror and thriller; and so should the music. Levi’s answer, without straying too far from her recent work with the London Sinfonietta, is to focus less music than sound-design, and indeed, what you hear throughout the film can hardly be described as a soundtrack as much as a noise-track.

This process works to superb effect during the film’s opening scenes. Built on fragments of speech (an alien deconstructing our language?), the first sequence skilfully sets the tone for what is yet to follow, treading lightly upon the fine line between high art and highly arty, but definitely creepy as hell. Most of the tension in the film is in fact built with little else than minimalist echoe-y noises, the inevitable detuned staccato violins, albeit scraping notes rather than playing them, the sound of an airplane passing overhead, a muted snare, or the muffled noises of city life heard through the closed doors of a white van.

Which isn’t to say that there isn’t any music at all. The main and only leitmotiv, a Hitchockian femme fatale melody of glissando strings is manipulated and tortured throughout the length of the film to create an unsettling feeling of familiar unfamiliarity. In that respect the music mirrors the game of contrasts at play in the film’s themes. The cold, glacial gaze of the perfect hunter alien on Glasgow (and modern humanity at large) turns us into foreign creatures: ugly, raw, un-stylized, uncivilized Celtic football fans and hen-party floozies.

There is another striking display of composition when, at the turning point when the hunter becomes hunted and begins thawing to our human flaws, a majestic theme simply entitled Love appears. This Love however, is an unsettling, cold, pitch-shifting digital synthesized love, reminiscent of an early John Carpenter soundtrack or an M83 song, (which, it should be said are often interchangeable).

The only criticism of the soundtrack for Under The Skin is the following: while the director’s vision proves admirably bold in terms of theme, tone and cinematography, the music might appear by contrast a tiny bit…obvious. There is a very subtle imbalance in the fact that the film offers few points of reference (except perhaps in the visionary genius of Kubrick or Tarkovsky?) but that the music appears clear enough in its inspirations and aspirations. When heard independently, there is little doubt that Levi’s work is indeed designed to accompany a weird and disturbing film. Glazer’s latest masterpiece, in its unique vision -which, like all truly unique experiences cannot be anything but divisive, is so much more than that.

Pop will eat itself, and U2 are the orifice it's going through... 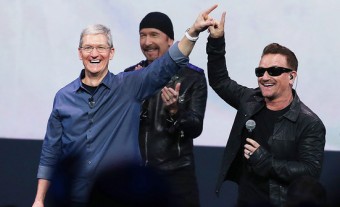 U2 may be bathing in champagne tonight after their stunt with Apple, but are they ruining things for more than just people who have their iTunes on shuffle?
Read More