The idea of a concept album about a remote island that’s capable of space flight, which comes complete with an accompanying map and detailed track-by-track story, seems like something even pretentious proggers like Yes might have thought was a bit much. That it actually forms the basis of one of the freshest, most forward-thinking albums of the year so far is one of the many pleasant surprises dished up by Tayi Bebba (the name of both the album and the fictitious island), the debut album by Clap! Clap!, aka Italian producer Cristiano Crisci. If you’ve been waiting for an album that fuses African field recordings and traditional percussion with trap, techno and footwork beats… OK, chances are you probably haven’t, but you should be damn glad it’s here.

Initially I had some doubts about the premise. A ridiculous narrative theme I can deal with (or just ignore) but there can be something a little awkward about white European musicians mining African folk music. Artists like Cut Hands (whose music sounds, to some extent, like a much more brutal version of Clap! Clap!’s) have attracted accusations of cultural colonialism from some quarters, and there isn’t a track on Tayi Bebba that doesn’t incorporate percussive or vocal samples from Africa. However, while William ‘Cut Hands’ Bennett’s work has frequently fed off the exploitation of taboos, Crisci’s approach, even if his imaginary island is still rooted in ideas of African Otherness, feels much more celebratory.

Whether that makes it more acceptable depends on your politicultural perspective, but Crisci’s deep love for African music becomes palpably evident through the album’s exuberance and attention to detail. If this was some cheap shotgun marriage between Sub-Saharan rhythms and Western beats it would come off, at best, tacky and distasteful. As it is, Tayi Bebba is so damn good that it’s hard to concentrate on any potential misgivings. Every time I’ve played Clap! Clap! in public, whether DJing or to colleagues at work, someone has come up to me within seconds to ask me who it was. Seriously: Every. Single. Time.

Ironically, opening track ‘The Holy Cave’ is one of the least immediate, easing itself in with a little trepidation and some hushed vocal samples, but you can tell it’s building. And sure enough, the kick drum kicks in, the electronic crickets start buzzing, and by the end of the track you’re in another world.

It’s ‘Ashiko’ that really lets you know you’ve arrived though. Starting off like the theme tune to some African gameshow, the beats then power up, an elephant start trumpeting (honestly) and THAT BASS drops. The track’s title refers to a giant elephant that defends Tayi Bebba island from invaders, but you could blast this at any army and chances are the rhythms alone would rend them incapable of aiming their weaponry.

There’s more of a Latin flavour to the guitar phrases at the beginning of lead single ‘The Rainstick Fable’ (which reappear later in the track), but a sudden flush of kalimba and a flurry of rimshots soon put us back on the island. ‘Conqueror (action / assault / conquest)’ takes it up another notch – rhythmically it’s like receiving a thousand slaps to the face. This is, according to the album’s story, a song of war, and while flute isn’t exactly the instrument you’d choose to lead you into battle, the way it squalls and flaps above the drums evokes the panicked intensity of chaotic violence.

It’s the first of a mid-album triptych of conflict, the second of which, ‘Conqueror (consequences / memories)’, represents the aftermath. Initially a detritus of disorientated field recordings, it suddenly develops into a fractured trap track that, despite its form and symbolism, is actually pretty blissful. Unfortunately ‘Conqueror (remorse / withdrawn)’ is probably the weakest track on the album, mainly thanks to the recurring use of a rigid 4/4 kick that jars against the tribal rhythms (which isn’t to say that particular cross-rhythm can’t work, it just doesn’t here). On an album where the rhythms are executed so flawlessly and with such attention to detail and texture, it sticks out as a weak moment when on most albums it would probably be more successfully distinctive.

‘Burbuka’ soon gets things back on track, pivoting around a particularly strong vocal hook to create an African equivalent to something off El Guincho’s Alegranza album. Apparently this is a track about smoking a herbal blend indigenous to the island, but you don’t necessarily need to do likewise to enjoy its potency. Nor that of ‘Sahkii (Xirhuu)’ and its gloriously teasing, ever-rising pitched percussion that never quite resolves, leaving you constantly itching for a pay-off kept tantalisingly out of reach.

With its rounded boulder bass, cherry-picked vocal samples and ever-mutating rhythms, ‘Sahkii’s Elevation’ is probably the track that most clearly distils the essence of the album as a whole, while Black Acre labelmate DJ Khalab offers assistance. A dub bassline then adds yet another flavour to Tayi Bebba‘s rich stew, although the shattered beats of ‘Universal Modulator (kujhmak)’ might be a little spiky for some to digest, especially when combined with its mercurial tempos. Apparently there’s an earthquake going on at this point, so I guess we’ll blame that.

To be honest, I pretty much lost track of the narrative the one time I tried to listen to it while reading the liner notes, but it all gets a little astral around here, and the spacey, drawn out synths of ‘Sahkii’s Knowledge’ certainly fit that context. The bubbling and infectious ‘Universal Modulator (ujmubuam)’ and ‘Sealing in the Seas of Wood’ follow, although if this is the soundtrack to the island taking off and blasting into space (which it is) then it’s a far smoother flight than any I’ve been on recently.

‘Kuj Yato’ rounds off a spectacular journey, and it seems that Crisci has saved the best till last – the drop on this is, quite simply, sexy as fuck. As we’re “slowly crossing the energetic fiber rings,” to quote the notes, “the Tayiians are taken by a great sense of happiness”. Well, I certainly was. What a blast.

Unfortunately it also means a return to reality. For fifty-odd minutes Tayi Bebba takes you on a trip to an imaginary island just off the African coast, but also to some figment of Crisci’s imagination. It’s like being bitten by a snake and the venom causing febrile visions, except there’s more dancing involved and when the venom wears off you give the snake a good kicking in the hope it’ll bite you again. Tayi Bebba may well constitute cultural thievery, but it also constitutes a fucking brilliant album. 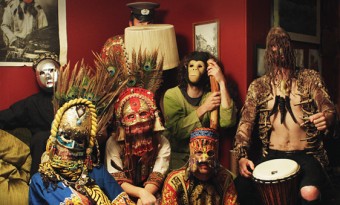 As happy travelling the astral plane as they are circumnavigating the globe in search of ancient sounds to plunder, Goat invite us into their 'Commune'...
Read More