I’ve seen a few comeback gigs: The Specials (albeit sans Jerry Dammers), Eric Burdon and War, The Zombies, Brian Wilson, Television and Arthur Lee & Love to name but a few. It’s fair to say the results have been mixed. Some have been triumphant like Morrissey’s return to Manchester in 2004, some have frankly been heartbreaking; Arthur Lee was note perfect singing his Love classics but fell apart pitifully when attempting to add new songs to his repertoire. It was as if the weight of his early genius had crushed any hope of ever moving on. As he fluffed his lines, the look on his face suggested that he knew it, which was perhaps the saddest thing I’ve ever seen on a stage.

Sometimes the comeback trail only serves to remind you that in the midst of nostalgia you can’t actually go back, or indeed move forward. The stakes then, were ludicrously high for Kate Bush but even in this esteemed company I really can’t find a decent comparison.

Despite the opportunity to play any stadium in the world, Kate elected to ditch the notion of touring and instead took up a residency at the rather more intimate surroundings of the Hammersmith Apollo. For many fans this London-centric approach felt like a snub of sorts but the truth is there’s no way a show like this could tour in the traditional way. The cast featured well over a dozen musicians, dancers and puppeteers. The West End-style theatrics saw stage sets that would make Spinal Tap balk at the scale of her ambition.

Helicopters flew overhead in surround sound, the North Sea was viscerally recreated on stage and the climactic end to the hypnotizing second half drew us Icarus-like into ‘A Sky of Honey’. By the end of ‘Aerial’ (having already delivered the moon on a stick) the production team began literally tearing up trees before sending them crashing into the midst of the band. No really, it was nothing short of spectacular.

By now of course you probably know all this. You have probably heard that she dared not perform any of the seismic hits garnered from her first three LPs (let’s be honest, there aren’t many artists who could come back after 35 years and get away with side-stepping their best known work in favour of two hours of dramatic, but awkwardly surreal B-sides and get away with it). Every music hack and blogger with a restricted view has already spilled those beans so there’s little point in recanting the gushing praise for the work itself – so what is there left to talk about?

Well, what struck me was the atmosphere; the live experience is really about people. It’s about sharing a moment with strangers and feeling the relief of knowing you are not alone, that others see the beauty in what you see, and in that instant humanity is laid bare.

In my experience only Brian Wilson came close to matching the love on display here. Unlike Kate Bush however, Wilson cut a forlorn figure on stage. He was greeted with heartfelt sympathy and warmth by his legion followers, all of whom were well aware of the long hard psychological road he had walked to reach the point of return. His immense talent shared the stage equally with his evident confusion and fear of rejection. Propped up by his band, he still brought us the joy of his creation but we also left feeling sorry for ‘a broken man too tough to cry’.

In contrast, age may have brought Kate’s voice down a tone or two but she had lost none of her power. Adroit, confident and charismatic, she waltzed on stage with grace and aplomb. The palpable sense of love that greeted her was nothing short of joyous. The question that occurred to me is what made this emotional outpouring possible?

This was far from a greatest hits collection and contrary to what you might have been led to believe, neither was it a jolly West End musical. There was nothing easy about this show. A smattering of Top 40 singles was lost in a sea of experimental songs about death, loss and succumbing to happiness. The crowd was reverend to the point of submission and yet so charged by the event that I lost count of the number of standing ovations. What was it about Kate Bush that allowed this devotional trust to build in the hearts of many attendees who had plainly stopped participating in music some time ago? They weren’t day-tripping – they evidently had an unsullied attraction to this woman’s work and many wept openly at the waves of emotion rendered by her performance.

On reflection I think Kate Bush is the free spirit many of us want to be. A perfectionist with a deft human touch, a strong woman uncowed by external pressures to be something more saleable or easier to understand. She ploughs her own path, fiercely protective of her art and savvy enough to keep control of it. She is also divisive, you either get it or you don’t. This was her show on her terms.

Contrary to the myth promoted by the media that Kate Bush is some sort of mad Gelfling living in a pixie world singing ‘WOW’ on repeat, her actual stage presence was earthy and real. She has a sailor’s mouth and the crowd revelled in her description of her ‘fucking shit-hot’ band. She remains humble enough to encourage the audience to sing one of the cast members ‘Happy Birthday’ in the finale of her show. Not many superstars of old would be anywhere near that generous and giving to their minions. People recognised that generosity and responded in the manner it deserves.

The audience was as one, delighted to welcome back an old friend, energised by a sense of belonging and happy to be taken wherever Kate Bush wanted to go, with no questions asked. Perhaps the most telling part of the evening was right at the end when she stripped everything back, did away with props and sang unaccompanied on the piano – there she channelled pure emotion to a sell-out crowd with consummate ease. Hammersmith Apollo was bristling with love that night and I don’t think anyone attending will ever forget it.

Just one thing Kate, don’t leave it so long next time.

A weekend of Raw Power, reviewed... 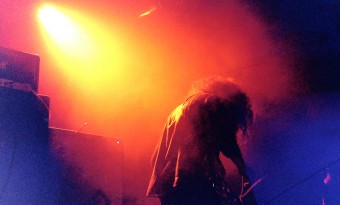 Noise. Chaos. Rhythm. Stairs. Baba Yaga's Raw Power weekender didn't disappoint on any front, and we were there for every single band. And no, we haven't bloody recovered yet...
Read More