On the other side of town, all the proper music journalists are waiting to watch a 60-foot animatronic Hound of Love running up a hologrammatic hill, as Kate Bush celebrates her first gig in 35 years with a spectacular stage show (don’t worry spoilerphobes, I made those elements up. I think). After having eschewed (i.e. not been offered) tickets for the opening night of Bushmania 2014, the contrast with the set-up at the Union Chapel is conspicuous: the only things in front of the pulpit are three guitars, a banjo and an upright piano, and only one man is going to play any of them.

The fact that man is Daniel Rossen perhaps explains why a couple of fans stand in front of the empty stage before the show, taking photos of said instruments. For while Rossen will never reach Bush’s level of fame, his records, both with Grizzly Bear and Department of Eagles as well as under his own name, still inspire cult levels of devotion among his fans. Indeed, the show has been sold out for weeks.

Pleasingly, a large proportion of ticket-holders turn up early enough to catch Norwegian folkstress Farao’s support set. Funnily enough, the first time I saw her was also in a church (St Bartholomew’s in Brighton to be precise). Suffice to say the way her music filled the cavernous building that night was something to behold. That she manages to do the same here is even more impressive, considering she is without her usual band, accompanied instead only by a keyboardist (who also provides graceful vocal harmonies).

This doesn’t affect the lustrous quality of her songs for the most part; the swell of ‘Forests’ feels like a sad flower blooming, while the equally melancholic ‘Tell A Lie’ undulates as delicately as on her debut EP. Her sombre yet sonorous finger-picked guitar suits the surroundings perfectly, and the audience’s rapt attention doesn’t go unnoticed – “You’re such a lovely audience to play to,” she gushes. “So quiet!”

She closes her set with ‘Skin’ which, without its usual percussive thud, morphs into a Jeff Buckley-esque number, although with a touch less melodrama. If there’s a criticism, it’s that the stripped-back set-up perhaps makes some of the songs sound a little too similar. Hopefully next time the promoters book Farao here, and they surely will, they’ll make space for the rest of the band…

While you may be able to fault the venue’s ‘no booze in the chapel’ policy (even if it is pleasingly twee to see people returning their tea mugs to the kitchen after the show), you cannot fault much else at Union Chapel. Certainly not the sound, which is as good up in the gods for Farao as it is three rows from the front, where I relocate to for Mr. Rossen.

(Incidentally, it’s amazing how a few photocopied A4 sheets with ‘RESERVED’ written on them can deter everyone from taking some of the best seats in the house. I might start taking my own signs to venues just as the doors open so I can leave them at the front, then bugger off to the pub until I want to return to my prime spot)

Anyway, I’m close enough to see the sweat on Daniel Rossen’s brow as he takes to the stage, bathed in violet light. For a man who played the far larger Brixton Academy last time he was in London with Grizzly Bear, he sure does look nervous. Then again, a solo gig in such hushed surroundings is a very different proposition, and the slightly twangy piano doesn’t help his opening number create quite the desired atmosphere. Luckily it doesn’t take long to arrive.

“This is the first show I’ve played in six months,” Rossen reveals, “apart from to some trees in my backyard,” before breaking into perhaps his strongest solo composition, ‘Silent Song’. If there’s a problem with seeing Rossen playing a solo show it’s that his talent for nuanced instrumental arrangements is negated, but his sparkling 12-string guitar-playing here is so sumptuous that it matters little.

His archtop guitar isn’t quite so beguiling, distorting unpleasantly during the louder moments of ‘In Ear Park’ (which opens the Department of Eagles album of the same name), but his stunningly fluid finger-picking means it fairly cascades into the chapel regardless, before another album opener, ‘Easier’ (from Grizzly Bear’s Yellow House) follows. Personally I far prefer DoE to GB, but the audible clenched fist “yes!” it elicits from the bloke behind me suggests that not everyone agrees.

A dustily delicious cover of Townes Van Zandt’s ‘Kathleen’ is next, before Rossen returns to the piano for ‘Herring Bone’, also from In Ear Park. It’s not one of the night’s best, but it nonetheless segues perfectly into ‘Saint Nothing’, which is so cold and lonely that for a second it almost feels like the chapel could be empty but for him.

While ‘Golden Mile’ misses its lead guitar and backing vocals a little, and ‘Not Coming Back’ suffers from that archtop distortion again, a rarity called ‘You Move Too Fast’ draws a massive “woop!” from a fellow at the back: “That guy is stoked,” Rossen observes, before drily commenting, “yes, it’s the best”. He then reveals that it’s actually the first track he ever played in front of anyone, and there does seem to be some foreshadowing of ‘Silent Song’ in certain snatches of melody.

The banjo finally gets to come out and play for set closer ‘Balmy Night’, and its gorgeously mournful essence draws an end to proceedings as effectively here as it does to In Ear Park. There’s no chance this audience is leaving without an encore though, and after a few minutes of rumbling pew-thumping throughout the venue (probably the most aggressive sound we hear all night), Rossen returns to play a farewell cover of Judee Sill’s ‘Waterfall’. To be honest, it’s the only song tonight that could legitimately be described as a little dull, but the religious undertones of the song seem fitting considering our surroundings.

Incredible though I’m sure Kate Bush’s new show is, there’s something charmingly bashful, not to mention frequently beautiful, about Daniel Rossen’s performance tonight. There’s no need for helicopters, backing dancers or confetti cannons – Rossen’s songs are strong enough on their own to keep his flock flooding back to the altar. 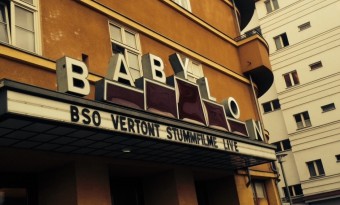