I expected to hate this album, for both totally logical and completely extraneous reasons.

We’ll start with the latter: the word ravioli makes me feel sick. It has done since I was at infant school, where ravioli was frequently the centrepiece of the free school dinners on offer. These ‘meals’ tended to resemble what that weird kid from Year Three used to regularly deposit on the classroom carpet during playtime, although impressively they actually tasted even worse than they looked. Once I was overjoyed to discover that they were offering strawberry jam sandwiches, only to bite into one and discover they actually contained bright red and yet utterly tasteless slices of ham. I didn’t, and still don’t, eat meat. That sandwich is probably the main reason I’ve never felt like I’ve missed out as a vegetarian.

Surpassing both this, the sweating flan and the queasily viscous semolina, however, was the ravioli. Sad little squares of despair containing what appeared to be the pulped remains of the few remaining books in the library, covered in a slowly congealing ‘tomato sauce’ that may as well have been the still-warm blood of our parents, such was its appeal. Thus, simply having the word ‘ravioli’ in their name kind of put me off Ravioli Me Away. That and the fact it’s a fucking terrible name.

The other reason for not expecting much from their Inevitable Album makes a lot more sense: I didn’t much like the lead single, ‘Cat Call’. It had plenty of elements that would normally appeal – musical echoes of post-punk favourites, a defiant DIY attitude, and a strident yet shambling sense of purpose like a drunk railing against the world’s ills while dribbling vomit onto their cardigan. Yet it just didn’t do anything for me.

Yet within seconds of The Inevitable Album‘s opening track ‘Good Team Player’ I realised I’d made a misjudgement. The repeated refrain “I’m a good team player / I’m a quick, quick learner” didn’t just show that the band had clearly excelled at whatever back-to-work scheme they’d just completed, but was stupidly catchy too. “Are you able to work under pressure?” they asked themselves, and judging by their willingness to chuck in a sudden time change, the answer was yes.

Similar delights are to be found throughout The Inevitable Album (which is something I could never say about school ravioli). There’s the berserk smoosh of ‘Hit By Love’, the pulsing keys of ‘Euro Breakdown’, and the David Cameron-sampling agoraphobic nightmare of ‘Imagination’. Then there’s ‘What’s It About’, which ties its keyboard up like a dog to a lamppost while the tremendous bassline leaps about like it’s been let off the leash. “What’s it about?” they scream. Who knows. Does it matter?

There’s similar uncertainty in ‘Estrogen’, which begins with the line, “I wanna be a feminist but I don’t know what it means / There’s a man who looks just like me and I see him in my dreams.” Awesome rapid-fire call-and-response vocals combine with an eerie keyboard ostinato and rumbling rhythms, causing the whole thing to cascade into your ears like rocks rolling down a Turkish mountain, before literally ending in a bout of hysterics.

Indeed, the whole album seems like it’s permanently on the verge of collapse, an effect enhanced by the extremely lo-fi production – listen to a random section of any song and you could be mistaken for thinking you’re listening to a rehearsal recorded onto somebody’s phone. Yet, with space, many of the tracks reveal magic underneath the rough exterior. Not least ‘Romance Amnesia’, which combines an Ari Up-style chorus with spoken-word verses that exude a mundane sexuality Jarvis Cocker would be proud of: “Do you remember Faithless at Creamfields in ’98? / You tore off my tights with your teeth in your Volvo Estate”.

The album ends with ‘Scooby Loop’, which is exactly what it sounds like – a cartoon creep-out forever and ever. There are shades throughout, too, of that other East London post-punk outfit Shopping too – the sloganeering lyrics, the jerky rhythms, the joyously ramshackle style, the link to Haggerston gig cauldron Power Lunches (RMA’s Sian Dorrer is the venue’s founder). However, while Shopping tend to select most of their quality produce from the same musical shelf, Ravioli Me Away are careering around the supermarket in a soon-to-be-overturned trolley, grabbing random items as they go.

It means The Inevitable Album can be erratic, sorrowful, dangerous, cheap, brutal and peculiar, all at once. A bit like that ravioli they used to serve at school in fact. Except this time I’ll be going back for seconds…

Ravioli Me Away play a The Inevitable Album launch party at, inevitably, Power Lunches this Saturday. 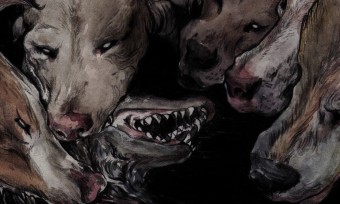 It seems noisy Norwegians Okkultokrati have not only hidden in the heart of horror, but they’ve also rented a caravan, invited all their mates and are having a f*cking smashing time...
Read More