I have a slight problem when writing about UK hip-hop, which stems from my opinion that the best British rappers are equal to their American equivalents. See, this isn’t a popular view, meaning either most people are wrong (often the case, to be fair) or I’m over-rating my countrymen because I find their lyrical content easier to recognise and relate to. While Kanye’s rapping about the sort of lifestyle that only the 1% could possibly relate to while Nicki Minaj blethers on about her own arse, it’s refreshing to hear people rapping about tube lines, chicken shops and getting utterly twatted like only we Brits can.

There have already been some amazing hip-hop releases out of London this year, from Little Simz in the north to Kate Tempest in the south, and now they’re joined by Eleven Ninety in the east (if anyone wants to throw a good West London rapper my way, I’m all ears). His debut EP, Herbal Abuse, doesn’t cover a wide range of topics – weed, the daily grind, train stations in Newham, getting completely wasted just to block out the horror on the television screen – but they’re ones that many Londoners will be able to relate to.

Opening track ‘Can’t Get High’ is the lyrically jaded result of the sort of ‘herbal abuse’ referred to in the EP’s title, and does a decent job of capturing a city where you’re never far away from being enveloped by a thick cloud of skunk smoke. “Can’t get that high anymore / Shit don’t feel like it used to before,” Eleven Ninety intones over jazzy guitar ripples and minimal beats, showing that he can sing as well as rap (although that particular refrain is maybe repeated a little too often by the track’s close).

Still, even if he’s not enjoying the demon weed much any more, the EP retains a nicely stoned glow throughout, not least thanks to Pheeetus’ enjoyably blissed-out production. ‘Good Vibrations’ is full of, well, good vibrations, kicking off with slowed down vocal samples and revolving around a gloriously lazy guitar line that seems like it’s just washed onto a tropical beach. In terms of subject matter, however, we’re emphatically not on our hols, as Eleven Ninety despairs about his 9-5 taking up way more than eight hours of his day.

The impossibility of escaping the rat race is one of the EP’s major themes, especially when contrasted with pursuing more personal goals (or just getting really high). ‘Light Somethin Your Nerve’ begins with a sample of Freddie Mercury being interviewed (“I love my job but I hate talking to people like you”), and again the mellow yet uplifting beat contrasts with EN’s downbeat patter. It’s possibly the best track here, and certainly the most political, as the lyrics focus not just on the trappings of society but the sinister distractions they provide: “What’s yours ain’t mine / What’s mine ain’t yours / That’s what they tell you / So you want more / Now you wear Louis V / While they go and fight wars”.

That’s about as impassioned as Herbal Abuse gets though. The warped jazz of ‘Mama Said’ evokes a dusty Tribe Called Quest feel with a London swing, before the soft horns of ‘Roaches In My Ashtray’ round things off in somnolent style. While it’s early days for Eleven Ninety, you sense that there’s much more to come; his singing ability (which is probably more polished than his rapping at present) means he can already stitch a decent hook to a track, while the tension between his heavy-lidded countenance and the social passion evident in his lyrics is intriguing.

At one point he makes the following request: “When I die tell the reaper put my spirit in the speakers”. Hopefully he’ll be putting plenty more through the speakers while he’s still on the right side of the grave. 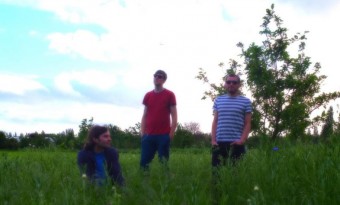 Sick of jumped-up indie bands being described as 'shoegaze' by people who should know better? Let The Enters remind you exactly how it should be done...
Read More