While it’s not like no one had noticed the endemic apathy among British voters before Russell Brand started screaming from his soapbox about it, there’s no doubt that the morality of vote-abstention has been debated much more since his Newsnight encounter with Jeremy Paxman. That issue is especially pertinent in Scotland right now thanks to the forthcoming independence referendum, and perhaps that’s why Dunfermline four-piece Foreignfox have made it the focus of their new video for ‘Quiet At Home’.

Not that they’ve twinned their emotional song-craft to footage of a Alex Salmond and Alistair Darling debate (thank god). Instead, the video follows a bloke whose mundane day-to-day life is suddenly disturbed when he receives a flyer imploring him to ‘VOTE OR DIE!’ However, it seems that this isn’t just an aggressive marketing strategy but a genuine threat.

Soon he finds himself being chased by a gang in political masks (Putin, Maggie, Blair, etc.) wielding baseball bats, while he has nothing to defend himself with other than a scratching post for a cat. As a metaphor for the feeling of impotence common to many people when considering the political classes, it works pretty well. Whether armed vigilantes constitute the best way to combat voter apathy is another question, but you have to admit it’d probably be pretty effective.

As a rabble-rousing call-to-arms, ‘Quiet At Home’ works well too. It has all the qualities that have seen The War On Drugs gain even more popularity over the last year too, with adjectives like ‘soaring’, ‘passionate’ and ‘anthemic’ all easily lending themselves to a song that begins with maudlin folk before powering into pounding indie-rock. Whatever the result of the referendum, Foreignfox will be hoping it convinces plenty of punters to vote ‘Yes’ (with their wallets) and purchase the EP it appears on – We Float Like Sinking Ships – via iTunes… 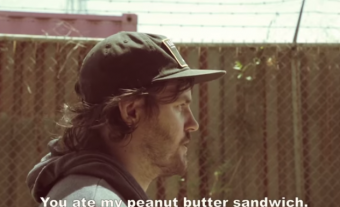 Most high-budget videos are boring. The Yuseddit Brother's low-budget clip for 'Metronome' features shoot-outs and alien invasions. We know which we prefer.
Read More