It was light when you left wasn’t it? Where are you now? It’s dark, deep inside an old crumbling catacomb. The air is heavy with the smell of dank fear, the echoes of pain coat the thick stone walls like stained, acrid tar. Hands outstretched, you blindly feel your way through shadows as the sound of old bones crackle beneath your feet. There’s something shifting in the distance, something vast and malevolent. It means to do you harm… glorious, tasty harm. The bastard.

This is the feeling evoked by ‘Cosmic Wynter’, the 16-minute synth-led instrumental closer on Okkultokrati’s blistering third album ‘Night Jerks’, an album so dirty, so grimy that having experienced it’s eight tracks you’ll need to give yourself a bloody good scrub to rid yourself of its black as pitch-charcoal noise residue. It’s fucking filthy.

Okkultokrati are a Norwegian noise band, blending hardcore punk and metal into ferociously savage attacks of aural abuse. Like fellow Norwegian noise gods and Fysisk Format label-mates’ Årabrot, they seriously don’t mess about; this is heavy and will bludgeon you to death if you turn your back on it. Like the cracking album artwork, this is an album of violent savagery, a desperate and exhilarating ride into murky depths. You may come out of the experience shaken but you’ll feel a fuck-sight better for it.

Singer/guitarist Päl Bredup faced severe muscular problems prior to its creation and consequently replaced his guitar with synths on some songs, leading to a much denser and absorbing trudge through the darkest of Nordic sludge rock. If he physically struggled to make this music it was a struggle well worth going through for the listener; every note feels fuelled with passion and anguish, thrashing out hardcore burnished metal as if fighting for life against an unseen foe. These troubles seem to have fanned his creative flames.

Instrumental first track ‘Intro’ lulls you in with a false sense of security with 17 seconds of ambient synth, before crashing into opening tracks proper: ‘Dazeripper’ with thrash guitars and pounding drums then ‘Night Jerks’, shredding the peace like claws through bone in full on hardcore mode. ‘Zero Kulto’ slows the onslaught down. The sound of deep foreboding; we’re lost in a wasteland surrounded by destruction. ‘Moon Daggers’ is a savage stab to jolt you back to reality, singer Bredup’s guttural roar turning into throat-tearing screams. It builds and builds to a manic swirling conclusion.

The absolutely brilliant ‘Rose Crux’ is a surprising industrial post-punk demon, its hypnotic rhythmic repetition and shamanic vocal mantra drawing you ever closer – lean in right close and feel the fire on your face. It’s fucking evil. And when you’re well under the album’s spell it peels off your face with ‘The Ladder (Punched out)’, knocking you for six and leaving you for dead, covered in shit.

Then comes the cataclysmic horror movie soundscape of ‘Cosmic Wynter’, wrapping proceedings up with its ominous funereal drone. Like all truly good horror films this is a journey well worth taking. By this point you’re trapped, there’s nothing to do now except await the final credits.

Having entered the catacomb willingly, we have indeed been done in by the bastard. My ears are bleeding and my neck aches. The little fucker did mean us harm, but man did I enjoy the mauling – the glorious, tasty mauling. 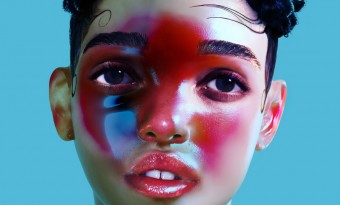 You won't find a more salivated-over artist than FKA twigs﻿ right now, but does she justify the hype on her (imaginatively titled) debut album?
Read More