As you may or may not be aware, sometimes various members of The Monitors’ team pretend to be DJs (much like the majority of people you’ll see messing around behind a pair of decks this weekend). From the listener’s point of view it may be almost impossible to tell – the music’s decent, the tracks segue into each others nicely, perhaps there’ll even be a bit of beat-matching or some nice filtering action. The difference is that a real DJ will have spent all their life honing their craft, all their money building their record collection and all their time on Discogs hunting some rare 12″ so excruciatingly expensive that they’ll never actually be able to bring themselves to put it in their box and take it out of the house.

Meanwhile, us pretend DJs turn up with some cheap second-hand vinyl, a few burned CDs and maybe a laptop with Traktor on it and proceed to take home the same fee the real DJ would’ve pocketed. Heh heh. Still, we’ve always been of the opinion that the most important tool a DJ can have is the ability to select decent music, which is why we continue to inflict ourselves on venues with good taste and no snootiness.

Like the Star of Bethnal Green, which tomorrow will be hosting the second edition of a new (free entry) Monitors-related night: Camel Milk. Teaming up with DJ Dusty Tea of Feed Your Head, Monitors editor Kier (aka DJ Smashed Crab) will be playing a mixture of electric funk and exotic boogie, running the gamut from Anatolian prog to East African jazz and crossing as many borders as possible in between. Have a gander at the event page, then get your arse down there and shake it to stuff like this:

But they’re not the only new Monitors DJ Duo in town – there’s also the sumptuous Swizzle Knicks, aka the formidable combination of Nicholas Burman and Yolo Swaggins. They uploaded their first mix last month, and we’re delighted to host the follow-up below, along with an entertaining run through the tracks they’ve selected. Fun fact to piss the real DJs off even further – these guys don’t even use headphones when they mix! They’re off the flipping hook! Also, you won’t find a better round-up of the latest hip-hop and electronic sounds, so flip the switch below and scroll down so the boys can talk you through the tracks…

Swizzle Knicks 0814 by Swizzleknicks on Mixcloud

One of my favourite cuts from the new album on PAN, and a wonderful opener for the mix as it’s really dreamy and smooth and not a lot happens!

Nick: I think in future we’ll just do a white noise mix.

Yolo: Don’t try and come across as funny in this transcript Nick, it won’t work. Nick is not funny, everyone.

Wicked instrumental from Obey City that was put out as part of the LuckyMe advent calendar, I think Underachievers of Flatbush Zombies eventually got to spit on this… it’s got some sex noises at the end too…

To me this track sounds like a remix of a big pop tune, but it isn’t. The vocals rub me up the right way.

Yolo: This sounds like a Lil Silva tune with Banks featuring on it…

Mmmm, lovely bounce. This is a Numbers tune you’ve just reliably informed me… their stuff seems to be really fun at the moment. Proper tongue in cheek party vibes.

Yolo: Haven’t been feeling any of the Redinho stuff to be honest, have you got any SOPHIE?

A Phil Collins mash up with Bronsolinho rapping over the top – what’s not to like?

Action Bronson & Party Supplies – Through The Eyes Of A G (feat. Ab-Soul)

More amazing sampling from Party Supplies, this time a Nightmares On Wax track (I think?). Nice verse by TDE’s Ab-Soul as well.

Nick: His crowd at Beacons on the weekend reminded me of when I saw Oasis. Just a load of blokes shouting at each other.

Yolo: Whatever this is, it’s putting me on edge as something in it sounds really out of tune…

Nick: Love this album so much. A really nice mix of electronica and gospel in there. They’re supporting Massive Attack in London in September too, need to sort out my ticket for that really…

Nick: Another Numbers one from me, and I’ve got one more left from them before we’re done. I think I should get on the pay roll for this… maybe I could become the Numbers hype man?

Yolo: Got a sneaky feeling we’ve got the gain up way too loud… oh well, TURN UP!

One of my favourites from the Lil Durk’s newest mixtape, he’s Chicago’s hottest property right now, they say he terrifies his city…

Absolute anthem from these two young kids, the video just dropped the other day so check that one out, I don’t know much about them other than I love this tune, they knowww betterrrr!

Yolo: Nick just played a SOPHIE track although he doesn’t like SOPHIE, I did ask for it I suppose.

Nick: Didn’t take me long to come around to this tune actually, just as long as I don’t have to listen to that Hannah Diamond tune again. Is it just me or is this pretty much ‘Sweet Like Chocolate’? Anyway, this PC Music nonsense seems like an excuse for music blogs to create some content around something which isn’t festival previews… anyway, it’s very cheesy but you can imagine a dancefloor responding really well to it. It’s quite idiosyncratic which I guess is the main reason to find this track intriguing.

Yolo: Yeah, it is a bit like ‘Sweet Like Chocolate’ I guess, but that could just be the pitched up vocals? I saw SOPHIE playing at Fabric and it was mental!

Nick: Future Classics are probably my other favorite label at the moment. One foot in pop and the other in a decent beat. There’s a Flume remix of this which is really good but I’m sort of preferring the original [Please note: Nick is sort of wrong – Ed.]

Another big anthem right now for me! One to go crazy in the club to. The video is great too.

This is the tune I’ve heard most off their new album and it sounds great, cosmic hip-hop. Although it kind of sounds like it’s going out of time throughout most of it, but I think that might be the point…

Nick: Good to have them back. Remember I came across them after my old local indie punted it to me, CD package was like this felt material and had pretty much no info on it. Really nice way to get into an artist in this day and age.

Nick: This is a weird track but in a really nice way, new one from the Leaf Label, you can always rely on them to do something interesting eh?

And finishing on another disco flavored tune… thought I’d start halfway through the track as it doesn’t really do much else for the whole thing, but I like how this one just keeps the groove going… 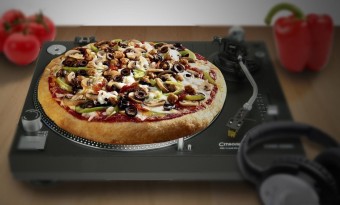 Back by (not particularly) popular demand, it's The-Monitors' podcast! Come and enjoy a slice of our new pizza-related format with special guest The Last Skeptik, as we dissect our favourite new tracks. And eat pizza. Obvs.
Read More