Lovebox Festival was the biggest event in London last weekend, and we sent County Durham-based artist ABSORB to Victoria Park to find out what went down…

So today I arrived in London for Lovebox Festival but my journeys (anywhere) never seem straightforward; this time having sat behind two ramblers (the outdoorsy types, not the ones who never shut up) for two thirds of the entire journey who had obviously never heard of any antiperspirant on the market. Getting wafts of B.O. every two or three minutes wasn’t exactly how I’d envisaged the journey to go.

On the way down, it dawned on me that London and I generally don’t get along. I get lost, frequently, and I end up accidentally asking other tourists where I need to go, only to be greeted with a shrug of the shoulders as they pull out their own map of London. Great. So as I was saying, getting wafts of body odour for two and a bit hours made me extremely pleased to arrive at King’s Cross, gasping for breath as the carriage doors opened onto the platform.

I usually stay with a friend, despite him living on the outskirts of London, except he’s now living la vida loca in Dubai so this was the first time I’d had to properly pay for accommodation. This is not, I repeat NOT, cool. £300 for three nights in what was essentially a room (luxuries include a bed and a shower) above a pub in Stratford, but it was a five minute walk from the tube stop so swings and roundabouts and all of that. My room was all on a slope; this was the first time I’d actually had to balance myself whilst brushing my teeth.

Having received emails from Lovebox about getting to the festival early as the queues would be extensive, it seems that I (along with the rest of London) had chosen to ignore their warnings and arrive fashionably late. My sister and I decided to be proper tourists and went to check out Camden, except it felt like the hottest day I’d ever experienced in the UK as far as I could remember and, feeling extremely self conscious as an unofficial Casper the Friendly Ghost body double, I found myself cowering for shade at every given opportunity despite wearing gallons of sun-tan lotion.

We finally made it to Victoria Park where the Lovebox gates had been open for around three hours… and it was RAMMED! I’d arranged to meet some people I’d only ever communicated with via Twitter, except having attended the festival two years out of the previous three, there were probably two thirds more people there than before (when I remember it feeling quite exclusive). I instantly felt claustrophobic. Not only that, I found out tonight that EE had two masts down in the area so I couldn’t communicate with anyone, and I mean NO-ONE. My lovely iPhone 5, a totally modern device, regarded by many as a leading light of what’s technologically possible on the go, was now just a really expensive watch.

The highlight of today was seeing David Rodigan. I’d missed him play in Newcastle and to see him shut down the main stage was a joy to behold, drawing for a mix of classic dubplates and all the biggest dancehall tracks of the moment. What a guy!

What I failed to mention about yesterday was that I’d worn ankle socks with my skater shoes, except with the amount of walking I’d done, I somehow managed to arrive back at my “hotel” with the back of my heels all ripped up, as well as the wickedest sunburn on the back of my neck. Not only that but it was karaoke night last night at my accommodation and I could hear EVERYTHING. Every wrong note (there were many), every scream of encouragement, every track selection getting more and more ambitious as pint after pint was downed. Fxxxing excellent. I wanted to go downstairs and give them my best rendition of ‘Mambo No. 5’ but I felt my sarcasm would have fallen upon deaf ears.

Anyway, today, owing to my ankle problem, I wore my newly purchased wellington boots. Wellies, denim shorts, my AVIT t-shirt, shoulder bag; the look was complete. We went to visit Brick Lane and I’ve never felt so many glares. It was like people were trying to burn my face off with their best “how very dare you!” expression. I should have worn a welder’s mask. I wanted to carry a sign simply saying, “Yeah, I’m wearing these, and what?” but the wellies were also on show because of the rain last night. I’d made that mistake in previous years in tiptoeing around massive puddles on site, so it was just my luck that the forecast was totally wrong and another scorcher of a day ensued.

Another day, another case of no signal, and I momentarily lost my sister in a melee of short shorts and facepaint but I used my Ray Mears-inspired guile (the power of the monobrow [and the horrendous shorts] is very real) to find her again. Panic over. Thanks again EE. Loving your work.

Flitting between different stages throughout the day, we saw Nas tear up his set with a catalogue of massive tunes spanning twenty years and then it was time for M.I.A., who I’d never seen live before (she was the sole reason I was here to be honest). She was late on stage and tech gremlins forced her to abandon her set midway, storming off in protest, but despite this she came back on after the Lovebox crowd chanted her name (with a sense they wanted their money’s worth) and she shut it down. Glow sticks, Paper Planes, the lot. BOOM!

Tattoos [in particular “Est. (enter year of birth)”]. Why do this to yourself?
Boobs.
Side boob.
Guys, if you’re going to show your pecs, please don’t look at every girl like they’re checking you out. They’re not. Please jog on with your “look at me I’m ripped and I love myself” expression, thanks.
Balloons. Is this the new thing? If this is the new thing then I hate the new thing.
Short shorts.

This was the year when I really felt Lovebox reached the next level. I get the feeling this was always the goal. My previous visits to the festival always seemed like they were getting busier but this year was like an explosion. The bigger the names you have performing, the more people are going to want to come, sometimes irrespective of ticket prices. With tickets ranging from standard entry all the way to Exclusive V.I.P., the more you pay, the more perks are available, obviously, but for some reason I didn’t feel any magic this time around.

Is it similar to when an underground MC or band that you really like go “commercial”? I guess it is, but that shouldn’t be reason enough to disassociate yourself from them. Capping ticket sales at a smaller number could have made it SOOOOO much better. On the whole though, taking into account the line-up and the amount of tickets they sold, the festival was undeniably a success. I just hope the festival remember their roots in years to come, and realise (figuratively speaking) what made them popular before they scored their first big hit. 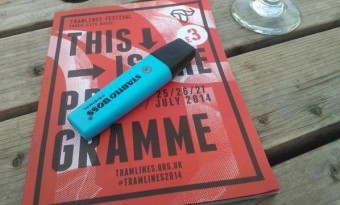 We're heading to Sheffield's ever-enjoyable Tramlines festival this weekend, and this is what we're hoping to catch (but will inevitably miss)...
Read More