Here I am again in Trendy Dalston, good old Trendy Dalston. More specifically the tiny but pleasant Power Lunches for an evening of rock: ‘It’s Dark and We’re Wearin’ Sunglasses’. Though I can’t get over the fact that no one is wearing sunglasses (though it is dark).

First up are Death Beams. My god are Death Beams young. From my withered crusty standpoint they look about fifteen, which makes me both angry and bitter. Well more so than usual anyway. DB (as I shall call them to fit in with the youthful abbreviated twitter-language of today) play an energetic mix of early Nirvana and Smashing Pumpkins-esque grunge rock. It’s all very snotty and bratty; like being bitten by a small and slightly skanky rodent in a Pixies hoodie. But being as old as Mumm-Ra my old bones are not overtly moved by this retro-rock, though it’s good to see the youth of today pro-actively picking up guitars and not just grabbing grubby handfuls of disenchanted apathy towards the current political systems.

Next up is the sweetly dismissive Go Home, a name which sounds like the most anarchic thing Charlie Brown has ever said to Linus. Go Home appear to be the young entrepreneurs who have organised this evening so going home is probably the last thing they actually want you to do. They play a blend of hardcore-tinged industrial post-punk; guitar and bass creating a clattering racket whilst a drum machine bashes out robotic rhythms over which what looks like a young Jesse Pinkman shrieking punkish sloganeering into the microphone. One slow number (who knows what the fuck it’s called, this is punk yeah?) channels shoegaze brit-pop and is actually the strongest song they play. “Anger is an energy,” but sometimes just moaning will do apparently.

Built up from parts of bands Dignan Porch and Old Forest, Aztral Playns are a three-piece trading in a mix of psychedelic stoner noise rock. Mainly instrumental (though there are a few vocals here and there), the sound is proggy and feels very loose and improvised giving the impression of a couple of friends having a good time jamming. It’s free and breezy but has enough heavy peaks to satisfy the head-nodders in the room. Setting the scene nicely for the headliners: Cold in Berlin.

It might be Cold in Berlin, (it really might, I’ve never been) but in the incredibly small Power Lunches, after three bands, it’s fucking hot. It could be this infernal heat that slightly melts Cold In Berlin’s icy goth punk berg. The first two songs are attacked powerfully and stamped out like escaping colour in Robert Smith’s drab monotone home. Vocalist Maya’s voice lunges out like a riot grrrl Siouxsie Sioux as the band create a solid rock foundation for her to launch from. It’s all going fairly well.

Then about three songs in something happens.

Things just fall a bit flat and my interest is lost. The foundations crumble revealing loose hinges and flat-pack furniture. The band give all (despite the fairly low turnout) and Maya does her best to whip up some atmosphere, utilising some classic witchy finger pointing and hair swishing, but somewhere amongst all the peaking guitars and ‘dark’ lyrical imagery I’ve fallen into a metaphorical ditch and can’t climb out.

It all just gets a bit samey.

In general, Gothic imagery is always at its best when the contrast between light and dark, black and white, is very crisp and clear, allowing for clashes and ideas to emerge in the areas in-between (look, I’ve read books!). Unfortunately, here it all becomes one large grey smudge.

It’s as scary and bleak as a Tim Burton film. That is to say neither bleak nor scary, leaving the lyrics feeling as pointless as a Conservative cabinet re-shuffle in 2014. Sure Gove’s out but so what, if the lyrical content ends up the same in each song and the voice never changes? 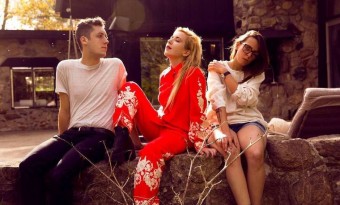 Anticipation was high for Austra's latest visit to London, but both band and crowd were let down by dreadful sound...
Read More