In 2004, when The Libertines fell from grace in a stinking mess of tabloid slander and incarceration, I wasn’t angry, I was just disappointed. The most promising English band of their generation had it all, but pissed it up the wall in spectacular fashion. The tragic trajectory of the likely lads’ swift rise and fall was a lucid parable which taught fans never to rely on their heroes and always prepare for the worst. The Good Ship Albion’s triumphant maiden voyage swiftly led to a shipwreck of wasted potential and broken promises. Twelve years since their seminal debut Up The Bracket and ten since their breakup, the bitter taste has gone.

This Saturday saw a reconciliation of The Libertines in a whirlwind knees-up of overpriced drinks and crowd rushes. The announcement of a second reunion for the Hyde Park British Summertime Festival was met with elation and wide press exposure, and everyone from Alex Turner to your mum was gushing with excitement and troubling my ear hole. Doherty’s transparency about the band’s financial motives for playing the show (the taxman will be very happy this July) only fuelled the fire in social media and the music press, the arse-licking NME acting as an enthusiastic Pudding Lane.

The Libertines’ messy divorce was a rock’n’roll soap opera which was encouraged and exacerbated by the NME, who always claimed the band as their own but put moral distance between themselves and The Libertines when things really went pear-shaped. It seems strangely fitting that the NME have led the barrage of propaganda and rumours about the band’s over-hyped reconciliation. The palpable excitement and controversy surrounding this show was natural and organic, with the music press hanging on the coat tails of jilted Libertines fans who never got to see the band the first time round or thought they never would again. The prickling atmosphere of Hyde Park on Saturday was not the kind the music press can muster.

Now then, first thing’s first: The British Summertime Festival series has seen Hyde Park transformed into a kind of shit Disneyland. The beautiful stage and 60,000 drunk, sunburnt people cannot hide the fact that this is not a festival. This is a cash cow in disguise, struggling to maintain cover under the extensive weight of too many City girls wearing daisy chains made from flowers they picked from a pissy embankment at the train station. Strict alcohol searches on entry meant that £5 pints of watered-down line cleaner was the drink of the day, but if you like expensive beer and cider that tastes like Mr Muscle then you will love it!

The main injustice of the British Summertime Festival is the fact that the majority of punters are kettled behind barriers and screens at the far end of the site, annoyingly close to the snaking queues of people waiting like abattoir cattle for their plastic pint. The ‘VIP’ area was relatively empty, with the majority of the 60,000-strong crowd squashed into the standard ticket price area, frustratingly far from the action.

After queuing for ages for drinks and then spilling said drinks, I was decidedly mardy by the time The Pogues came on stage. Shane and co. served as a perfect support for The Libertines, picking up the pace after the choral, flabby jetlag of Spiritualized. The Pogues are synonymous with Kings Cross in the same way the The Libertines have become synonymous with Filthy McNasty’s and Bethnal Green; both bands are a crucial part of London’s musical mythology, and their music constantly romanticises and references the capital.

MacGowan’s band could be used as a good example for Pete & Carl; The Pogues are professional, still touring every Christmas and playing festivals throughout the year. They were famously one of the most hellraising bands in the world, and their hard drinking and excessive drug use led to the inevitable car crash and sacking of Shane in 1991. Yet The Pogues are touring again, successfully united for years against all the odds, blasting out their distinct brand of London Irish Punk to younger generations. They maintain the air of haggard war heroes, who’ve seen it all and know better.

Their set played like a best-of album, with drunken, lurching stompers like ‘Streams Of Whiskey’ and ‘The Sickbed Of Cuchulainn’ meeting crowd-pleasing ballads like ‘Rainy Night In Soho’. The Pogues eased the palpable tension and energy in the crowd brought on by the VIP/crowd-management situation and the constant stops and starts caused by hairy problems in the front including a heart attack. Their set kept the people happy, and standard finale ‘Fiesta’ was followed by mass lunges towards the ‘bar’ for a pint of Toilet Duck before the inevitable crush for the Libertines.

A montage of iconic stills and footage from the Albion Rooms precipitated the band’s arrival and the crowd grew more impatient. People began trickling into the ‘VIP’ section, hopping the barrier and forcing their way past the security. When the band came on stage, the security stopped resisting as swells of people started to pile over the barriers, racing into the undernourished ‘VIP’ section and beyond, past the next set of barriers and into the crammed front. 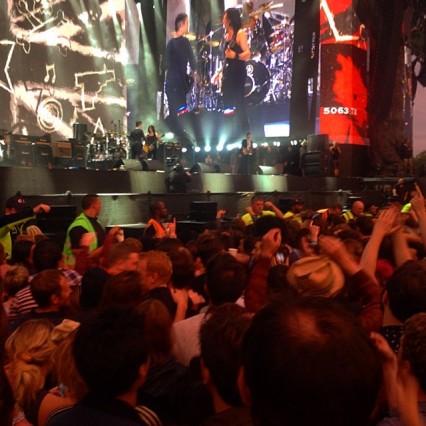 The Libertines opened with the Tony Hancock-infused ‘Vertigo’, a classic Libertines tune and the first song from their début. Second song ‘Boys In The Band’ was stopped twice due to kerfuffle in the front, a constant pain throughout the set. Carl only managed to get through one verse of ‘France’ before having a paddy and telling fans to stop climbing the towers, punctuating yet another tiresome stop near the end.

There were some surprises in the set, most notably the excellent ‘Love On The Dole’, a forgotten classic from the ‘Legs XI’ sessions, while the omission of ‘What Became Of The Likely Lads’ was also unexpected. Up The Bracket’s controversial quiet number ‘Radio America’ was met with muted response, and a spectacular ‘Time For Heroes’ was cut due to problems in the crowd. The band strayed from the path at times, with a muddled ‘Campaign Of Hate’ while Doherty stumble-bummed his way around ‘Albion’. ‘The Saga’ fell short.

But The Libertines were never a band to smooth over imperfection, and if anything their performance on Saturday demonstrates a tightness and capability that they have never displayed before. The raucous clatter and haphazard nature of their early live performances has been replaced by a measured, well-rehearsed reliability and power that is not as unpredictable. Some of the soul of the music has been deflated by this new found efficiency, but there is still venom in The Libertines. ‘What A Waster’ is still as vicious and lyrical as when first released, its “straight up her nose” line resonating especially, while the Caledonian Road chase on ‘Up The Bracket’ continues to thrill after all these years. The Johnny Borrell-baiting ‘The Boy Looked At Johnny’’s Soho refrain got the loudest singalong of the night, and the anthemic ballads ‘Music When The Lights Go Out’ & ‘What Katie Did’ provided shelter from the more racy likes of ‘Don’t Look Back Into The Sun’ and ‘Horrorshow’.

Finishing with ‘I Get Along’ & Siegfried Sassoon’s ‘Suicide In The Trenches’, The Libertines disappeared. While the day was turbulent, there were thousands of very happy fans who left the park, and no doubt The Libertines and the taxman left happy too. They may be older and flabbier, but so are you. John & Gary may have looked like kids traumatised by a messy divorce, but needs must.

A brisk and joyful reminder of the good old days.

Setlist : Vertigo, Boys In The Band, The Delaney, Campaign Of Hate, Time For Heroes, Horrorshow, Begging, The Ha Ha Wall, Music When The Lights Go Out, What Katie Did, Boy Looked At Johnny, Cant Stand Me Now, Last Post On The Bugle, Love On The Dole, The Saga, Death On The Stairs, Radio America, Don’t Look Back Into The Sun, Tell The King, Up The Bracket, What A Waster, France, Albion, I Get Along 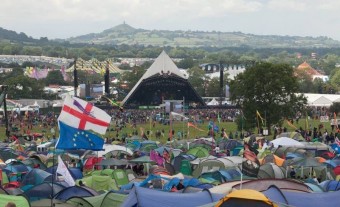 Fear and loathing in a Somerset mudbath... it's our review of Glastonbury 2014, from the divine Dolly to debauched disco dancefloors, via a whole lotta mud...
Read More