If you’ve heard of French producer DyE, there’s a high chance it’s because you’ve seen, and were probably subsequently freaked out by, the video for his 2011 single ‘Fantasy’. A bizarre story of teenage sex and tentacle-based horror in the Manga tradition, it’s been watched over 45 million times on YouTube, and judging by the most recent comments is still racking up views regularly.

I have no idea whether that resulted in significant sales for the track itself, a fairly slick slice of electro-pop that would’ve slotted straight into the Drive soundtrack, but judging by his latest offering I’m guessing it didn’t do any harm. While the video to ‘She’s Bad’ initially appears to be just a slightly more imaginative take on the sort of quasi-porn dance music videos that limit the smut just enough to get shown pre-watershed, its mixture of eye-catching production, unsubtle sexual connotations and a truly shocking twist suggest DyE has found a winning formula and is sticking to it.

The initial concept involves a couple moving through a series of flirtatious interactions, but with their faces and various other body parts overlaid with wildlife stock footage. “It is about a girl, a bad one, who’s too sexy for human beings,” is DyE’s gloriously French summation of the narrative, and while that might sound facile on paper, it not only looks brilliant (almost like a moving Magritte painting at times) but contains a moment that will make you go ‘WOAH’, and then shortly afterwards, ‘AAAAAAGH’. No clues, but it’s quite something.

The video was created by celebrated French directors Dent de Cuir, who’ve previously got into all sorts of monkey business with the likes of Modeselektor, while the animal theme also bears (no pun intended) resemblance to one of our favourite videos from last year, the mimicking mayhem of ‘Humanity’ by I AM UN CHIEN !!. The vintage electroclash sound and appearance by electro-rap veteran Egyptian Lover suggest the music may not win any awards for originality, but when it comes to videos it looks like DyE has another hit on his hands… 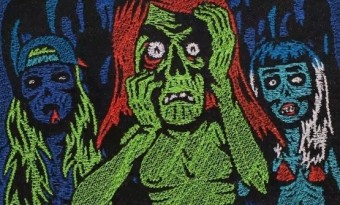 Making the unlikely connection between sewing and Stoner Rock, this 100% embroidered video by Throne is one of the most mind-boggling we've ever seen...
Read More