Before we start, I should admit upfront my unbridled love for Pulp. They were the band that changed my young, innocent life forever. Well we all have one, don’t we.

After hearing Different Class, something changed. Suddenly I could have long hair, wear velvet jackets and corduroy, CORDUROY! As a band they meant (and mean) the world to me. Capturing a sexy, angry bitterness like no one else around. The songs spoke to me in a way that no others had. Judging by this film, I’m certainly not the only one.

‘Pulp: a Film about Life, Death & Supermarkets’ is not necessarily a film about the band ‘Pulp’; that is, the collection of musicians – Jarvis Cocker, Candida Doyle, Steve Mackey, Nick Banks and Mark Webber (and several others). It’s more a film about the city of Sheffield and how its formative impact defined Pulp and thus how Pulp had an impact and defined Sheffield. Like a snake eating its tail.

The film is not your usual chronological music biography nor concert film. Director Florian Habicht has stated that he “didn’t want to make a film which gave audiences the same information as Wikipedia or give an experience that could be had through another medium.”

Sheffield is really the star of this documentary. Shots linger on typical Sheffieldian landscapes – cold-looking council estates, red brick houses, shopping centres – transforming them into beautiful hives of thriving life, each bee with a story to tell. And do they tell! Amongst interviews with the band, we are treated to some hilarious local characters who air their views on everything from music to the meaning of life. My personal favorite is Terry the news-stand vendor.

At the heart of the film is glorious footage of Pulp’s final ever gig, a nostalgic homecoming held at the Sheffield Arena. The songs sound fantastic, vast and iconic, genuine classics of our times. The film really captures the visceral feel of seeing them played live. Jarvis writhing around like a sexed-up snake while the band wrap you in the music and make you want to melt away into the night.

These moments are the film’s beating heart and pulse with vibrant energy. Awash in pink neon light they pump excitement into the surrounding shots of the Steel City.

Pulp fans will clearly revel in the gig footage. That’s a given. It sent shivers down my spine, and at one point I almost got all teary. But it’s an energy and feeling of positivity the film captures that really makes it worth a watch for non-Pulp fans.

Following our screening there was a Q&A session, and the band were asked if the film would act as a full stop in the career of Pulp. Elusively, Jarvis responded that it was actually more of a comma, offering the tantalising possibility that there could yet be more to come from one of the greatest bands I’ve ever heard. Full stop. 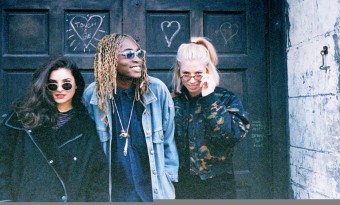 It's official, 2014 has had some f***king amazing pop songs. So rather than wade into the debate about their worth, Nick Burman would just like to play you some of them...
Read More