Most singers would kill to have producers like SBTRKT, Rustie, Machinedrum and Dorian Concept queueing up to provide them with beats. Not only would it guarantee you the ears of their fans right off the bat, but a press release bejewelled with such glittering names would instantly snare the attention of any dance music journalists who received it.

Instead, having worked with all those producers and more by 2010, Sweden’s Kissey made a move that could’ve killed her career: she moved to New York (not that bit) and eschewed big-name producers in favour of locking herself away to learn production and release the results on her own label, KISSKISS Records (that bit).

This week’s release of her Initiation EP suggests it was the best move she could have made. Her new-found mastery of production makes her seem comfortable in pretty much any electronic genre, from the wubby bass of ‘Hold Me’ and its imploration to ‘let me mesmerise’ (like you have much choice) to ‘Dance the Pain Away’, which, despite a less provocative title than the related Peaches classic, comes with an ultra-raunchy video (below) that shows her mind is on a similarly single track.

There’s nary a club in the land that wouldn’t benefit from having a track from Initiation blasting through its speakers. Opening track ‘Come Nightfall’ starts off sounding similar to another self-taught production prodigy, Bristol-via-Berlin’s Emika, before the initial darkness opens up into a glorious nu-disco number. If we had lasers in the office I’d have been reaching for them within three minutes. As it is I reached for the energy-saving SAD lightbulbs instead, almost blinding myself in the process (those fuckers are BRIGHT).

Elsewhere, ‘Fuse’ is as filthy as you like, with bass that makes you want to buy a sub-woofer big enough to sit in (or have sex in), while closing track ‘Love & Ecstasy’ is tightly bound by every string Kissey has to her bow. Starting off sounding like she’s intoning her sultry lyrics from a dimly lit basement, a euphoric rise suddenly takes it onto the rooftop and beyond. With music like this, we can only see her heading higher and higher. 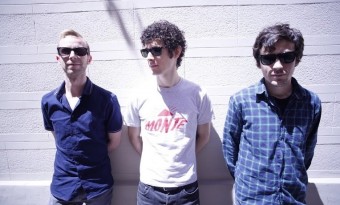 The headline slots at Primavera may generally be saved for Stateside performers, but Catalonian trio Lasers prove that some of the best surprises are sourced locally...
Read More