There’s that funny thing with electronic music, where you have to describe everything synaesthetically. Apart from samples, everything is generated from artificially distorted soundwaves. Sometimes these are emulating real instruments, but it’s rare. It means everything I’ve ever written about electronic music sounds like I’m having an emotional outburst about feeling a bit sick. Everything is swollen squelches and warm rushes. Nothing really makes sense, because there’s nothing much to grab onto.

Everyone who has ever heard Plaid before knows what I mean. Plaid have sounded approximately the same for approximately their whole recording career, which is now over twenty years long. Ed and Andy have been at this for a while, and like Boards of Canada, they found an aesthetic and they stuck to it. If you like Plaid, you’ll definitely like this. Which sounds trite, and it is, but it’s true. This is a lovely Plaid album. Made by Plaid. For Plaid fans.

It’s also not the whole story. Because to a greater or lesser extent, I’ve been bored of Plaid for a while. And this record has got me. Wholly and utterly got me. I can’t get to the end of the record without flipping it over and starting again. I think I’ve been listening to it solidly for about a week now. Any time I’m not trapped in some other room, with some other task to do, I’ve been wrapping my heart in Plaid.

This album gets me in the way Plaid used to get me. Back when I was an over-excited teenager, drinking everything that Warp would pour into my cup. This might, just barely, actually square up to that perfect early expression of Plaid at their most brilliant, the P-Brane EP. Four unique, distinct and perfect distillations of the Plaid aesthetic. A deconstruction, a dance, a dream and a delusion.

This album has that sense of exploration within it. A tone crafted and perfected into different forms. The archetypal Plaid track bent into different shapes, pushed against different textures. Reachy Prints sounds like Plaid at their best.

So what do Plaid sound like at their best? All the syncopated rhythms, drifting backgrounds, and those speculatively building bell-like melodies. The beats are off-kilter in that way they are. The plinks plonk, with additional plinky plonks in between. Simplicities become complicated. Everything sounds like it should be a soundtrack, and knowing Plaid’s tendency for collaboration and multimedia, probably is.

That’s what Plaid sound like. It’s still dance music for trees. Techno for gnomes. A soundtrack for a utopian future nightclub. Everything is present and correct. Everything is immaculate. Those twenty years of experience are present in every single note, tone, beat and silence. Sounds drift and shift with precision. The studio does exactly what they want, allows them to weave counterpoint around counterpoint, concealing depth behind lightness.

Opening track ‘OH’ starts with a swelter of Benet Walsh’s autoharp, then drifts into a lull, where slow, tentative drum beats build into one of those familiar rhythms. The synthesisers start to pick out one of those familiar melodies. The bass underpins one of those familiar chord structures. It even breaks out into one of those familiar staccato breakdown sections. All washed over with autoharp, a half-sung background. It’s nothing we haven’t heard before. Except that it’s also glorious. It’s such a warm and open and beautiful starting point. As it breaks for a mandolin noodle and a bass motif, the drums drop out and the deftness of the harmony stands along for the finale, there is a statement. We are Plaid, you are in safe hands now. Come with us.

‘Nofavanny’ uses a fast-paced wubwub bassthrob to underpin a series of harmonic explorations. The rhythms here are simple, but rest is intricate and delicate. ‘Slam’ is a clear favourite, feeling like a love song to ’70s arpeggiators. Jean-Michel Jarre twists around John Carpenter for the duration, but every time you think it might be taking a rest and sitting still, you find it’s building into a new phase. Vangelis pads drift in the background, immaculately framing the simple interactions of the interlocking melodies. It’s all actually quite simple, but it’s rich, deep and beautiful too. Plaid are masters of pulling elements out of the mix to show you just how simple and pure what they’re playing with is. They want you to see the wood for the trees. It doesn’t feel like they’re keeping secrets, it feels like they are showing you secrets. Earnest and beautiful secrets.

The stunning ‘Matin Lunaire’ moves through a number of different drum patterns and moods, every step assured and delightful. The open optimism of the last movement is heartfelt. The rhythm simplifies, unsyncopates, and leaves space for a chord sequence to put you to bed.

Tether (also available as a multimedia interactive that I can’t get to work on my computer), starts with a slow bassline and drags it through a tunnel of percussion and distraction, moving into a threatening landscape before quickly building into a mechanical tower. Every time it reduces back to bassline it shifts and opens out, every time if pours something new on, it feels like exploring. Like most of the album, there is this real sense of narrative and journey. It’s playful though. It never feels like an attempt to tell you a story, just an attempt to look around a world, see what is there.

The album closer ‘Liverpool St’ is a beautiful example of what is so special here. The Plaid sound, etched not just in the manipulation of synths but the manipulation of an orchestra (artificial or not, I don’t really care, Plaid never feel plastic anyway, even when they fade into the background). A simple synth walks into a forest of woodwinds, strings and tambourines. The pulse quickly builds pace and urgency. This is no forest, this is definitely a train station, you can hear the rhythm of the wheels picking up speed, rolling through a bustling metropolis, setting out on a journey. The ‘real life’ instruments are building exactly that Plaid landscape, but it’s fresh and new and lush, real and beautiful, a new type of authenticity. When it fades into the background for a stunning squeezed, spiralled and chopped-up synth part, it’s incredible. It’s blissful. The excited synthesiser pushes against its real life counterparts, doing the things only it can do, before fading back together. It’s a stunning track, only marred by not exploring this combination for long enough. It builds, it becomes, and it’s over before you’ve realised how hard you should be dancing.

Reachy Prints is beautiful. If you haven’t heard Plaid before, I would actually recommend starting here. They aren’t as without bedfellows as they used to be, with Eastern European acts like the Dva (not to be confused with DVA) and Floex operating in a similar ‘dance music for imaginary creatures’ space, but they’re still masters of playful delicacy, and it feels like they are finally showing off about it again. This feels like the archetype they’ve been drifting around for twenty years.

Once you’ve dug into this album, check out their collaborations with the otherworldly vocalist Mara Carlyle (whose re-purposing of some of their tracks is sublime (see ‘But Now I Do’ and ‘Alive’), go and watch the marvellous Tekkonkinkreet and bathe in the brilliance of their soundtrack work, get your hands on P-Brane and have an unexpectedly varied dance, wander around the creepy world of Not for Threes, the slightly more optimistic Restproof Clockwork, and the slightly more robotic Double Figure.

Because while Plaid could easily be accused of being boring, it would always be a lie. The last few studio albums may have been treading water a little bit, but it’s always been beautiful water – we just tend to judge the experienced and familiar harshly. This album sounds like Plaid. And that’s all I really wanted.

Excuse me while I flip the record over again. 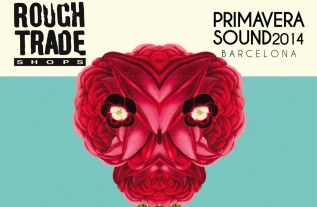 Viva la compilation as Rough Trade and Primavera Sound have teamed up to offer up a selection of the festival's 2014 performers...
Read More