I’ve elsewhere referred to Agnes Obel’s Aventine as the sound of autumn, and she proved it again on what started as a sunny spring evening in Bristol. Supported by Melanie de Biasio, she left a packed St George’s Hall spellbound.

Recent Gilles Peterson favourite de Biasio opened the night, and her gently authoritative jazzy vocals enthralled whilst backed by what sounded an awful lot like Spirit of Eden-era Talk Talk (a guy playing not many notes on a guitar, very nicely. Occasionally de Biasio added some flute). Only the strut of the Belgian’s “I’m gonna leave you” hinted at the bolder side of her craft, and threatened to break the lowly-lit, sparse musical spell she had woven. She left the stage as unassumingly as she had taken it.

An interval and audience change of seats later, Agnes Obel, her cellist, and violinist took the floor. Obel’s music is, perhaps more than anything else, work of light and shade, its visual evocation as important as the tone and notes. Her often bright 2010 debut album Philharmonics, with its relatively expansive arrangements, only intermittently hinted at the embers-in-darkness feel of second record Aventine. In keeping with the spell cast by de Biasio, the Dane was a lady of few words: an introduction of her German cellist and Canadian violinist here (Nils Frahm collaborator Anne Muller and Timber Timbre member Mika Posen respectively), the meaning of ‘Dorian’ there. Some kind words about Bristol, a dedication of ‘Run Cried the Crawling’ to her late father, a reminder that encore song ‘Close Watch’ is a John Cale cover. That was about it. A dark, enveloping St George’s isn’t crowd banter’s natural habitat, and in this case far better for it; babbling breaks spells.

The sense of the mesmeric which defined this performance was further informed by the artist’s predilection for waltzes, from Tiersen-like opener ‘Louretta’, through ‘Philharmonics’, ‘Smoke & Mirrors’ and the backing strings on ‘Aventine’, to ‘The Curse’. The effected waltzing strings of the latter brought the audience back to the waking world, before a two-song encore.

Contemplative seclusion is also central to the feel of Obel’s music, and through the use of darkness it’s a trait that stood out even in an arena of a few hundred people. Where Philharmonics was a gentle doze, Aventine was a deeper meditation, and generally the mood of the latter (literally) coloured this gig. It’s no coincidence that the lighting went from ‘not a lot’ to straight up mimicking Aventine’s cover, and each member of the trio had their own wire bulb – an individual Davy lamp for the collective voyage. One gets the impression that this barely-illuminated, low-stimulus bubble is as important for Obel as the listener; much of her music sounds as if its strength and depth would dissipate under harsh light. That said, the stratospheric coda of ‘On Powdered Ground’, the finest moment of this gig, could have survived a nuclear explosion.

When I first heard Aventine I wondered whether its elegiac charms, so suited to autumn, would survive sunnier times. As it turns out, the music – with a little theatrical help – creates the spell of comforting darkness, not the other way around. In this case the enchantment concluded with the audience exiting to a suitably black and autumnally cold night. 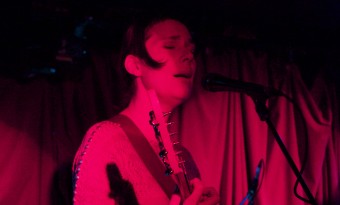 Ranging from the deeply personal to the fervently political, the solo work of Stereolab's Lætitia Sadier charms the crowd at this intimate gig...
Read More