Imaginary Forces, aka Anthoney J. Hart, is known for his dark and uncompromising electronic excursions, but his influences are more diverse than you may imagine. For example, he describes his latest (and perhaps greatest) EP, Corner Crew, as sounding “as if The Fall and King Tubby got together to record cover versions of Pan Sonic”.

While sonic experimentalists Pan Sonic are clearly the closest sonic relation out of the three, the fractured poetry and no-nonsense, working class stance of Mark E. Smith inhabits the essence of the record, while King Tubby represents “not only the mixture of cultures in my family home, but the origins of dance music and the pirate radio/dubplate culture which ties into Jungle, Hardcore, etc”.

A veteran pirate radio DJ himself (he recently spoke to The Quietus about his long-time association with Rude FM in a fascinating feature you can read here) Hart’s work has developed into something that exists in a realm far removed from more dancefloor-orientated electronic music. From the rumbling bass and static hiss of the title track to the lurching rhythms of ‘We’ve Gone Too Far’, the triple metre of which feels like it’s been pounded out of shape with a mallet, it’s not hard to see why Hart says it “seems to be the most accessible work I have done to date”.

Corner Crew will be released as a limited edition, hand-stamped white label 12″ on Hart’s own Sleep Codes imprint, funded by pre-orders on his Bandcamp page. Here Hart takes us on a tour of the record’s themes, which range from 18th-century Irish political activism to the appropriation and sterilisation of working class culture…

“The whole EP is designed to play upon and subvert people’s expectations, and perhaps prejudices. The title track plays upon the preconception of a group of Rude Boys hanging out on a street corner, and the “Frozen Version” references Dub instrumentals as well as serving a literal representation. The track is actually about being out of work and desperate enough to take a cash-in-hand job where you have to wait on the street corner first thing in the morning, freezing to death, for the van to pick you up to take you to the site.”

“The title again plays on people’s preconceptions about race and culture, however it is actually a reference to “a secret Irish agrarian organisation in 18th-century Ireland which used violent tactics to defend tenant farmer land rights for subsistence farming. Their name derives from the white smocks the members wore in their nightly raids, but the Whiteboys were usually referred to at the time as Levellers by the authorities, and by themselves as “Queen Sive Oultagh’s children”, “fairies”, or as followers of “Johanna Meskill” or “Sheila Meskill”, all symbolic figures supposed to lead the movement. They sought to address rack-rents, tithe collection, excessive priests’ dues, evictions and other oppressive acts. As a result they targeted landlords and tithe collectors” (Wikipedia).”

“This track is more of an oblique reference to the continued perpetuation of “class” and “culture” in Britain, particularly London. I used the Reggae elements specifically to draw upon my own family’s mixed heritage and also as a shorthand for the multicultural and working class background that I come from, something that seems to be perpetually co-opted by the middle classes and then diluted and sanitised for their own consumption, or for some sort of vicarious kudos points. You only have to look at the current sanitisation of Jungle and pirate radio at the moment for an example of how this kind of sterilisation is an ongoing thing.”

“This was the first track to be made for this EP. The reference is a rather obvious one. We have gone too far in this country. For myself growing up as a teen in the ’90s it felt like we had reached a point of integration and acceptance, and that unity was a way forward, culturally, but perhaps not regarding class. However, it seems to me that we have very quickly regressed in our attitudes and politics in this country and I personally believe that we have regressed way too far, to the point where it feels to me that if you are of a certain background or of a certain wage bracket then you are really not wanted here anymore.

Either join the crew or get beat down. The tag line is a track title from a Younghead 12” on Reinforced Records which I have taken and re-contextualised to represent that feeling that you had to either join society and what it expects from you, or get beaten down to the point of submission. To quote the infamous skit… “I know my place”.”

Protomartyr blasting away the corporate-rock crowd 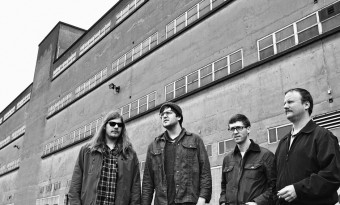 SXSW might be more about the brands than the bands these days, but Detroit's Protomartyr stood out amidst the corporate-rock to catch guest editor Marcus Harris' eye this year...
Read More