NITCH is a band from Barcelona that’s been going for almost seven years. The project started in the spring of 2007 when Helio, lead signer and guitarist, was 14 years old. After countless gigs all over Spain, they have become one of the key reference points in Catalonia for grunge, ’90s-style indie and noise rock.

NITCH is all about heavily saturated and distorted guitars, fuzz and harmonies that will please any Nirvana or Sonic Youth follower. In May 2012, indie label Boston Pizza Records released 4 tracks on cassette, in advance of the band’s first EP, JC/29. Self-released with a limited 10” vinyl, it was launched at the final edition of Primavera Club in 2012, where they performed alongside such acts as Crocodiles, The Soft Moon and TOY.

After changing drummer in Spring 2013, it was clear that their main strength was in their live performances. After playing in Madrid, Malaga and Algeciras amongst others cities, the band worked towards recording an EP that could solidify their sound and take it to a wider audience. That EP was released last week and titled ATWA, a direct reference to Charles Manson’s uncompromising ecological mandate.

Having already picked up attention from VICE Spain and other Spanish blogs, the feeling is that with this release they have reached the necessary consistency and confidence to take their sound outside Spain, and hope to connect with listeners from the UK and United States. ‘Time Machine’ and ‘Sunday Sunday’ are two high-speed rollercoasters on a collision course, that could light up any crowd from a small club to a festival.

The former in particular is a whirring buzzsaw of a track that feels like a grittier version of Autolux, while ‘How Did You’ throbs with the passionate tension of Six By Seven. EP closer ‘God Knows’ sums up what NITCH are all about; its epic transcendental feel representing the essence of the band in the best way possible, and providing a nice link with the title of the EP.

You can find out for yourself by downloading the whole damn for free over at Bandcamp. One listen and we’re sure you’ll agree that NITCH have found their niche…

The Darlingtons receive some heavy 'Rotations'... 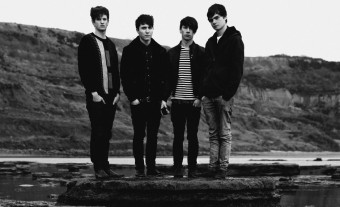 The visuals for the latest brooding number by The Darlingtons makes you wonder, "what if Ben Wheatley made music videos for a post-rock indie band?"
Read More