As a musical genre, ‘trancerock’ sounds like it’ll be bloody awful, conjuring grotesque visions of The Edge transposing Paul van Dyk arpeggios, or Tiesto jamming with Muse – a bloated, day-glo abomination, ipecac syrup for the ears. So the fact that Berlin-based four-piece Brace/Choir describe themselves as a “trancerock quartet” on their Facebook page is initially somewhat worrying – should I listen to this CD, or smash it into a million fragments so that the potential horror within can never be unleashed?

Luckily I went for the former, as in every respect other than a dodgy genre name, Brace/Choir sound like a band who’re trying to actually do something (ie, more than the bare minimum many groups try to get away with). They swap instruments between songs, rotate vocal responsibilities, write each other’s lyrics, and pen songs about multiple personality disorder and identity theft. And while ‘trancerock’ may not catch on, it has to be said that it’s not an entirely misleading description – the warming, whirring psychedelia of debut album Turning On Your Double, which follows up 2010’s self-titled EP, is capable of putting you in the most delicious daze.

Opener ‘Biond’ may see you slip into that state almost immediately. A drifting, textured track that occasionally feels like a half-remembered dream vision of Sub Pop’s Papercuts, it’s painted with fluid, impressionistic strokes that mean the crescendo it slowly builds to never threatens to remove the listener from their reverie. You couldn’t hope for a smoother introduction to the Brace/Choir sound.

Indeed, the band’s rotation policy has an interesting effect on the music, giving the album a subtly shifting quality. It would be trite to imply that Brace/Choir sound like ‘several bands in one’ as a result, but their differing techniques help new facets to suddenly gleam, like a diamond rotating in a sunbeam. The heavy-lidded atmosphere and gently glowing guitar of ‘Be Let Down’ orbits around a Mazzy Star vibe, while the driving ‘Satisfier’ turns the band’s kaleidoscope upside-down and takes them into pounding spacerock territory (less engaging in my opinion, but no less deftly done).

What’s curious is that, despite the lyrics coming from a number of tongues, the vocals are the glue that most strongly binds the tracks together. Whether reworking a Tarkovsky poem from Stalker in ‘Five Fingered Leaf’ or dissecting the death of Osama bin Laden in ‘Fallmen’ (the oscillating organ of which has an almost nauseating effect), the voice always seems to be coming from the same place. Even on more distinctive tracks, such as the the brilliantly fuzzy country-fried strut of ‘Coil’, you would never guess the band possessed anything other than a singular vocalist. It’s not like they all adopt an identical register or delivery either, more that they all seem to simply be coming for the same place. If the album’s title suggests the Vladimir Nabokov novel Despair, wherein a man chances on, and strives to manipulate, his exact body double, then this aspect of Brace/Choir feels like an auditory echo of that theme.

If you find yourself resistant to the band’s method of musical hypnotism, you might find some of the album drags a bit – half the tracks travel beyond the six-minute mark, which will no doubt be seen as indulgent by the un-enamoured. However, those under its spell won’t even notice. And while the band’s hallucinatory fuel is largely formed of repetitive phrases over extended periods, there are plenty of intriguing objects floating in the ocean of their sound – the ghostly trumpet in ‘Enemy’s Friend’ for instance, or the electric jetsam that peppers ‘Five Fingered Leaf’. If you like Turning On Your Double on first play, you’ll like it more with every listen.

The album’s swansong, ‘1 is 2’, is probably the one that justifies the still-dubious ‘trancerock’ term best. The snaking riff could almost come from Jeff Buckley or Jimmy Page, yet the twisting time signature, organ drone and undulating vocals slowly melt, and simultaneously encompass, your mind. It’s a song of gently churning beauty at the end of a work that shows great ambition, and even greater craftsmanship. If this is trancerock then, despite my initial misgivings, I’m in.

Lushes - What Am I Doing 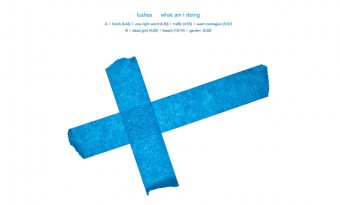 The disparate influences that moulded Brooklyn duo Lushes (Fugazi for one, Rachmaninoff for the other) play off each other perfectly on their debut album...
Read More