This show at Hackney’s Sebright Arms was an unexpected addition my calendar; a matey called me up to see if I wanted to go, so I grudgingly cancelled all my plans (ready meal + House of Cards) and went along to keep him company.

I’ll be honest, I’d never heard of any of the guys on the bill before last night, but I guess that allowed me to make like the BBC and claim impartiality. This impartiality was slightly tested by Bad Breeding, who took to the stage first to play to a more than respectable audience for a support act. Though they have less in common than Miley and Megadeath, the bassist’s haircut made me think of ’80s boyband sensation Bros (if you’re reading this dude, don’t take it as an insult – their hair was frickin’ awesome) so vividly that I had to battle with my head to shut off Matt Goss’ chorus on “When Will I Be Famous?” and actually hear the self-proclaimed mongrels do their thing.

These guys were actually fucking good, and probably the most interesting act of the night for me. Schizophrenic and malicious guitar combined with their adventurous (both in terms of hair and music) rhythm section, and topped off with a frontman who managed to be pretty articulate at a thousand words a second, made for something that I’d like to hear more of.

Next up, LSA (Love Stays Alive) sauntered onto the stage, befriending the crowd with ease. They were very “cool” and looked pretty comfortable on stage, and it was just that which let them down for me. I felt as though someone had loaded them and their ideas into a slow-cooker in the mid 2000s and let them really tenderise into melt-in-the mouth professional indie-pop, all wholesome and reliable.

I read around these guys a bit just now, and wasn’t really that surprised to find comparisons with The Strokes and the Walkmen from other reviewers. I love both of those bands as they remind me of being 14. I’m now 24. There was one particularly unfortunate moment when matey leaned over and shouted over a particularly shiny guitar line, “doesn’t this remind you of Kings of Leon’s third album”. Quite.

Spring King. With it being March, there’s an opportunity here for me to say things like “deservingly self-crowned laurel-wearers Spring King held court with convincing ease, their subjects transfixed in appreciative deference”, and though that statement may be valid (it is), I won’t make it because it makes me sound like a twat.

But it’s true. They were just *very good*. No posing, no half-baked profundities, just good honest pop. Matey no. 2 did at one point highlight a gang-vox driven similarity to the Pigeon Detectives, which was a shame, and did break the magic ever so slightly, but that was nothing that a rendition of new single “Mumma” couldn’t solve (go buy). I’d like to have heard them make more use of the variety of good voices that they had on stage, rather than the perpetual chorus, but this lot are still in their relative youth as a band so there’s plenty more time for that.

If nothing else, they manage to have a drummer for a frontman and not make me feel queasy, which is an achievement. If you get chance, go see these guys – you’ll enjoy it, and what the fuck else do we go to gigs for? 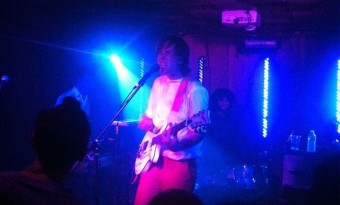 Like the skeletons from Funny Bones getting arseholed in the Carribean, Nick Thorburn's clan may sound chirpy but they have a heart of darkness...
Read More