Not the shit ones you probably like, good ones. Bold statement I know given we’ve only recently met, but you just have to trust me.

Suspiria (Dario Argento, 1977) is one of the greatest horror films of all time. Don’t argue, just watch it. It’s stunning. A shitstorm of balls-to-the-wall intensity and couldn’t-give-a-fuck narrative discord.

You’ll notice the soundtrack. Boy will you notice that soundtrack. It’s huge. It not so much hits you over the head, but punches you in the stomach and caresses your face as you go down. Quality treatment, you’ll agree.

I love this soundtrack. When you’re walking alone down a dark street and you feel something unseen shifting amongst the crisp packets filled with piss? That’s the black mess that’s leaked into this world via this soundtrack. Performed by a band called Goblin, it’s the kind of music that lines the ears like tar, catchy as hell and just as hot.

It’s this music that is about to clamber into my ears and take my brain for a nice stroll down a very dark alley this fine Sunday evening as I stand amongst the sweaty mass in Camden’s Electric Ballroom, readying myself for the powerful onslaught of the music that accompanied many of my favourite films.

Goblin, formed in Italy in 1972, scored numerous Argento films, most of which are rightly regarded as genre classics, their raging prog rock scores perfectly underpinning the images of carnage like a nicely lain picnic blanket.

Tonight’s gig is only Goblin’s third ever performance in the UK, so there is a palpable amount of excitement in the air. This being a prog gig, there is also quite a bit of long hair and beards in the air. This is not to be missed.

Lead by founding member and main songwriter Claudio Simonetti, the band have been through so many splits, line-up changes, splits, reformations, more splits and more reformations, that I shan’t get into now (see me after for more details). Tonight, with guitar, bass, drums and keys, the band will prove to be (as P.G Wodehouse might say) “tight as fuck”. 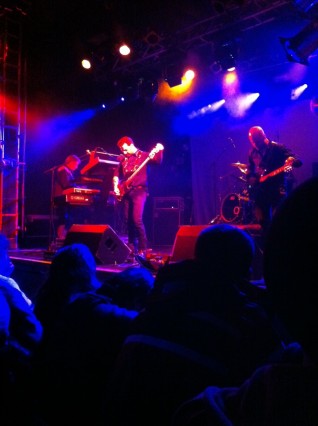 Simonetti, stood behind a mammoth tower of keyboards and synths, is their equivalent of Brian Wilson. Throughout the night he will pound away with glee, clearly still enamoured with the music he originally made decades ago.

‘Aquaman’ from the non-soundtrack album Roller provides an early highlight. Swooning guitar winds to-and-fro while bass and keys bubble along with a sloping funk, as if dirty mermen attracting unaware sailors to their doom. The drums crash down like great tides of the sea. From the carrion a guitar solo of almighty righteousness soars. Bill and Ted would be truly proud.

Horror hit after horror hit tear at the crowd with greasy fingers. The classic militaristic funk of ‘Zombi’ from George A. Romero’s unstoppable zombie epic Dawn of the Dead shuffles and prods for a place to rest its rotten teeth, all synth stabs and cop show basslines.

‘Tenebrae’, predictably taken from the film Tenebrae, is just fucking brilliant. Vocodered vocals, ferocious tribal drums and the biggest, danciest synths this side of The Roxy club circa 1981. So dancey is it that electronic pop duo Justice sampled it for their song ‘Phantom’. So there, kids. The band rock and groove as devil horns are flicked by the appreciative black-clad crowd.

The main theme from Suspiria – ‘Suspiria’ – is like being wrapped in a blanket of very itchy wool as a tickly witch whispers filthy profanities in your ear. A spine-tingling toy box tune jangles away, oblivious to your potential discomfort. Which is my idea of a good night out.

Someone screams for ‘Profundo Rosso’, and soon gets their wish (obvious really as it’s a hits set, patience would’ve sufficed to be honest). ‘Profundo Rosso’ has a main funereal organ melody which bores its way into your head, sits just behind your eyes, and makes itself comfortable while watching the band hammer through the gothic masterpiece in awe. The little piss-taking bastard. It’s still in there several days later. 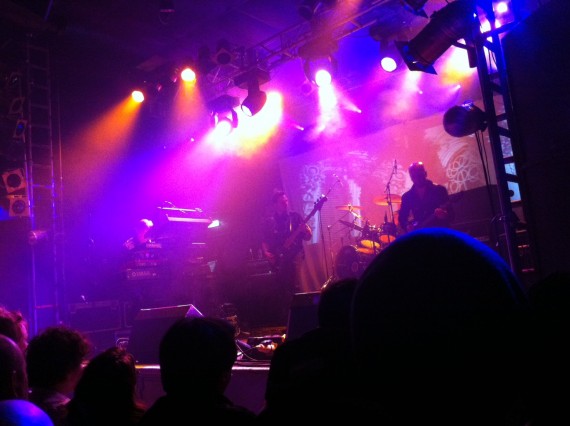 Every song is met as a classic, which to many they are. The songs from the aforementioned album Roller are my particular favourites, and it’s good to hear them peppered amongst the other horror-based treats such as the themes from Phenomena and Sleepless. We also get a track from the trippy concept album Il Fantastico Viaggio Del “Bagarozzo” Mark, an album which marked a rare foray into vocals for the band.

They finish with an encore of the theme from Demons (They played Demons! DEMONS!!!), which comes across as a possessed version of Herbie Hancock’s ‘Rockit’, and I’m in heaven. Or hell (well, Camden).

The final song is saved for the ridiculous glam stomp of ‘Zaratozom’ from Dawn of the Dead. It’s the sound of Dr. Who finally biting the dust and coming back as the undead to fuck up all the annoying side kicks he’s ever had the displeasure of dealing with.

Admittedly, like the ravenous undead Dr. Who’s lust for flesh, it all may be a bit of an acquired taste, but if you already have it on your lips then tonight is sheer bliss. Like having a holiday inside your favourite VHS tape, or joining the shuffling zombie masses to hunt down any useless bastards who are hiding in a wardrobe at home.

No, never wondered that? Oh well fuck you then, just me. And we were getting along so well…

Marijuana Deathsquads @ The Black Heart - A Review in Stereo 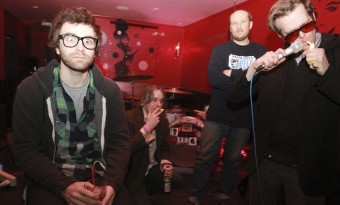 Why take one reviewer into the show with you when you can take two? We take a dual look at the mad world of Marijuana Deathsquads...
Read More