Much like Martin Scorsese, there’s an undercurrent throughout Jim Jarmusch’s directing career that basically consists of him showing off his record collection. Whether it’s casting Tom Waits in Down By Law, drafting in RZA to score the incredible Ghost Dog: The Way of The Samurai, or having Bill Murray drive around endlessly while listening to Holly Golightly and Mulatu Astatke in Broken Flowers, his work is generally as aurally pleasing as it is visually (indeed, the latter’s soundtrack was one of its few redeeming features).

So it’s no surprise that last night’s London premiere of his latest offering, Only Lovers Left Alive, was followed by a gig round the corner at Heaven featuring bands and musicians featured in the film, as well as a first UK performance from Jarmusch’s own band, SQÜRL. Premium space-rock purveyors White Hills were also on the bill, providing a guaranteed silver lining just in case the film turned out to be a big old cloud of crud.

Luckily, that wasn’t the case. I’ll leave the proper cinematic analysis to my companion for the evening, Mat Colegate (look out for his assessment on The Quietus soon), but suffice to say it’s the most enjoyable Jarmusch picture I’ve seen in years. For a quick synopsis, it’s basically a vampire flick written by the editorial staff of MOJO magazine – retro-fetishist vampires hiding away from the world with nothing but vintage guitars and Charlie Feathers’ 7″s for company.

While the constant cultural signifiers grow a little wearying (the bit where the lead couple stop to admire Jack White’s childhood home is particularly cringe-inducing), it’s an undeniably stylish and surprisingly warm-hearted film. While I sadly didn’t get to clumsily trip over Tilda Swinton on the red carpet (largely because there wasn’t one), big Jim was in the foyer looking effortlessly cool, although sadly not riding a bicycle while tooting his horn [/excuse to post following clip].

It goes without saying that the soundtrack is great, so our appetites are thoroughly whetted as we head to Heaven, where welcome shots of ‘blood’ are being handed out at the door. Sadly a pint ‘n’ pasty pit stop means we miss opener Jozef van Wissem, but are fortunately just in time for Lebanese musician Yasmine Hamdan.

While it’d be impossible for her to top her performance in the film, which takes place in a tiny bar in Tangiers, she delivers a set that’s heavy in atmosphere if light in variety. Each track starts with little more than Hamdan’s bewitching voice against gentle feedback, before gradually swelling into a crescendo that falls away just at the moment you think it’s going to peak. The problem, if it is a problem, is that every track pretty much follows this exact formula, while elements that contrast with the hypnotic drones tend to clash nastily (an overly loud cowbell being the worst offender).

Still, at its best Hamdan’s music is extremely seductive, and judging by the relative quietness of the crowd while she plays – a fucking miracle at London gigs these days – a fair few new fans will have fallen under her spell. In the film Tom Hiddleston hopes that she doesn’t become famous, as “she’s far too good for that”. He may have a point. Although perhaps Jarmusch shouldn’t have put her in his bloody film then, eh?

The main man himself then strolls onstage with the rest of SQÜRL, his distinctive grey plume turning into a fluffy pink cloud when caught in the stage lights. They begin in a similarly drone-doused style, settling into some pleasingly noisy rhythms that are enhanced by waves of feedback (and Heaven’s impressive sound). While successful people from other fields rarely manage to make music that stands up on its own merit, the first couple of tracks here genuinely do. 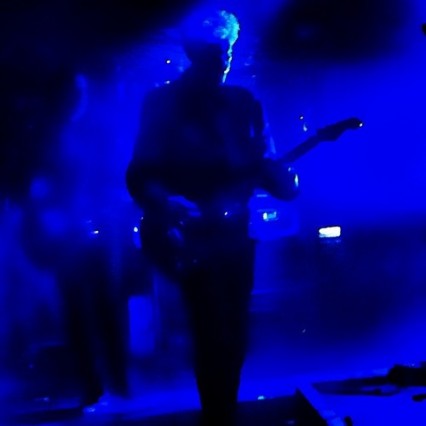 Sadly, the rest of the set doesn’t match them. Like fellow director-turned-musician David Lynch, Jarmusch buries a clear love of the blues beneath his music, but some other influences are more awkwardly shoehorned in. The nadir is a criminally bad Velvet Underground pastiche called ‘Francine’, dedicated to a French friend of the band, although if anyone dedicated this song to me I’d be personally affronted. Well, to be fair, if Jim Jarmusch did it I’d be pretty chuffed. Then affronted.

Still, when the director isn’t taking centre stage, SQÜRL knock out some appreciable noise, despite a lack of basslines to liven things up. Also, while Jarmusch may not be much of a singer (to put it mildly), he’s a decent guitarist and clearly enjoys throwing shapes with bandmates Shane Stoneback and Carter Logan. Let’s be fair if anyone’s earned the right to play rock star, it’s Jim Jarmusch, and for half the set he does an acceptable job.

Sadly the room completely clears at the end of the set, despite the tube strike meaning there can’t be any good reason to rush away. It’s the deserters’ loss, quite frankly, as they miss the opportunity to be ear-fucked into oblivion by New York noiseniks White Hills. They arrive on stage to the clatter of church bells and a shitload of dry ice, and proceed to launch into some gloriously sexy riffs.

I don’t normally mention what musicians wear onstage, but I’m now wondering whether that’s simply because most musicians don’t wear anything interesting. That’s certainly not the case here; bassist Ego Sensation (yup, really) sports a vivid red jacket with glittery lapels, while guitarist Dave W. is resplendent in silver trousers. Better yet, they sound as dazzling as they look. They don’t so much lock into grooves as much as put them in a vice and squeeze the bejeezus out of them, with Dave knocking out galaxy-questing guitar solos like it’s no big thing.

They know how to take it down a notch too, stretching time with drawn-out, head-melting tones that slowly reverberate around the room. They then kick things back up a few gears, giving the crowd a mighty psychedelic boot up the arse during a ferocious finish. The only downside being, well, that it is the finish. Half an hour has somehow passed by during less than a handful of tracks, all of which I’d have happily let go on for 30 minutes each. While the film earlier in the evening had been good, it would’ve been worth lopping the end off just to get a bit more White Hills.

Still, the warm, heady glow from their set keeps us inured against the soul-sapping drizzle that envelops us as we spill out into Central London. And, as always, everyone’s now very aware that Jim Jarmusch has a very good record collection. We look forward to him sharing it again. 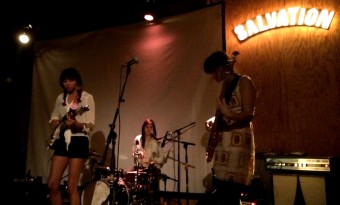 A surf rock band from Seattle? Surely some mistake? Not on this showing, as the charismatic four-piece take Los Angeles by storm...
Read More