This time last year Fat White Family were yet to really get going, still perfecting their brand of warped psych rock while finishing off debut album ‘Champagne Holocaust’, no doubt working out the best part of the show to take their tops off for (they eventually settled on: the start) and getting their spray cans ready to tag ‘Yuppies Out’ across estate agent windows. It’s to their credit that, less than twelve months since we first caught them, they’re now the band of the moment and can conduct club nights of the calibre we went to on Saturday. They might seem deranged and intent on destruction in interviews and onstage, but something tells us they’re actually a bunch of fully focused blokes who know just how to make everyone swoon in their direction.

Slide In is their long-running monthly night at the Queens Head, in between Stockwell and Brixton. It’s a regular pub: entrance leading to a central bar, smoking area to the right, toilets to the left, and a stage crammed into the right hand wall. Total capacity? 150. On Saturday it played host to an artist more used to magazine covers and headlining small festival stages (more on him later). We arrived on the dot for doors, 7pm, and half an hour later the place was sold out. Knowing there were four bands to get through, we got the first round of cider and Doombar in and prepared for a night with the Fat White Family and friends.

First on was Jerkcurb. With that sort of name I’ was expecting some snot-nosed slacker group, but instead Jacob Read cut a more intimate and romantic shape onstage, his melancholic folk guitar backed by a sparse drum machine/backing track, forming a middle ground between James Blake and Mac DeMarco. We were expecting our ears to be pummeled all night, so this made for a pretty smooth warm up.

With this being a South London night, the bands were all from below the Thames border. Childhood commanded the audience with their set, which has fully developed in sound and confidence over the past year and a bit. ‘Blue Velvet’ shimmered with romanticism, while recent single ‘Solemn Skies’ soared with youthful ecstasy. Where once they seemed to be trying to neatly fit in the shoegaze renaissance, now they use the sort of sound the likes of TOY have been sporting and wrap it around tight, heartening tracks, a la the late ’80s Manchester scene. They’re coming of age, and quickly.

The big draw of the night was Bermondsey wunderkind King Krule (who The Quietus’ John Doran recently described as looking like “a kid sat in the back of a Prius in the carpark of Barking Wetherspoons forlornly eating crisps”), who’s debut album ‘6 Feet Beneath The Moon’ has had critics drooling ever since its release. While tracks like ‘A Lizard State’ get into a real groove and have the crowd moving, and his voice and musicality is frighteningly good, the songs really lose their intricate grip live. You sort of want to tell him to stop trying to be so smart and get on with writing something I’ll actually remember the next day, but it’s likely he’s more interested in being in the next Polar Bear than satisfying ‘music journalist’ wankers, so I guess he’s winning (sort of). 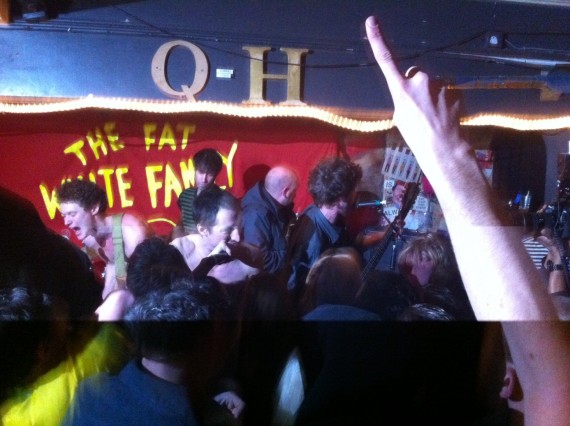 It was at this point a large part of the crowd dispersed, which was a little sad. And ignorant, because even if they’d quickly googled ‘Fat White Family live’ they would’ve realised they were in for a proper treat. The diehards stayed behind and were ready to pogo, and when ‘Auto Neutron’ grinded into view with the sort of anger reserved for angry football fans, it was welcomed with a singalong. If it sounds like they’re stoned on record, live they were, as ever, balls of hyperactive energy. Frontman Lias Saudi’s head moves so sporadically I’m pretty certain one day it’ll unscrew itself from his neck and fly across the Queens Head while ‘Bomb Disneyland’ sprawls, Captain Beefheart-like, throughout Brixton.

Brass is always welcome, and the guest trumpeter added a slight carnival atmosphere to proceedings. He did leave while trying to kick start a ‘yuppies out’ chant which didn’t quite catch on. It’s possible the Fat Whites’ audiences aren’t as hard-line in their thinking as the band themselves, and there is a point where being darlings of the music press and still banging on about poseurs will start to seem like a bit of an awkward contradiction. But Fat Whites are a band of odd bandits, hypocrites, social liberals and rock’n’rollers in a very traditional sense. The retrograde view of women in ‘Is It Raining In Your Mouth?’ is either meant to be ironic or a character piece. If it’s ironic it’s not very funny, and if it’s a character piece then that sort of calls into question the honesty of their views expressed in tracks such as the ace ‘Garden Of The Numb’, which will get crowds up and down the country singing, “You would sell your mother’s cunt to open doors” en masse.

In truth they could’ve been singing about daffodils and it wouldn’t have made much difference, as spilt beer, regurgitated red wine and sweat mixed on the floor of the pub to the sound of a band finding their strength and using it to put on proper myth-making shows. It’s felt like over the past few years Manchester, Birmingham and Bristol have been having all the fun, but finally the London scene has something of its own it can be proud of. Leave your irony and your scepticism at the door, and Slide In. 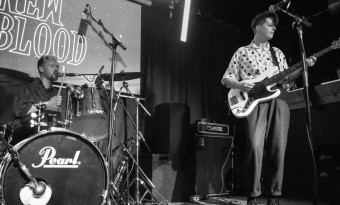 Shopping were top of the menu at Hoxton Square Bar & Kitchen for this leg of Artrocker's New Blood festival, and, unlike the actual menu, they didn't disappoint...
Read More