The problem with lyric videos is they’re only worth doing if, firstly, you can present them in an interesting way and, secondly, the lyrics are actually any good to start with. So we’re pleased to report that the new lyric video from Peckham’s Filthy Boy sees both boxes firmly ticked. Possibly in blood.

The most disturbing love song we’ve heard in some time, ‘In the Name of’ starts with the protagonist being royally battered for pursuing the object of his affections a little too creepily, although that does little to dampen his ardour. Describing a “love that knows no bounds” could be considered romantic, except it turns out that this is a love that knows no boundaries – other lines like, “no matter how hard you try, you’ll always have my pupils dilated in size,” take on a sinister edge when you realise just how hard the subject of the song is trying.

Just to dispel any lingering ambiguity, these words appear in the video scrawled in red over the walls of some pestilent hovel, revealed only by a sickly, flickering strobe. It’s a simple idea but one that’s effectively executed, although perhaps that shouldn’t come as a surprise seeing as the band’s frontman and bassist, twin brothers Paraic and Michael Morrissey, have previously directed videos for fellow South Londoner King Krule.

Musically, the track recalls the sort of surf ‘n’ rockabilly tinged indie once heartily dished out by the likes of The Brute Chorus, The More Assured and Vincent Vincent & The Villains – it’s almost like taking a time machine to 93 Feet East circa 2007. Fast, jerky and whammy-barred to the max, they’re a band you might just fall in love with; although judging by the lyrics, you probably wouldn’t want them to fall in love with you… 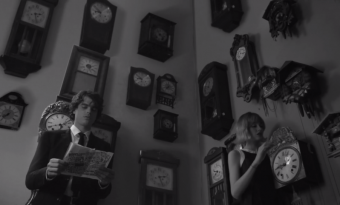