On a cold night in December, TOY gathered at the Brixton Academy in London for a festive gig supporting Placebo. But would the audience receive TOY this Christmas, or would it turn out to be a lump of coal? Thankfully eschewing my idea of simply filling the stage with coal and having done with it, TOY thought the audience had been good boys and girls and so did turn up – always the first sign of a good gig.

Is it possible to write a review of TOY without using the word ‘psychedelic’? No, it’s not. I’ve just failed, and I was trying. Their sound comes drenched in LSD-soaked noise, with the visuals all referencing that period in the ’70s when directors discovered colour filters and that weird bug vision thing that always happens when a character in a TV show gets high.

The set starts with ‘Conductor’, its psychedelic (I must look up the synonyms for this) planetarium-esque cascadence wordlessly introducing the band and lingering in the air, with the driving bassline giving the whole song a real sense of purpose. The crowd looks completely uninvolved to begin with, but then, in the middle of the song, the volume drops to nothing and the crowd applaud before it picks up again.

‘Motoring’ is the only song they play from their first album, and it stands out as a bit more fun and dancey than their newer fare – it’s the excitable psychedelic puppy next to the stoned psychedelic bear (no, turns out I don’t need synonyms) of ‘Join the Dots’.

A lot of bands that have more sonically layered albums go for a more pared down, minimalist approach when they play live, but TOY seem to have gone the other way, adding even more strange drones and ambient effects. A lot of the tracks seem extended from the album versions, with longer instrumentals and fuzzy static added. If you were being mean you could describe it as aloof or self-indulgent, but if you get into it they produce some very deep aural textures. ‘Endlessly’ and ‘You’re Too Far Gone to Know’ both go down well with the crowd.

For the final track they play ‘Join the Dots’, the title track and first single from their latest album. Again they manage to reproduce and even exceed the screeching howling noise from the album version during both post-chorus sections, eventually leaving without a word, guitars still pulsing feedback across the audience.

In summing up, I give the band a level 3 score – as defined by the levels of psychedelic experience in the Vault of Erowid: “Very obvious visuals, everything looks curved and warped, patterns and kaleidoscopes seen on walls and faces”. 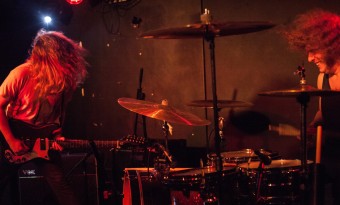 How's your hearing? Good? Then presumably you haven't been within 50 miles of this ear-bleedingly loud Midlands duo...
Read More