First of all, those of you with a squeamish disposition should probably avoid clicking play on Nate Connelly‘s new video above, as there’s a somewhat gory shot of a man’s mutilated face within the first few frames. In fact, you should probably avoid reading the next paragraph too, as the story of how the poor bastard’s bloodied chops got that way is even nastier.

For, as director Tim Porter explains in his backgrounder, the video’s narrative is based on the story of Rudy Eugene, aka ‘The Causeway Cannibal’, who last year stripped naked and attacked a 65-year-old homeless man and chewed off 75-80% of his face above the beard. Initial police speculation centered on the possibility that Eugene was high on the controversial legal high Bath Salts, although evidence that was the case remains inconclusive.

Nonetheless, the story was clearly enough to get Porter a bit jumpy: “The fact you could walk out of your house and be attacked by someone on Bath Salts is a thought that lingers in the back of your head for days, making you self-delusional and paranoid,” he explains. Well, thanks to the video for ‘You Echo’, we can all be self-delusional and paranoid with him. THANKS TIM.

However, it’s not simply a gore-fest. Porter changes the protagonist’s gender and intersperses the drug-related shots with everyday scenes, serving to show the effect certain legal highs can have on previously well-balanced people. Yet while he claims he didn’t intend to make an “anti-drug commercial”, I’m guessing most people who watch it won’t be logging straight onto Silk Road to stock up on designer drugs.

The video provides quite the contrast with Nate Connelly’s langourous track, which is a muted, James Blake-esque love song full of understated warmth and gentle swells, albeit with a skittering percussive rattle in the background. If anything, its loveliness only makes the final scene more shocking.

It’s a memorable accompaniment to a quality track that bodes well for Connelly’s forthcoming album, A Dream About Being Lost, which comes out just before Christmas on Blind Colour. Although if you think the video’s a bit much, just be grateful Porter wasn’t inspired by the other legal high related atrocity he mentions instead, which involved some poor twat on M-Cat who cut open his scrotum believing it was full of centipedes. Yeesh. Don’t do drugs, kids!

ALB's 'Whispers' - the most innovative music video yet? 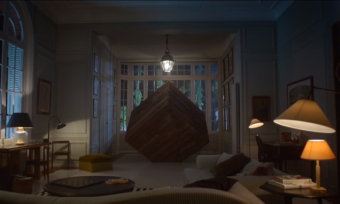 A scarily inventive video that doesn't break the fourth wall so much as positively obliterate it. Warning: may cause your significant other to leave you...
Read More