Awash with summer euphoria, Scattered Into Light offers luscious dream-pop muddled with ornate, glitchy samples. By and large it’s the same dusty, sunny sound-haze that Luxembourg-based producer Victor Ferreira has always made, a natural extension of previous work. It offers few new talking points, either for Sun Glitters or the sun-stained genre as a whole. But it’s a sound that you can’t help be attracted to, in the same way that nobody (worth knowing) dislikes the sun.

The most noticeable adjustment is the addition of a prevalent and consistent female vocalist. Previously, Ferreira created now bassy, now-high-pitched vocals out of what appeared to be his own distorted voice; here he opts for the crooning of a real life girl. Sara Cappai sings on over half the tracks, with a voice ranging from barely coherent hums to lucid calls. Her voice is beautiful, but Ferreira’s altered vocals on 2011’s Everything Could Be Fine created a release that transcended the boundaries of R&B, dubstep and electronica, distinguishing Sun Glitters despite coming at a time when other similarly dreamy glitch-pop was being produced.

‘When The Train Comes’ makes a worthy opener to the album: the rumble of sound thickets surround Cappai’s vocals, which are debuted in a haze of excellence. Her ghostly sound perfectly fits this track, with the pleasant whole slipping effortlessly into ‘Soft Breeze’.

On ‘Closer To The Sun’ – the first single to be released from Scattered Into Light – the range of Cappai’s vocals is highlighted. It becomes the focal point of the track, but it’s arguable as to whether this works for Sun Glitters’ sound. Sometimes her voice bubbles in shiny froth, mumbling just over sliding rumbles and gentle fizzes, and it seems that this is where vocals belong in Sun Glitters. When her voice is in that exact place, the effect is stunning. But I’m in two minds about the song, because when singing the words “closer to the sun”, her voice sounds unnatural projecting above the surface of the track. It doesn’t fit, and hurts the flow of the trance-like state Sun Glitters’ songs at their best can induce.

The first minute of title track ‘Scattered Into Light’ begins in a blur of opulence, but when the vocals are unleashed it becomes unbalanced: the pitch is slightly too high and even a little grating. In contrast, the underlying chop-switch-repeat vocal samples are perfect, distorted for added eeriness. The last minute of the track deconstructs into deliciously slow playtime, showing off Ferreira’s musical dexterity: you can almost see him bending over his equipment to piece together bliss-outs.

But in ‘Only You’, the placement of Cappai’s vocals are again slightly but noticeably out of kilter with the vibe of the track as a whole. I feel like music such as that by Sun Glitters is supposed to put you in a kind of sway-trance, never letting you notice anything too specific. The melted lustre of Elizabeth Fraser’s voice in the context of Cocteau Twins is the real, if over-touted, benchmark for vocal integration in a track; I find the placement, style and depth of the vocals on Scattered Into Light misses the mark most of the time.

Along with ‘When The Train Comes’, ‘And The Sun Goes Down’ is a great track for vocals. Cappai’s voice, at low pitch, hosts a deeply eerie sheen, while ‘Too Much to Lose (acoustic)’ offers an interestingly direct point of comparison between Scattered Into Light and Everything Could Be Fine. Considering I’ve made a good show of seeming obsessed with Everything Could Be Fine, you might expect me to slam this acoustic version. But I think it’s excellent. The vocals are clear but work in this setting, and the entire track is an interesting sidestep from the rest of the album: it acts as an appetiser for a Ferreira soundfeast I wish would happen.

I guess the funny thing about all of my pernickety chit-chat about vocal integration and any lack of exploration is that it doesn’t matter an inch. When Ferreira is doing the summer festival circuit and finds himself in Barcelona (if he’s not on the Primavera line-up I’ll be really surprised), we’ll all be swaying and looking up at big white fluff dancing on a purple sky, thinking, this is fucking great.

The Leg - Oozing A Crepuscular Light 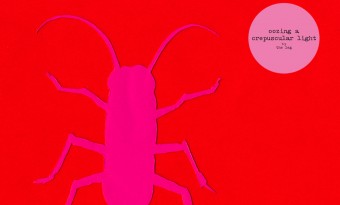