With an intimidating back catalogue and array of experimental rock affiliations, Magik Markers have defined themselves as prolific noise artists, with a vast legacy to live up to. A milestone record, Surrender to the Fantasy pairs Elisa Ambrogio’s famously wild spirit and Pete Nolan’s stormy drummery with previously unseen deliberation and subtle, precise production.

It’s surprisingly gentle and meditative on first listen. It feels weird to define the yielding to melodiousness as a sign of progression or maturity, because it’s like Magik Markers are beyond that kind of concept (by that I mean a temporal narrative) in their creative efforts. But all the same, it’s definitely an evolution of sorts. I Trust My Guitar, Etc., released in 2005, made its entry into the hall of noise with a spitting, bewitching, torn-edge energy: a furiously low-production attempt to channel the live experience into a record. Halfway through ‘The Most Beautiful City On Earth’ you can hear quite distinctly in the undulations of Elisa’s voice that she’s hella jumping around.

The next milestone was 2007’s Boss, which displayed a more structured tone and increased diversity of style. Both albums were released on Thurston Moore’s Ecstatic Peace label, while Boss was produced by Lee Ranaldo – it feels in a way like they had guidance in making milestones of both of these records. In contrast, Surrender to the Fantasy, released on Drag City records and with John Shaw on bass, is the result of four years of deliberation, reworking and creativity: almost the antithesis to the live recording and rapid CD-R and cassette output of former years.

Opener ‘Crebs’ is kind of a surprise. It’s got quite a kaleidoscopic feel reminiscent of the hazy summer noise of A Sunny Day in Glasgow. It slips effortlessly and gradually into delicious fuzzy reverb; but this doesn’t last for long before the twang of ‘Acts of Desperation’ sets in, accessing the filmy nostalgia of dusty deserts stretching out all around, in a poster ad for the American Dream.

The ratio of noise to melody throughout the album is perfectly balanced, and shows a consideration heretofore unseen in the band. There’s always been tension between Magik Markers’ desire to capture their wild live essence on record and the idea that by definition they can never truly achieve that, even through live recordings. There’s a visual element that needs to be expressed, and the band remain faithful to this idea outside of the album: ‘Acts of Desperation’ performed live (see above) is a berserk distortion fest. It creates a symbiotic relationship between Magik Markers’ music and their live presence: they seem to have reached a state of understanding that ensures they can create tuneful songs without feeling as though they’ve abandoned their unique live spirit.

‘Bonfire’ channels the spirit of ragged edged tribe-surf (whatever that is) and, beyond its individual merits, its placement between the dusky vibes of ‘Acts of Desperation’ and ‘Mirrorless’ acts as a palate cleanser – it would be hard to distinctly appraise the two songs if they were right next to each other. It also functions as a scuzz version of theatrical comic relief (rock relief, maybe? that sounds shit though) and a warm-up to ‘American Sphinx Face’.

This is the nucleus of the album, displaying not only the thought evident in each track, but expressing everything Magik Markers are and have ever been. The feedback is wild and improvised and yet, without wanting to make it sound tame, also shaped and crafted. The manipulation of guitar feedback is performed at a Jimi Hendrix level of genius; it’s pure noise art splashing around everywhere. Elisa’s drone sounds a lot like Kim Gordon, and the lyrics are anti-poetic and sound way cool, all lazy over the feedback, ‘I don’t know… Lilies, lilies”. It’s near perfect, and gives some kind of indication as to the future of the band and its members. In an interview with Spin, Pete Nolan said of Elisa:

“… you’re going to write the Great American Novel. I think this [American Sphinx Face] is a step in the right direction.”

In the opening of the next song, ‘Young’, there’s almost a touch of The Smiths in the way Elisa sings the first few words of the line, ‘the worst part about being young’. As a track it’s slow and reflective, like a pared back ‘Empty Bottles’. Its low-key tone feeds through into ‘Empire Building’, a sparse and tense track that simmers under the surface and displays disciplined feedback, showing just as much potential force leashed than in a balls out display of noise – you wouldn’t doubt the power of a bear just because it was in a cage.

The album closes with the dreamy fuzz of ‘Screams of Birds and Girls’ and ‘WT’. The latter feels superfluous and a bit weak compared to the rest of the album, as though it’s been tacked on for a bit more noise factor. That’s cool, but it does reveal a lapse in deliberation over the shaping of the record, because the album would have closed much more naturally with ‘Screams of Birds and Girls’. It’s a good bit of improvised noise for hardcore fans nostalgic for the loud CD-R days though.

Overall, the album doesn’t feature the richness sometimes present in Boss or the mouth-frothing frenzy of I Trust My Guitar, Etc. – instead it focuses on delicately channelling frenzy to heighten feeling and create a mood around each track, and exploring the subtleties of noise while showing an appreciation of melody and deft production. It’s a really awesome album for the large part, and proves itself thoroughly deserving of its four year gestation period. 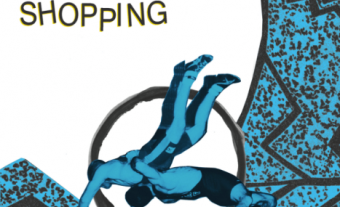 One of London's best new bands park their trolley between aisles '78 and '83, and gleefully loot the post-punk shelves...
Read More