Collections of EPs don’t always make for the most satisfying dish when they’re mashed together into a full-length. Considering one of the EPs compiled here by Portland, Oregon’s premier psych-rockers Grails was actually released before their last proper album, while the tracks on volume 6 have never even seen the light of day, you’d be forgiven for not having high hopes for this release. Or at least, you’d be forgiven if it wasn’t Grails.

While its format means that it doesn’t take you on the kaleidoscopic yet coherent voyage that, say, Burning Off Impurities or Take Refuge In Clean Living embarked upon, there’s still plenty to get your teeth stuck into. Although they’re likely to simply get stuck in the viscous slurry of opening track ‘I Want A New Drug’, a dark bastardisation of ‘Nobody Knows The Trouble I’ve Seen’. Apparently Grails’ ideal new drug would be a syringe full of melted down gospel records. Whatever floats your boat, guys.

What floats our boat is ‘Self-Hypnosis’; the song rather than the act, although it’d probably be an effective musical catalyst for anyone planning to experiment with mirrors and pendulums. The main riff would make an excellently swaggering walk-on track for a boxer who’s just mysteriously emerged from the desert, although on the flip-side any boxer who chose this as their walk-on music would presumably be so stoned that a knockout after 30 seconds would be a distinct possibility. In which the case the dusty, drifting last few minutes of the track would be the sound of a blissfully pulverised brain slowly switching off.

The first previously unreleased track, ‘Invitation To Ruin’, is one of their most interesting creations in an age, simply because it doesn’t sound like Grails in the slightest (it’s more akin to drummer Emil Amos’ Lilacs & Champagne side-project). The busted tape guitar lines sound even more warped and shadowy than those on Bibio’s Handcranked album, while the beat wouldn’t sound out of place on Jeremiah Jae & Oliver the 2nd’s western themed Rawhyde mixtape. It’s a woozy, faded delight.

Going straight from that into the stoner rock of ‘Wake Up Drill’ naturally feels a little bit jarring, not least due to a mighty riff that grabs you by the shoulders and shakes you so hard spit starts flying out of your mouth. Then all of a sudden everything floats down; falling feathers inter-cut with slide guitars, almost falling into William Sheller’s ‘Introit’ at times but instead being carried somewhere else entirely. Mmmmm.

Yet while some songs here take you into uncharted territory, ‘Up All Night’ and ‘Pale Purple Blues’ feel more like endlessly circumnavigating Spaghetti Junction. Sure it’s all very impressive in terms of technical engineering, but eventually you realise you’re staring out the window at the same things again and again. Fortunately, by the time you reach ‘Chariots’ you’ve left the junction far behind and are revelling in refreshing isolation on an empty road, most likely in some sort of horse-drawn wagon.

‘A Mansion Has Many Rooms’ feels even more like a western soundtrack, a heroic final theme tinged with sadness. The great thing about Grails at their best is that, while so many similar bands rely almost wholly on atmosphere, sonics and stamina, they have the songwriting chops to throw in an amazing chord sequence every now and again too, and this is a good example of that. Unfortunately, ‘Corridors Of Power III’ is the other side of that coin. Expansive, yes, but meandering. Atmospheric, yes, but hiding a hollow centre.

The record is wrapped up by the arid apocalyptic folk of ‘Ice Station Zebra’ and ‘Penalty Box’, with the latter’s super-SloMo beat overlayed with an assortment of whirrs, drones, sweeps, blasts and chimes. Basically it sounds like the rest of the record being slowly crushed.

As it is, it doesn’t need crushing, just filtering. There are no problems with the musicianship; Emil Amos’ drumming is perfectly measured throughout (not surprising for someone who also picks up sticks for drone kings OM), Alex Hall’s guitar playing ranges from delicate to monolithic, while pianist Bill Slater takes centre stage on the melancholic ‘Up All Night’. Yet there’s the nagging suspicion that they might have been better off just taking the best from each Black Tar Prophecy volume and making an excellent album, rather than chucking everything on and making an overloaded one. Does using a bunch of new tracks here indicate, perhaps, that they’re saving even better material for their next proper album? That’s a prophecy we’ll be hoping comes true… 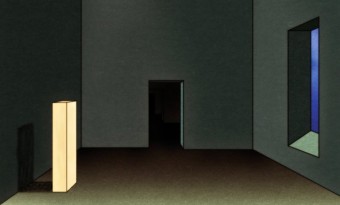