In the grand scheme of things, the machinations of the meat industry aren’t particularly funky. Yet in the hands of occasional The Knife collaborator Jenny Wilson, the least Swedish-sounding Swede around, everything from vacuum-packed chicken to factory farmed pigs suddenly become as funky as fuck. I’ve never intentionally eaten meat in my life (apart from one unfortunate incident with a box of own-brand mini scotch eggs – how was I to know that horrible gristly texture was actual gristle?) and am usually reasonably repulsed by the sight of it, but when the images are set in time to the pounding 4/4 beat of Wilson’s ‘The Future’ I just can’t tear my eyes away.

Wilson is clearly a woman on a mission here, as her motley team of protesters clamber over gates to the sound of the song’s strident rhythms, while shots of crowding commuters are juxtaposed with images of animals being led to the slaughter. Later we see loaded shopping bags cut with footage of rubbish tips, and people cramming burgers into their mouths while animal carcasses swing past on hooks. Yet while the message is somewhat sledgehammered home, you can’t help but feel your blood boiling as you wonder where you can join Wilson’s anarchic legion, projecting abbatoir footage onto buildings from speeding cars. Not least because their synchronised marching, handclaps and posing looks so damn cool. “Leave the old traditions!”, Wilson cries, “a change is coming”! Hell yeah, Jenny! Although don’t change the track…

ADDITIONAL! Just stumbled across Wilson’s introduction to her forthcoming Demand The Impossible album, and it’s well worth a read:

“Be realistic, demand the impossible!” was a graffiti painted by the 1968’s student radicals over a Paris wall during the uprisings.

I love this beautiful and noisy expression. It makes total sense – what else can one do when you’re a citizen in a society that’s fucked up? Go out and demand the impossible!

For me the tumults and the revolutionary currents during the last years, has been synonymous with what has happened in my own body. I had breast cancer three years ago. My body became a society in disorder. I had to rise, had to fight, had to start a rebellion against it. I’m the citizen, my body is the society, yeah, and I had to demand the impossible!

With the lust for life and a exultant anger in me, I wrote and produced this album. It’s a homage to the riot, to the survival, to the fight.

DEMAND THE IMPOSSIBLE! is a boiling soup, with a kick-down-the-fence approach.

You hear the street prophet, the beggar, the sufferings of all times. It’s juicy, it’s rhythmic and with no speed limits.

I’ve never done a greater record. Never written poetry with a sharper pen before. I had no choice.

Me, the pauper
Need no paper
No authors
I proclaim!
I’m the poet!
The opposer!
The magician!
The politician!
Good ideas comes out in limited edition
So listen
This is a testimony
(from University of my Soul) 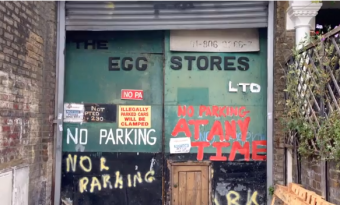 Ever seen a man turn into an egg? Or the streets of Stoke Newington in reverse? You have now, thanks to this feisty Cold Pumas-related lot...
Read More