Happy end of the week everyone! It’s been fun hasn’t it? It has. While David Cameron was planning to bomb the shit out of an already impoverished land, everyone else was watching the VMA’s and asking: “can’t we just bomb that instead?”

First up, Reading & Leeds came around this weekend. Much like the acne on the faces of its punters, it turns up once every summer reminding everyone IT WILL NEVER DIE no matter quite how much squeezing and anti-spot cream you put on, or how many festivals like Beacons, Primavera and Festival No. 6 pop up to deliver decent events where people don’t piss on your tent. Word of mouth reports from the live line up announcement, which took place in Leeds last April with Melvin Benn at the helm, saw a room full of journalists fall awkwardly silent as said elderly executive tried to excitedly announce: “the headliner for the Radio 1/NME tent is… Skrillex!”

We didn’t go anywhere near Reading this weekend (I went to Notting Hill Carnival for an hour, which in a way was almost worse) but from the TV it looked the same as ever. Indeed, anyone over the age of thirty must be confused as to why they’re showing repeat footage of the event they went to when they were 18, as the line up is seemingly identical. Except every so often they slip in knobheads like Frank Turner, who was introduced to the stage by his mum. Hedonism, by Waitrose Essentials.

What joins the dots between the Twist, the Hustle and Twerking? They’re all dance moves that’ve been exploited by evil marketing men in order to get people to think that there’s nothing better than organised fun. Wrong: there’s nothing worse than organised fun. Last year’s ‘Gangnam Style’ and ‘Harlem Shake’ YouTube wankfests were about as much as I could handle in terms of mindless twats incessantly cavorting for their own amusement, but apparently getting people to like a song because it’s got a funny dance move attached to it is about as much as we can expect from mainstream pop music in 2013. Whatever happened to that Spice Girls reunion? Geri, come back! I’d genuinely prefer ‘Wannabe’ over any of this crap.

In case you don’t know, ‘twerking’ is the process of girls bending over and shaking their arses vigorously, often against male genitalia. Like Miley Cirus did to walking male genital Robin Thicke at this year’s VMAs. Apparently it’s OK though, because despite it seeming like a dance move you’d pay a girl to pull off in Spearmint Rhino, and the fact it’s been made most famous by a girl doing it to a guy who’s most famous for paying girls to take their clothes off in order for him to get loadsa YouTube hits, ‘twerking’ is ‘just’ a dance move.

Actually, the most interesting piece on the topic of whether it’s got more to do with racial stereotyping than sexism can be found here, although expect to see a twerking piece pitched somewhere between ‘ludicrous rant’ and ‘anthropologically useful critique’ on The Monitors soon. Major Lazer head honcho Diplo is attempting to muscle in on the action too, by attempting to break the record for the most amount of people twerking at any one time this weekend. Diplo appropriating black culture wholesale for his own ends, you say? The world’s gone mad.

Anyway, before we leave Cyrus’s arse this week, something from Wikipedia about the inaugural VMAs in 1984: “Herbie Hancock wins the most awards with five, and The Cars take the highest prize of Video Of The Year for “You Might Think”. Much attention is garnered by Madonna’s controversial performance of her hit single “Like a Virgin” in which she rolls around on the stage, revealing lacy stockings and garters, and grinds her crotch against her veil”.

Not sure what’s more depressing: the fact that we literally haven’t moved on one iota in thirty years, or the fact that something this spectacularly terrifying would never come close to winning even one VMA award these days, let alone five…

One man who gave the music, TV and film industries a much more intelligent battering than me this week was Kevin Spacey. His talk at this year’s Edinburgh International Television Festival focused on how his show House of Cards was commissioned by Netflix without them seeing a pilot, how the whole series was released all at once, and how he’s enjoying quite a bit of success with it. Because more and more people are signing up to Netflix, the fact it never turned up on BBC or Sky doesn’t really matter, and people didn’t feel the need to pirate it either. He said this about the modern day consumer: “Through this form of distribution we learnt the lessons that the music industry didn’t learn, give people what they want, when they want it, in the form they want it in and at a reasonable price” (that last part obviously key here).

The show pre-dated Ben Wheatley’s multi-format release of his recent film A Field In England, which was shown on TV, in cinemas and released on DVD all on the same day (apparently it was a big success too). Thinking about it, it’s a little odd that albums are streamed fully on websites before they’re released, with labels expecting keener listeners to hold on and wait for the proper release date when they could just click one of the multiple SoundCloud or YouTube-ripping plug ins. Stop teasing the audience with streams Music Industry, you might actually make some money… 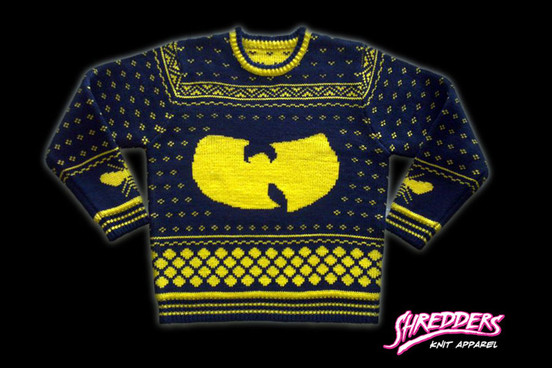 From an industry in crisis to an industry I didn’t know existed anymore: knitwear! And what better way to celebrate the oncoming sleet, rain and freezing temperatures than to don yourself with a Wu-Tang Clan jumper. If that’s not the best Christmas present you could hope for, then I don’t know what is. You can buy it now from Shredders Knit Apparel for around £50. Although they’ve missed a trick not calling it ‘Shame on a Knitta’…

Now some news from the rubbish world of indie. MJ from Hookworms has to be one of the angriest young men in music, and while many of his points are agreeable, you do get the sense he just loves a good old-fashioned rant. Can’t imagine what that’s like…

Anyway, he deleted a tweet which criticised a review of Beacons Festival on The Fly [not a patch on our own, I might add – Ed.] for stating Hookworms ‘didn’t look like a band’. It does raise the question: does it matter what bands look like? It doesn’t really matter for a psych band like Hookworms, whose music is a sort of veil anyway, but it would be quite hard to imagine The Ramones without the hair, or even Bowie without his elaborate wardrobe. Anyway, rant on MJ! You angry, angry man. 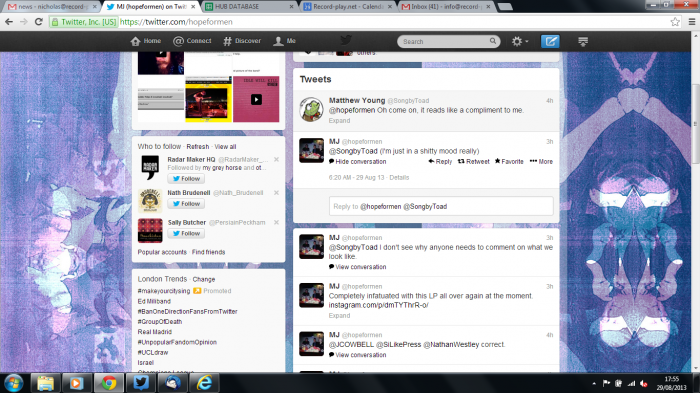 Spotted:
* A girl on creepy ‘dating’ app Tinder using a photo of her with one of Palma Violets at this years NME awards. To garner credibility points we’re guessing, although it’d be better if she was happy-slapping them.
* Deptford Goth, in a pub in South London, every week. 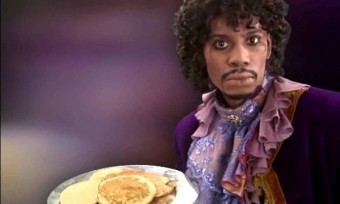