The best way to make a festival seem really organised is to have some really disorganised punters. As I eventually made my way to Skipton on Friday, after being late for my train and realising I’d forgotten to pack my sleeping bag (it’d been a long week, alright), Beacons Festival event could’ve had queues that went on for hours and campsites full of warm cow pats and it’d have seemed better prepared than my commute. After kicking myself numerous times I eventually made it to Yorkshire right in time for some sunshine and music.

After having to cancel the debut event outright in 2011 due to flooding, the team (who also put on Live At Leeds) managed to avoid the wrath of the heaven’s in 2012, which was enough of a success to bring them back for round two proper this year. What the event lacked in big headline pulls it made up for in a sustained approach to curation; from the daily musical kick off at 4pm the staggered and varied set times kept you plenty busy (luckily it doesn’t take much longer than fifteen minutes to get from one side of the site to the other). The mixed age crowd also managed to put a stop to the sort of student-y vibe which makes people hate events such as V Festival. Instead, everyone enjoyed enough ales to give it a similar sort of party atmosphere to Bestival. 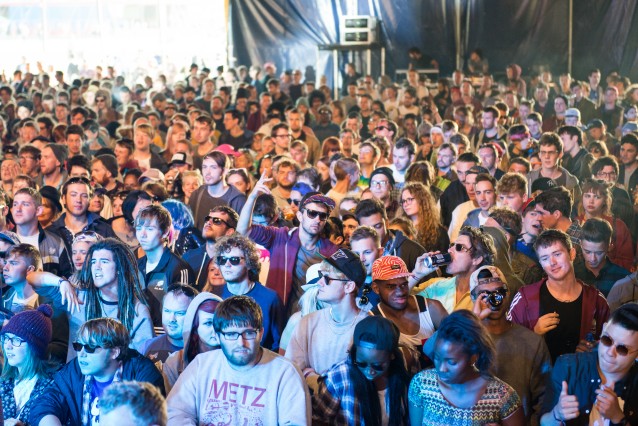 So what better way to kick off a weekend in the North by watching a bloke from, er, London? There are probably a few, but we gave Only Real a scout out anyway. His full band set-up gives his gigs a lot more of an organic vibe than his recordings do, which made him more entertaining than I was expecting. He does that Jamie T talking-but-rapping sortof thing which seems to have been made popular again by King Krule, and he does it in almost exactly the same vocal tone as King Krule. I actually quite enjoyed the set, but I wish people would stop wearing those fucking snapback caps.

Vondelpark took to the stage twenty minutes too late to fulfil their full assigned hour, although it seems that having to reshuffle their set around actually benefits the group. They fit neatly into the blissed out, R&B-tinged electronica scene which seems to be the hipster genre of choice over the past couple of years. The vocal and harmony-led moments are certainly the most interesting parts to their set, largely because it gives your ear something to focus on. I do get the distinct feeling that I’d heard a lot of this before though; and also that I’m set to hear it again very soon. I’m aware that’s what a ‘scene’ is, but when a scene isn’t dedicated to producing any particular, stand-out tunes, I sort of wonder why they don’t get together and just make one long track.

Ghostpoet then takes to the main stage. The bass starts throbbing, the isolation-obsessed lyrics kick in, and the music develops a real charisma which I struggle to hear when listening to his records. Anyhow, after showcasing tracks from his recent album Some Say I So I Say Light (which I’m definitely going to be revisiting now) he plows straight into crowd favourite ‘Liiines’ and big ‘hands in the air’ moment ‘Cash And Carry Me Home’. The chorus hook – “I’ve had a couple of drinks, just a little bit / I’m begging you just carry me home” – slowly becomes an anti-festival festival anthem. Headlining the night was Bonobo. I’d review it but to be honest I couldn’t really hear it (I checked and I was definitely not the only person to have this problem).

Rising Manchester stars Kult Country, who grew from the same scene which recently spawned MONEY, opened Saturday afternoon with heavy vibes, all moody basslines and an additional singular drummer upfront. They definitely don’t disappoint if shoegaze is your sort of thing. 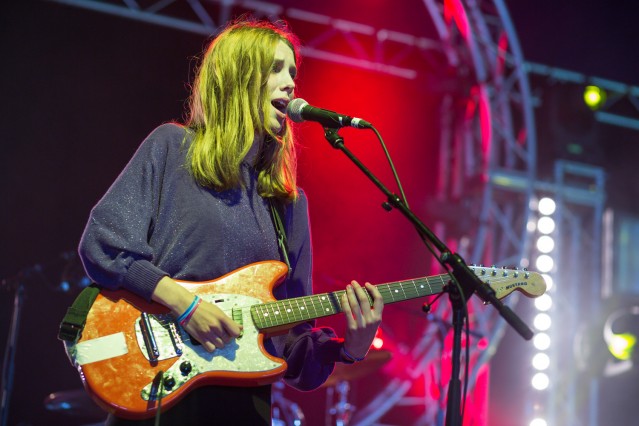 One band which seems to definitely be going places is Wolf Alice. They hit straight down the middle of the festival’s musical remit, but that was more of a welcome relief than an itch. Having added quite a bit of weight to their sound since we first saw them a few months ago, they’ve definitely developed some confidence on stage too (a bit of between song banter wouldn’t hurt though). Recent single ‘She’ shined as a set highlight – big blustering drums and guitars combining with a distinctive vocal line. ‘Bros’, with its childhood innocence and bright riff, also marks them out as the band most likely to enjoy a bit of a mainstream crossover over the next couple of years.

From something which sounds very now to two bands who sound about fifty years old. Temples were first to follow Wolf Alice, all dressed in their skintight trousers and pristine, buttoned up suits. The set wanes a little when they stop throwing as many memorable punches, yet while their look may be static, songs such as the dreamy, Zombies-aping ‘Shelter Song’ is anything but.

Mates of that lot, and one of the buzziest bands around (they’ve picked up the same management as The Horrors with zero releases to their name), are Telegram. Anticipation was high, and it was partly met. As with Temples, they channel their ’60s influences without even a hint of anything more recent coming into sight. The energy of the mustachioed guitarist has to be commended, although the weird vocoder on the lead vocals made the songs all sound a little too similar. I love ’60s R&B as much as the next man (which is all of them I think), but there is a fine line between The Strypes and a band who aren’t a joke. These two are going to have to be careful they don’t disappear too far down into their 45s collection. 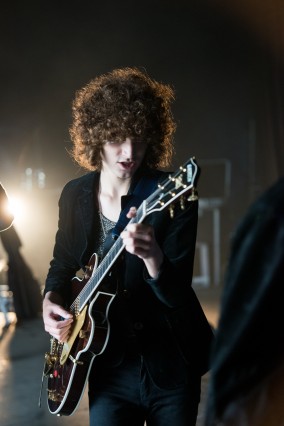 We then heard through the grapevine that Ben Wheatley and Shane Meadows were doing a joint Q&A over in the cinema tent. Of course, everyone else had heard this too and the crowd was bursting the tent (according to the website this was never an actual thing though, damn rumours). It was in this ‘other space’ that the more arty side of things was happening, with weird fancy dress monsters dancing in small bars and animations being projected onto the wall. It’d be nice to see this integrated a little better into the music arena. In fact, it’ll be cool to see this side of things expand in future full stop.

Saturday night was party night, and I was surrounded by Scousers so obviously partying is what I went and did. Luckily Gold Panda was on hand to soundtrack the shenanigans. New album in tow, the Chelmsford-via-Peckham producer has enough big tunes to turn the previously dry crowd into a head-nodding collective; I think I even saw some leg and hip movement at some point, the naughty beggars. Taking to the decks late into the night was Ben UFO (great big grooves) and Machinedrum, whose scatty use of rhythms was reminiscent of free parties in Devon. They actually made it quite difficult to continue dancing though, which seemed to be a bit pointless as I was in a dance tent for a reason. 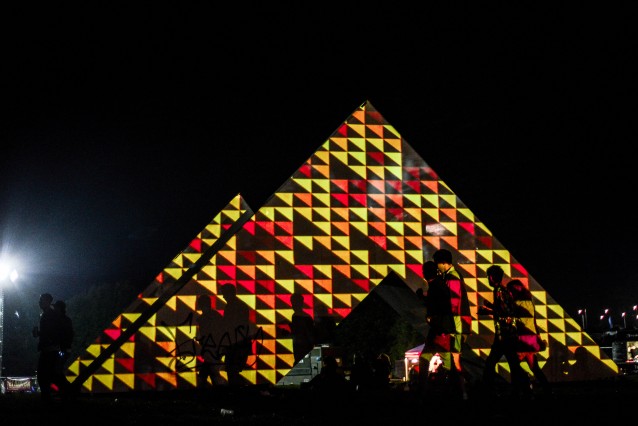 By Sunday morning we’d hit traditional No Man’s Land territory, especially as I’d had to sleep in all my clothes to keep warm (not taking a sleeping bag is the worst and my mate Josh didn’t fancy spooning). Local heroes Sky Larkin were first on the main stage, previewing an upcoming album due for release on Wichita. The three piece’s clean but loud approach to rock is reminiscent of The Joy Formidable and Now, Now, and when they break into a solid groove it really works. Kate Harkin’s voice is especially pleasing, but the ends of the songs don’t always resemble endings; whereas Wolf Alice have thorough lines and hooks, Larkin get a bit flabby round the waist.

“Stand there and laugh while my dignity collapses” screeches Wytches frontman Kristian Bell on the band’s standout track. The Brighton three piece (who apparently also have a secret fourth member back in their hometown) bring back the spirit of Nirvana, with all of the anger but replace the self loathing with sexual fustration and psychotic images of “graveyard girl’s spinning round like a pendulum”. If you’ve read The Monitors before you know we don’t need to tell you how good this band is again, really. 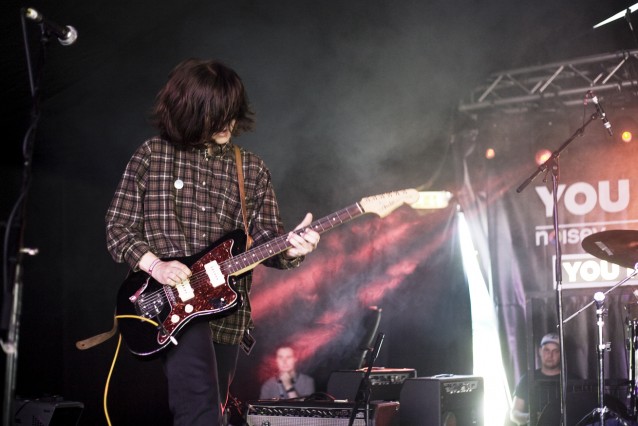 The Wytches by Christopher Bethel

Next, another ‘local hero’ band with a noticeable front person: Hookworms. The Twitter and rant-friendly MJ is certainly a fun character to watch, even at 2pm while suffering from a bout of festival tiredness, aggressively attacking his synth and the other onstage microphone like he despises them. In contrast, his bandmates decide on the musical statues approach. The strobe-friendly light show and booming volume make their kraut-induced psych rock hard to digest but definitely worth chewing over. I sort of wished this had been on about twelve hours earlier than it actually was, so all its barmy, doom/euphoria glory could’ve really shone in the dark.

It was at this point I realised I was going to have to miss the Sunday night’s festivities in order to get back to work on time (or at all) on Monday (my editor’s a man whose discipline and focus is a great source of inspiration to me). As I understand it, Django Django and the rest saw the weekend off in suitable fashion.

I left Beacons knowing I was leaving a place where everyone starts off every conversation with a friendly “hiiyyaaaaa” and was on my way back to London where people would likely step over your dead body, and nick the Oyster from your pocket while they were at it. While the event wasn’t totally groundbreaking, it’s the people who made it. You can keep your £230 tickets and your Rolling Stones, I’d rather be at Beacons with a good dose of new music and a community crowd to boot. Just remember to pack your sleeping bag. 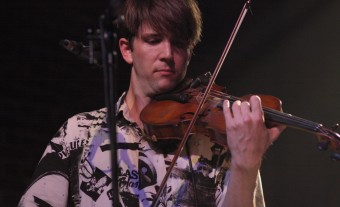 The virtuoso violinist operates in a more crowded field these days - can he still cut the mustard?
Read More