We’ve been following Hampshire-born Berliner Seams, aka James Welch, ever since we fell in love with his ‘Tourist’ and ‘Sleeper’ EPs last year.  So we’re pretty happy to hear some new material from him, even happier that it’s such a delicious serving of fizzy techno, and outright delighted that it’s been given such a clinically lush video.

Frantic polygons whirl around, while circles pulse in time against a backdrop of beautiful black and white images (and, for some reason, footage of a bloke holding a range of implements from a ping pong bat to chopsticks). It’s an immaculately designed promo, and the monochrome scheme gives it a clear, crisp feel. With a debut album on the way next month, as well as a choice Jon Hopkins support slot at KOKO, his calender must be bursting at the…nah, we won’t go there. 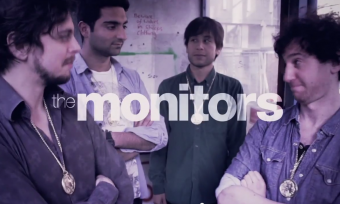 We made a little video for Big Chill Bar's A Hard Day's Night series, just to explain how we all me and why we do what we do. All 100% true, yup. Just aks Luigi.
Read More