I started writing this opening paragraph about how much like David Bowie the London four-piece Night Engine sound, but then I realised everyone has already done that. About a million times. Including myself about two months ago for a different site. But, as they say, a cliché is only a cliché because it’s true. But then, they would say that. The clichéd bastards.

There is, however, an odd synergy to Night Engine’s growing success and the recent reemergence of the Thin White Duke. Yet the latter’s musical offering upon his return was so dull that no one’s put it on since the release date (unless you have, you weirdo) while the former are a bunch of barnstorming boys with youthful optimism, here to batter you into submission with their ADHD melodies. In the chorus of ‘Worth Your While’ the backing vocals chant: “lift me up, I really want to dance, lift me up, I’ll make it worth your while,” like some sort of disco-flavoured sexual dare; a response to Sister Sledge’s ‘He’s the Greatest Dancer’ perhaps.

Born out of a childhood friendship, the sense of growing up, moving on and getting stronger is apparent throughout the lyrics. Despite titles such as ‘Young and Carefree’, so sweet Taylor Swift could use them, several songs do posses a dark tint. ‘Seventeen’ features the lyrics: “You think that you’re older, that I’ll never be stronger…I have to kill the man and you’re another… ”, indicating a simmering macho aggression towards a faceless aggressor (apparently it’s based on “a 17-year-old killer who has grown up in a criminal environment from which he can’t really escape”).

The adolescent frustration rears its pock-marked face elsewhere too: “Just ‘cause you’re older, doesn’t make you wiser” they declare on ‘Treat me Like A Baby’. These growing pains are off-set with blasts of retro synth and funk influenced bass lines, because when you’re growing up and confused and angry the best therapist is a big speaker with fast music you can dance to blasting out of it. Especially, in Night Engine’s case, if said music has been produced by Nile Rodgers.

Their tunes are energising odes to their musical ancestors, with the likes of INXS and Talking Heads held aloft as golden gods by the band, bringers of pace and entertainment to the blessed among us. There’s no escaping it, Night Engine are a fully-formed, hot-out-the-oven recreation of their influences, but damn do they taste good.

“I just feel restricted, give me a chance,” singer and guitarist Phil McDonnell chimes. It’s OK Phil – you’re going to be getting more than one chance with us… 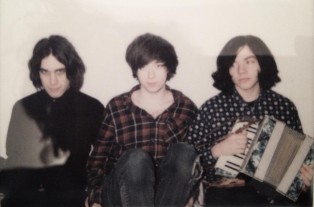 We had a truly great time at The Great Escape last weekend, notwithstanding that inevitable moment that occurs at the end of every visit to Brighton when you stand up to leave and realise that a) your wallet is empty; b) you're wearing your friend's clothes / a stranger's clothes / no clothes; and c) you can't actually stand up, and are instead gently rolling down a steep pebble 'n' seagull-shit incline towards a brown, churning sea. However, despite how much fun the festival can be, the fact that it's essentially the entirety of London's music industry relocating to the seaside for the weekend means that Brighton bands can actually find themselves surprisingly under-represented. From Blood Red Shoes to the magnificently-named Sea Bastard, several acts were conspicuous by their absence, while local favourites like AK/DK and Dark Horses had to make do with playing out of what looked like a burger van as part of the free Alternative Escape. The Wytches are another Brighton-based band who had to content themselves with being Alternative Escapists, playing several free sets across the weekend. We caught them at The Mesmerist on Thursday evening, and the fact they drew such a large, boisterous crowd (we had to cling to the banisters to ensure a decent view) to a pub not particularly well-equipped for sound or atmosphere is a testament to their moreish, boorish appeal. Beyond an ability to attract lost souls, there's an element of witchcraft about their formation too. When drummer Gianni and singer/guitarist Kristian stuck posters up around Brighton Uni looking for a bassist, third member Dan was the only person to respond; not only that, but he also “looked the spitting image of the guy Kristian drew on the poster”. They swiftly set about mixing up a concoction of Cramps cadavers, horror punk heebie-jeebies and Arctic Monkey's 'Humbug's, before distilling everything into a simpler, if no less potent spirit whenever things started “getting too complicated”. The samples we've tasted so far have proved devilishly delicious. 'Digsaw' is a blast of twisted psych-surf with vocals that have been Frank Black-ened to a crisp, while 'Fragile Male for Sale' sees Kristian sounding like Jack White trying to sail across a stormy sea on a raft made out of broken Rickenbackers. Début single 'Beehive Queen', a tune that leaps from side to side like an amphetamine-crazed crab, has a warm scuzziness that may have been enhanced by recording at Toerag Studios, while a touch of creepy organ adds some (puke-green) colour to b-side 'Crying Clown'. Always, however, it is monstrous riffs turning on evil semitone pivots that are the order of the day. It's the sort of thing that too many bands try to do half-arsed. The Wytches do it with an arse the size of Milton Keynes, which swings like a thick, meaty pendulum out of a pair of beer soaked, blood spattered jeans. It's an infectious sound that has seen them snatch prominent support slots with Metz and Temples, both of whom they share elements with – the raw power of the former but with better tunes, and the psychedelic tinge of the latter but much, much darker. There's also a dab of fellow Brighton rockers, the recently defunct (yet again) Eighties Matchbox B-Line Disaster – a band that frequently threatened great things but could never quite keep things together enough to deliver. Here's hoping that, having already put so many under their spell, The Wytches can build upon their early promise. If they don't, we're burning them at the bloody stake...
Read More