Kanye West might have an ego the size of PSY’s thorax (big enough to title his new album ‘Yeezus’ anyway), but it must have taken at least a little bruising after a couple of high profile snubs recently. Last week Tricky talked about how he’d once blanked Kanye, hilariously revealing: “I’ve been next to Kanye West – I stood next to him in a club and I looked at him and he looked at me and he thought I was going to talk to him. That’s never going to happen”.

Now it transpires that Tyler, The Creator turned down the offer of a Yeezy verse on his recent “Wolf” album, although the Odd Future man did admit that he talks to Kanye “almost everyday it seems like” (is it just us that detects a hint of “man, when will this guy stop calling?!” within that phrasing?).

Kanye West is also suffering from another common theme at the moment – fake tracklistings. Leaked song titles sent to Beats Per Minute were apparently misleading (although someone has worked out that “Yeezus” will contain fourteen tracks), and an album back cover supposedly posted by Drake’s Dad on Instagram and then deleted has also been called out by producer Boi-1da. According to the fakes, James Blake and Frank Ocean are set to appear on both albums, which seems unlikely if not impossible. The bigger question is – who has the time to mock up a fake album back cover?

(n.b. picture courtesy of someone awesome who we couldn’t find). 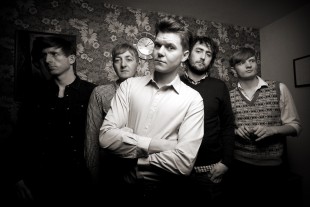 As documented in Graham Jones' excellent 'Last Shop Standing', record shops in Britain have had a troubled few years, leaving many towns without a single music retailer to call their own (not even a bloody HMV). This can hit musicians particularly hard, with no local outlet to sell their wares through. North-East indie band Frankie & The Heartstrings have therefore taken things into their own hands and, with the help of the local council, set up a new shop, Pop Recs, in their home town of Sunderland. As with many new record shops, they will be looking to diversify from simply flogging old vinyl, with a recreation and performance space included in the plans, which will see local favourites like the Futureheads performing during the opening fortnight, alongside artists like Bernard Butler and Badly Drawn Boy. There'll also be local coffee and beer available, and they've even got Pete Fowler to design the bloody mugs. It's a brilliant idea, full of the sort of self-starting enthusiasm that's necessary to launch such an enterprise in the current climate. The shop opens on June 1st.
Read More