We had a truly great time at The Great Escape last weekend, notwithstanding that inevitable moment that occurs at the end of every visit to Brighton when you stand up to leave and realise that a) your wallet is empty; b) you’re wearing your friend’s clothes / a stranger’s clothes / no clothes; and c) you can’t actually stand up, and are instead gently rolling down a steep pebble ‘n’ seagull-shit incline towards a brown, churning sea.

However, despite how much fun the festival can be, the fact that it’s essentially the entirety of London’s music industry relocating to the seaside for the weekend means that Brighton bands can actually find themselves surprisingly under-represented. From Blood Red Shoes to the magnificently-named Sea Bastard, several acts were conspicuous by their absence, while local favourites like AK/DK and Dark Horses had to make do with playing out of what looked like a burger van as part of the free Alternative Escape.

The Wytches are another Brighton-based band who had to content themselves with being Alternative Escapists, playing several free sets across the weekend. We caught them at The Mesmerist on Thursday evening, and the fact they drew such a large, boisterous crowd (we had to cling to the banisters to ensure a decent view) to a pub not particularly well-equipped for sound or atmosphere is a testament to their moreish, boorish appeal.

Beyond an ability to attract lost souls, there’s an element of witchcraft about their formation too. When drummer Gianni and singer/guitarist Kristian stuck posters up around Brighton Uni looking for a bassist, third member Dan was the only person to respond; not only that, but he also “looked the spitting image of the guy Kristian drew on the poster”. They swiftly set about mixing up a concoction of Cramps cadavers, horror punk heebie-jeebies and Arctic Monkey’s ‘Humbug’s, before distilling everything into a simpler, if no less potent spirit whenever things started “getting too complicated”.

The samples we’ve tasted so far have proved devilishly delicious. ‘Digsaw’ is a blast of twisted psych-surf with vocals that have been Frank Black-ened to a crisp, while ‘Fragile Male for Sale’ sees Kristian sounding like Jack White trying to sail across a stormy sea on a raft made out of broken Rickenbackers.

Début single ‘Beehive Queen’, a tune that leaps from side to side like an amphetamine-crazed crab, has a warm scuzziness that may have been enhanced by recording at Toerag Studios, while a touch of creepy organ adds some (puke-green) colour to b-side ‘Crying Clown’. Always, however, it is monstrous riffs turning on evil semitone pivots that are the order of the day.

It’s the sort of thing that too many bands try to do half-arsed. The Wytches do it with an arse the size of Milton Keynes, which swings like a thick, meaty pendulum out of a pair of beer soaked, blood spattered jeans. It’s an infectious sound that has seen them snatch prominent support slots with Metz and Temples, both of whom they share elements with – the raw power of the former but with better tunes, and the psychedelic tinge of the latter but much, much darker.

There’s also a dab of fellow Brighton rockers, the recently defunct (yet again) Eighties Matchbox B-Line Disaster – a band that frequently threatened great things but could never quite keep things together enough to deliver. Here’s hoping that, having already put so many under their spell, The Wytches can build upon their early promise. If they don’t, we’re burning them at the bloody stake… 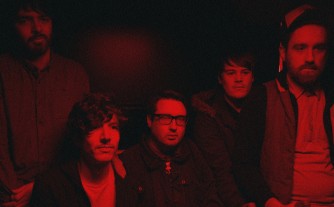 A few weeks ago we hit Sheffield, birthplace of Pulp, Arctic Monkeys, Warp Records, The Human League, and, er, Reverend & The Makers, for a dynamite weekend event called Detestival. It was two days of heavy, hairy and occasionally avant-garde guitar-based mania. Ranging from raging rock’n’roll duo Wet Nuns to pulverising psyche-noise four-piece Bo Ningen. On day one, fairly early on, a band from Leeds and Nottingham popped up called Hookworms. They’re a band who've built up a decent following making experimental, electronic-based krautrock in the same vein as Loop and 'XTRMNTR'-era Primal Scream. They’re pretty damn good. Four weeks later, their debut album is released on tiny indie label Gringo Records. Next thing we know it's hit the number 16 spot in the UK mid-week Record Store album chart slot, and the pre-sale release has sold out. Er. Just to put this into perspective, the Top 20, in both the album and singles charts, has been a no-go zone for ‘bands’, especially ‘indie bands' for a long, long time. Arctic Monkeys’ ‘R U Mine’ was the last single which troubled the upper echelons of the singles chart in recent memory. Albums always fare a little better, but the higher ends of the chart is still dominated by either the big guns (Kasabian, Coldplay) or the international celebri-poppers (Rihanna, Kanye West). This isn't to say smaller acts hardly sell anything; a lot of sales will come from the merchandise stall while on tour, or over a long period of time. Yet somehow a band with a cult following who sound nothing like your average chart fodder have managed to prove that off-beat, niche acts can still shift large amounts of records, despite not even being a headline band at events like Detestival. Although we expect that to change soon... Whatever the reasons, it’s proof that the underground scene is very much alive and well. Forget the naysayers who’ll ask, “who are Hookworms?” and join in with everyone else who’s getting in on the act. And remember to buy a copy of the record - having your mind blasted by their hypnotic rhythms and effects-laden guitars is a form of therapy cheaper, and more enjoyable, than acupuncture, CBT and colonic irrigation put together. Hook yourself up. Nicholas Burman
Read More