Four weeks later, their debut album is released on tiny indie label Gringo Records. Next thing we know it’s hit the number 16 spot in the UK mid-week Record Store album chart slot, and the pre-sale release has sold out.

Just to put this into perspective, the Top 20, in both the album and singles charts, has been a no-go zone for ‘bands’, especially ‘indie bands’ for a long, long time. Arctic Monkeys’ ‘R U Mine’ was the last single which troubled the upper echelons of the singles chart in recent memory. Albums always fare a little better, but the higher ends of the chart is still dominated by either the big guns (Kasabian, Coldplay) or the international celebri-poppers (Rihanna, Kanye West).

This isn’t to say smaller acts hardly sell anything; a lot of sales will come from the merchandise stall while on tour, or over a long period of time. Yet somehow a band with a cult following who sound nothing like your average chart fodder have managed to prove that off-beat, niche acts can still shift large amounts of records, despite not even being a headline band at events like Detestival. Although we expect that to change soon…

Whatever the reasons, it’s proof that the underground scene is very much alive and well. Forget the naysayers who’ll ask, “who are Hookworms?” and join in with everyone else who’s getting in on the act. And remember to buy a copy of the record – having your mind blasted by their hypnotic rhythms and effects-laden guitars is a form of therapy cheaper, and more enjoyable, than acupuncture, CBT and colonic irrigation put together. Hook yourself up. 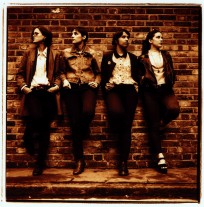 Over the last 9 months or so, Savages have been the band on everyone’s lips. Indeed, every label in the Beggars Group (XL, Rough Trade, 4AD and eventual victors Matador) requested to sign them. It’s been the most refined, well-calculated band profile construction in recent memory. Apart from a couple of limited vinyl releases - first single ‘Husbands’ and follow up live EP ‘I Am Here’ - the amount of music available to an increasingly large and slavering crowd of devotees was pretty slim until this week, when Savages finally released their debut album, ‘Silence Yourself’, into the world. Born from the Pop Noire label, which also hosts frontwoman Jehn Beth’s other band, John & Jehn (them being a married couple and mutual muses), they’re a band who display bold maxims on their website along the lines of: “experience your life differently, your girlfriends, your husbands, your jobs, your erotic life and the place music occupies in your life”. So far, so arty. What the album manages to do is take their proto- and post-punk and goth influences (Black Sabbath, Siouxsie & The Banshees, Bauhaus, Patti Smith) and put them into a neat forty minute album that rattles, shakes, booms and pounds its way through your stereo. They’re not original ideas by any means, but the way Savages reattribute the messages of self reliance, independence and aggression in a music scene saturated with primary-coloured, meekly safe semi-pop tones is much welcome in my book. It’s not hard to see what the indie label scene saw in them in the first place; their furious dedication to their music sets them in the same stall as the likes of the Pixies, Jack White, and Sigur Ros (with whom they share management). It’s on stage that they really get down to business though, being four darkly-clothed and charismatic characters who give off an odd juxtaposition of professional dedication and punk aesthetic. Jehn Beth’s rapid-fire head movements and clenched fist performances make her look like she’s preparing for a brawl. Her sexually ambiguous lyrics, brooding, mean and delivered with a spiky intensity, are among the highlights of the act. You may catch them performing 'sonic simultaneous poetry' with pals (and equally uncompromising noise-makers) Bo Ningen in art galleries now and again. There’s also a YouTube video project of live performances where the sound is replaced with high-pitched noise. Did we mention they were arty? We meant it. On the basis of ‘Silence Yourself’, so do they. Nicholas Burman
Read More