When composing music, or anything else, it’s almost impossible not to be influenced by your environment. Indeed, in some cases musicians go out of their way to take inspiration from their surroundings – think about Kraftwerk’s synthesized reflections of the infrastructure around them, or how the Stooges supposedly increased the volume and harshness of their sound to imitate the clanking industry of their native Detroit. Or, to put it another way, how could a band as brash, crass and plastic as The Killers have come from anywhere but Las Vegas?

Emika, whose 2011 debut album was one of the most sonically captivating albums of that year, also produces music that carries a distinctive imprint of its environment. Well, two environments actually: Bristol, where she lived while studying creative music technology, and Berlin, where she ‘found herself’ post-graduation.

The essence of these locations is clearly audible in her work. The wall-wobbling levels of bass match those you can hear thundering out of Bristol basements on any given night, while the urbanised melancholy that imbues her work has parallels in that of Bristolian icons like Portishead and Burial. Elsewhere, the clinical attention to detail and ability to make something that sounds huge yet sparse owes something to similar characteristics found in Berlin’s techno scene.

Indeed, it was the German capital’s legendary Berghain club that provided the last piece of the puzzle for Emika. After accidentally knocking the needle off a record while collecting her jacket, she found herself stunned as she listened to the resonant vibrations slowly reverberating through the gigantic building (oblivious to the angry glares of her fellow clubbers). Transfixed by the richness of the sound, she went on to record different parts of the Berghain, which were then used as the building blocks for a compilation to celebrate the club’s fifth birthday.

Her own composition ‘Cooling Room’ was one of those featured, while you can also (just about) hear the sleazy creak of the club’s notorious sex swings at the end of her song ‘Be My Guest’. Indeed, she explained an important distinction between herself and many of her peers in an interview with The Quietus: “I don’t really understand why electronic music has to always be ‘tracks’, and has to always be sound effects…there can be so many possibilities of what makes people dance or not dance…and there are so many things you can do with music and sound”.

She demonstrated exactly what she meant on her debut album, a record of incredible depth and imagination that managed to sound both sensual and austere, utterly spacious and yet crammed with ideas. Her new album, ‘Dva’, will hopefully provide those same enticing contradictions, and the early signs are that it could be even better.

Indeed, from the digital dub elements of lead single ‘Searching’ to the Teutonic delivery of ‘She Beats’, via the gigantic bassline that she wields like a bloody great big battleaxe on ‘Sing To Me’, it’s clear she’s still thoroughly in control of her art; and that’s before you even get to her James Blake-esque take on Chris Isaak’s ‘Wicked Game’, a song which few would dare to cover.

Few people would fancy supporting Amon Tobin on his ISAM tour either, considering the main event is one of the most eye-popping extravaganza’s in electronic music, making Kraftwerk’s recent 3D shows look like they were created on a malfunctioning Atari ST. Emika’s understated, slower-paced and generally much more minimal (though no less loud) live performances couldn’t be more different than the Brazilian’s, but yet his audience seemed hugely receptive to her music regardless.

You imagine this is down to both artists having an extraordinary dedication to the sounds they produce. But while Tobin is definitely a creator of tracks – and mental, meandering, disjointed tracks at that – Emika crafts her experiments into songs of sinister beauty that few would be capable of imitating. Bristol and Berlin may have shaped her sound, but you suspect hers is a talent that would have bloomed wherever it took route… 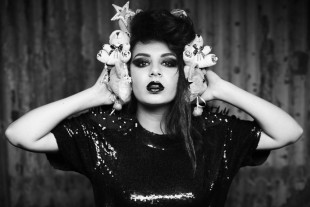 For most fifteen-year-olds, getting into warehouse parties can be a struggle. First you've got to find a believable story to convince the 'rents that you're not actually going to a warehouse party, and shortly afterwards, when they see through your pitiful pubescent lies, conceive a practical late-night exit strategy from your bedroom. Then there's getting there, getting in, getting wasted and getting back, all of which create their own issues. Charlotte Aitchison, better known as Charli XCX, didn't have any of these problems. Rather than chain their daughter to the radiator, her parents funded self-recorded singles like '!Franchesckaar!' and 'Art Bitch' when Aitchison was aged just fourteen (she's since paid them back), and after uploading them to Myspace she soon found herself attracting the attention of an East End rave promoter. When asked for a stage name, she went with her MSN Messenger ID: Charli XCX (although she later told her less-than-amused label that it actually stood for 'Xrated Cunt Xrated'). Having been largely influenced by contemporary songwriters like Lily Allen and Kate Nash up until that point, her experiences in the warehouse scene soon saw her adding an Ed Banger-influenced dance edge to her pop tunes, along with some of the bolshy attitude of long-time favourite, Uffie. Aitchison describes her music as "purple pop music...moody, emotional and rich", seeing herself sitting alongside artists like Grimes and Sky Ferreira, whom she recently shared a V Magazine cover with: "I really feel like the three of us are pushing boundaries and writing songs that actually mean something," she enthused, "these are not the shallow "I'm in the club" songs". "Gothic pop music," is another description she's used, although she is very much on the pop side of that particular coin (with Zola Jesus perhaps on the other). Brash, catchy and capable of producing the odd curveball, her recent album 'True Romance' has managed to garner hype from PopJustice and Pitchfork alike. Partly this is thanks to some choice sampling of artists like Blood Diamonds, Paul White and mystery man of the moment Jai Paul (aka the world's most creative, clueless or conniving internet self-publicist going, depending on your opinion), while Gold Panda's 'You' forms the basis of her best track, 'You (Ha Ha Ha)'. She's admitted that her music is conceived visually as much as aurally ("I know when I’ve written a good song when I can imagine the video") and the 'You (Ha Ha Ha)' video features a surprising amount of gunplay for the brainchild of a young girl from Hertfordshire. This proved briefly controversial in the aftermath of the Sandy Hook shooting, although considering the bullets in the video are substituted for lipstick, that may have been a somewhat knee-jerk reaction. Her 'goth' side comes out most clearly on tracks like 'Stay Away', with Sisters of Mercy-worthy lyrics like: "You choke my throat / With words of wonder / You make it hard to breathe / Your love so cold / Just like an arrow / Pierced through my skin I bleed", while at other points she sounds almost like a young, female Tricky. Even when the music is pure pop such as on 'Set Me Free (Feel My Pain)', which could have been written for Rihanna or Jessie J and has a chorus worthy of Aitchison's beloved Spice Girls, the lyrics are much more visceral than on your average pop track. Lines like "I feel the skin dripping from my bones" add a nice touch of lurid zombification to what's otherwise a straightforward heartbreak number. Another thing that elevates her above the general pop mush is her rapping ability. The crush-centric 'What I Like' casts her as a kind of British Kitty, but her most ear-catching performance is on 'So Far Away', where her deadpan delivery is frequently spat out in polyrhythmic triple-time, against a background of flashing lights that makes you feel like you're speeding around the M25 at midnight. It's a direction it'd be interesting to see her explore more of in future, although it's hard to imagine her taking it right now. "I never wanted to be cool, or make a hipster record," she has affirmed, "I’ve wanted to write good pop music, beautiful pop music". 'True Romance' shows she has the talent to do just that, but should her label decide to re-evaluate the potential of 'Xrated Cunt Xrated', we'd be intrigued to hear the results...
Read More